Teamsters members march in support of International Workers Day on May 1, 2019 in Los Angeles. A year later, Teamsters was one of several major unions that lost members due to the coronavirus pandemic.
Photographer: David McNew/Getty Images

At least 13 of the largest U.S. unions lost members as the coronavirus pandemic overwhelmed the U.S. economy last year, presenting a new setback for a labor movement already in decline.

The breadth of those losses varied by industry, though some public-sector unions managed to gain members, buoyed by essential worker designations, according to a Bloomberg Law analysis of financial disclosures filed recently with the U.S. Labor Department. Hospitality took the brunt of the pain, with the UNITE HERE union losing a staggering 56% of its members, while some manufacturing and private-sector unions escaped harder hits from the impact of virus-induced layoffs.

The disclosures, which are required annually under the Labor-Management Reporting and Disclosure Act of 1959, offer the most detailed picture yet of how the pandemic-fueled recession disrupted organized labor, underscoring the disparate levels of success unions have had in preventing layoffs.

The Bureau of Labor Statistics said in January that the share of U.S. workers belonging to unions fell by 2.2% in 2020, but the new itemized disclosures show that some unions suffered far worse, while others, particularly in the public sector, fared better.

The Teamsters, the nation’s fourth-largest union, representing a mix of workers from court clerks to bus drivers, had its membership drop by 9%, losing 123,000 workers, while the International Association of Machinists and Aerospace Workers, which represents employees at Boeing and many other companies, lost 13% of its ranks, or 44,000 workers. 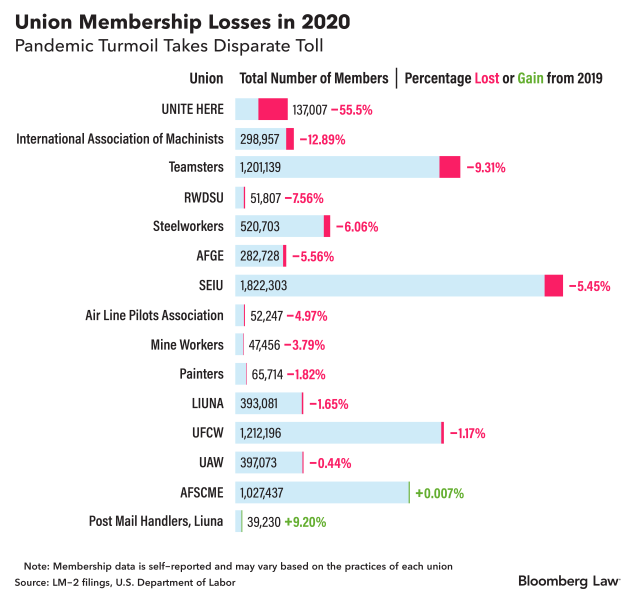 Before the pandemic upended the workplace, UNITE HERE represented 308,000 hotel, casino, and other hospitality workers. After the virus took hold a year ago, the union said 98% of its members were unemployed. The 55% decline in its membership indicates that some members returned to the fold when states lifted restrictions, but it also suggests some hospitality jobs may be gone for good.

“It kind of mirrors what’s going on in terms of sectors that have been devastated by the pandemic versus those that have either benefited or not been affected that much,” said Ruth Milkman, a labor sociologist and professor at the City University of New York. “Most of these [unions] are more specialized. And so, really, their fate is tied to that of their industry.”

While the data sheds light on the state of the labor movement, it’s also an incomplete picture. Union membership data is included in disclosure reports known as LM-2s, which private-sector unions are required to file annually, along with some public-sector unions that represent small numbers of private-sector workers.

Some unions file in late March while others do so in September, depending on their fiscal year cycle. As a result, a fuller picture of the pandemic’s toll on organized labor will likely emerge later this year, when the latter batch of forms is released.

While the reports are useful for tracking individual unions, nuances in the reporting process can make it difficult to compare one union to one another.

For instance, some unions still count out-of-work members among their ranks, especially in sectors where membership is seen as a mark of professional credibility. Other unions cancel membership the moment a worker leaves their job.

Still, the numbers show the endurance of public-sector unions, which had a unionization rate five times that of the private sector last year. In addition to higher density, public-sector unions also benefited from the fact that many of their members were considered essential, making it harder for them to be let go.

“We’ve got a lot of health-care workers, sanitation, corrections, and they weren’t getting proper PPE,” or personal protective equipment, said Lee Saunders, president of the American Federation of State, County and Municipal Employees, which gained a small amount of members. “We were trying to protect their jobs every single day. So, clearly, they saw the advantage of a union, because if the union was not there, they wouldn’t have had a voice, they wouldn’t have had a seat at the table.”

By contrast, private-sector unions were largely at the mercy of industry.

The Machinists union, which represents aerospace and defense workers, took a big hit when Boeing cut more than 25,000 workers in response to commercial airlines’ dramatic decline in business. Union officials didn’t respond to requests for comment.

The Air Line Pilots Association was less affected, suffering a loss of about 5% of its membership, 8 percentage points less than the Machinists.

Global construction stoppages set off a cascade effect that came back to bite U.S. workers, decreasing demand for steel at overseas mills powered by U.S. coal. Four mines closed as a result, putting nearly 2,000 union miners out of work, United Mine Workers of America spokesman Phil Smith said. The union reported losing 4% of its members, though Smith said one of the mines has since reopened.

Unions in other industries weathered the pandemic remarkably well. The United Auto Workers lost less than 1% of its members, about 1,800 workers, despite a corruption scandal that put two former union presidents behind bars.

That’s probably because the auto industry remained stable. Stock prices for , , and have all surpassed pre-pandemic levels.

“The bottom line is that the UAW ended the year balanced with modest growth and the strike fund continued to grow at a healthy pace,” Secretary-Treasurer Ray Curry said in a statement. “In addition, with our new stringent internal and external auditing, members can be assured that these financial results reflect the solid way in which the union has handled such a challenging year.”

Collectively, unions succeeded in other respects last year. Contracts ratified in 2020 won workers average pay increases of more than 3%, which, while lower than the gains of recent years, was still higher than at any point during the recovery from the Great Recession.