Union-negotiated pay raises saw a month of weaker overall gains, putting the brakes on a strong showing for unions even before the economy began slowing down because of the novel coronavirus, Bloomberg Law data shows.

Unions negotiated an average 3.4% wage increase to take effect in the first year of their agreements, based on 196 contract settlements added to Bloomberg Law’s database so far this year. That’s down one-tenth of a percent from two weeks ago. This is the second straight biweekly period in which the database average declined. The last two consecutive drops of average pay increases took place in February 2019.

The weaker union wage gains likely aren’t connected to business concerns about the ongoing coronavirus pandemic, according to Bloomberg Law analyst Robert Combs. About half of the records entered into Bloomberg Law’s database in the most recent update were ratified in the previous two weeks or earlier.

“A lot of the contracts reflected in our report were negotiated before the scope of the outbreak became a nationwide issue and the most stringent economic measures began,” Combs said.

Instead, Combs said the back-to-back decreases are likely a correction from a high of 3.8% in February. The current average is still higher than at this point last year but more in line with first-quarter data at this point in 2018 and 2019. 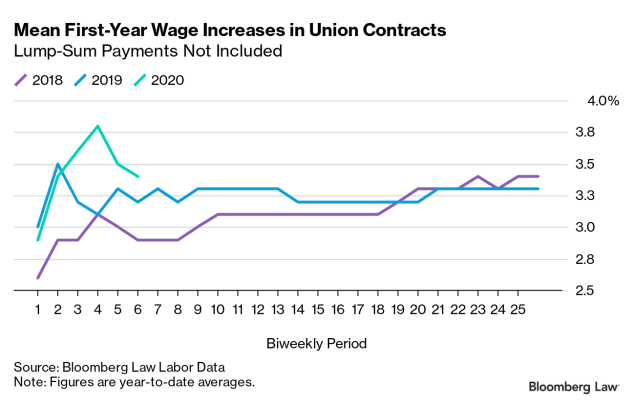 The decline is due to decreased pay raises across all sectors. Manufacturing, nonmanufacturing, and state and local government workers all saw average first-year wage bumps decline by one-tenth of a percent.

The largest contract added to the database in recent weeks was a three-year collective bargaining agreement between the U.S. Postal Service and the American Postal Workers Union that was awarded through a mandated binding arbitration process March 11. About 200,000 postal workers received a 1.3% first-year wage increase through the arbitration award. The union and postal service couldn’t reach an agreement on a new labor deal after a previous contract expired in September 2018.

Another pair of agreements added to the database provided more than 24,000 employees at Safeway and Giant food stores with a 20-cent to 40-cent per hour raise for most workers in the first year of the agreements. The Washington-area grocery workers are affiliated with the United Food and Commercial Workers Local 400 and ratified the labor pacts March 5.