A labor-friendly electric vehicle tax credit is likely to withstand scrutiny by the Senate parliamentarian on whether it should be included in Democrats’ nearly $2 trillion tax and social spending plan, according to former Congressional budget staffers and policy analysts.

If that happens, and opponents like Sen. (D-W.Va.) withhold support of the broader package, lawmakers will need to negotiate a change to the credit, although it’s unclear whether that will be necessary. The credit could also be chopped altogether.

The proposed $4,500 tax credit would be available to consumers who buy U.S.-made, union-assembled electric vehicles. It’s slated for a review by the parliamentarian, whose role is to determine whether it hews closely enough to budget rules to be included in the package. The massive measure is being advanced through a budget reconciliation process to allow Democrats to pass the bill with a simple Senate majority.

Foreign markets, ’s Elon Musk, and Manchin have denounced the tax credit, making its fate dubious in the overall political landscape that relies on every vote in the evenly split Senate.

Political uncertainty aside, people well-versed in Congressional budgetary matters say the item could clear the Byrd rule—a test of whether an item is budget-related and therefore qualifies for reconciliation.

“I don’t know how that can be a violation of the Byrd rule, because it is a term and condition upon which you qualify for the credit,” said G. William Hoagland, the senior vice president of the Bipartisan Policy Center. He served for 25 years on the U.S. Senate staff, including as director of budget and appropriations in the office of former Senate Majority Leader Bill Frist (R-Tenn.) from 2003 to 2007. “I’m at a loss here to figure out how you challenge this.”

Several criteria must be met for a provision to fall short of satisfying the Byrd rule, including if the policy “produces changes in outlays or revenues which are merely incidental to the non-budgetary components of the provision,” according to the House Committee on Rules.

A separate former senior Republican staff member said that there shouldn’t be a concern with the labor-friendly incentive under budget rules, considering it’s an amendment to an existing tax incentive. The $4,500 would be available in addition to a base credit of $7,500 available for most consumers purchasing an electric vehicle. 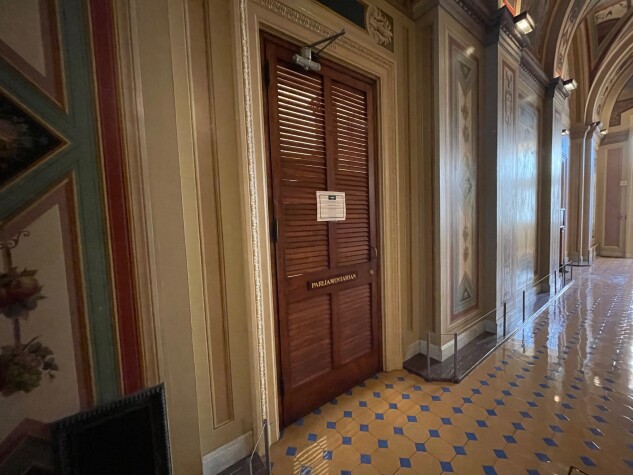 The office of the Parliamentarian of the U.S. Senate.
Photo: Ellen M. Gilmer/Bloomberg Government

“It’s going to have to rise or fall on its merits,” said the former staffer, who asked not to be named. “The Byrd rule is not the problem.”

Rep. (D-Mich.), an arch supporter of the union language, said lawmakers are trying to work with Manchin on acceptable language. “So far, he hasn’t offered anything.”

Kildee said one option would be to “reward high labor standards” in the tax credit by basing it on automakers that have good wages, benefits, worker protections, and worker safety records.

Hoagland said proponents could rebut a parliamentary challenge to the union language by saying it’s a necessary subsection for receiving the additional credit.

Opponents say the union-made criteria is a violation of federal labor law that gives Senate parliamentarian a reason to rule against it.

They say the violation works like this: Some non-union companies have had at least one election in which a union was voted down.

“The additional incentive being given for those with a union retaliates against those who voted against the union,” said Kristen Swearingen, chair of the Coalition for a Democratic Workplace, an organization that represents businesses concerned about regulatory overreach by the National Labor Relations Board, in an emailed statement.

“This issue is not about adding money to the pot as part of reconciliation, it’s about giving a kickback to the unions,” she said. “That has zero to do with budget issues and all about policy.”

To contact the editors responsible for this story: at fjohnson@bloombergindustry.com; at mmuellerneff@bloomberglaw.com