Union elections dragged on for longer in 2020 than in the previous four years, reducing the chances of victory for organized labor, a Bloomberg Law analysis of federal data revealed.

The median time between the filing of an election petition with the National Labor Relations Board and voting being held was an entire week longer in 2020 than in the four prior years —31 days compared to a median of 24 days from 2016 through 2019. The 2020 figure also topped the single-year median for each year between 2016 and 2019.

While the Covid-19 pandemic slowed many contests, data from the past eight years demonstrates how NLRB policies from both Republican and Democratic administrations profoundly affected the pace and outcome of union elections—a dynamic that could increasingly hold sway over unions in 2021.

The 2020 numbers align with the advent of the pandemic but also reflect the impact of employer-friendly changes to election procedure that the Republican-led board enacted; a scaled-back version of those moves took effect in June after a court challenge.

The Trump board’s new policy sought to reverse changes from the Obama administration that had simplified and accelerated certain election procedures—an outcome employers had perceived as beneficial to unions.

The 2020 data showed more time clearly made a difference: 127 elections lasted 60 days or longer, compared with just 56 elections of that length, on average, from 2016-2019. In the 60-plus-day elections in 2020, win rates for organized labor were 19 percentage points lower than in contests that lasted two weeks or less.

In the year ahead, the board’s revisions threaten to erase organizing gains unions had made over the past four years based on 2015 rule changes that sped up the process, the statistics show. The latest changes have restored the time-based leverage employers had enjoyed before 2015, when they had a larger window to make their case to workers.

Observers cautioned, however, that it’s hard to definitively attribute longer union elections in 2020 to the new NLRB policies because of the unprecedented challenges the pandemic has created. The board also reported a sharp drop in total elections, making comparisons to prior years more difficult.

NLRB Chairman John Ring, a Republican, declined through an agency spokesman to be interviewed for this story. 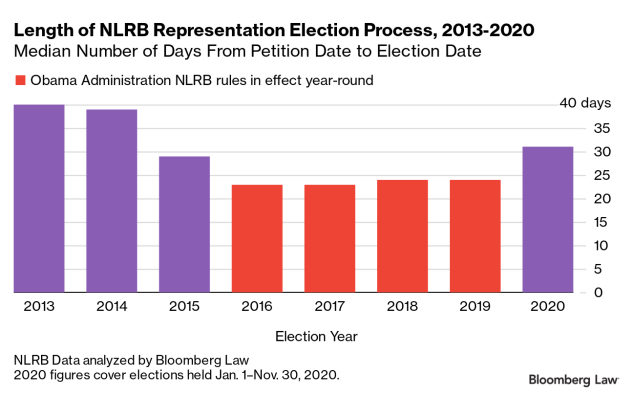 Bloomberg Law’s analysis, which evaluated hundreds of records from an internal database of union elections, provided a fuller picture of the impact of the board’s policy changes over the last two presidential administrations. The findings add depth to the conventional belief that shorter elections favor unions while longer ones help management. 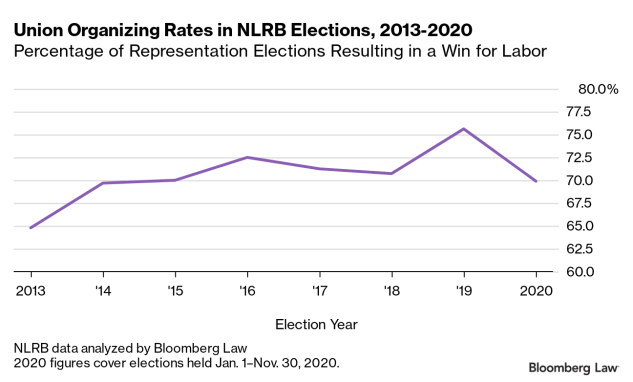 What’s in a Change?

The Obama-era rule sought to eliminate procedural roadblocks to elections. Disputes over composition of a bargaining unit or voter eligibility were delayed until after an election was held. Pre-election hearings were scheduled for eight days after the board had given notice of the hearing. And regional directors were instructed to certify election results even if the employer planned to appeal.

The NLRB’s changes under Trump weakened many of those requirements, extending a variety of procedural deadlines and stipulating that bargaining unit disputes should be litigated before an election takes place.

The AFL-CIO sued to block the changes, arguing that the board improperly rolled out the final rule without soliciting public comment. In May, a federal judge struck down key elements of the Trump board’s rule while allowing other portions to take effect.

A decision by the Trump board in 2017 also gave employers more latitude to dispute the scope of a proposed bargaining unit.

In PCC Structurals, Inc., the board overturned an Obama-era decision that prevented an employer from challenging a bargaining unit—specifically, which workers should be included—unless they could demonstrate that the workers requested by management had “overwhelming” commonalities with the rest of the workplace.

That strategy was on display this month at a series of hearings over a union vote at an warehouse in Alabama. After an NLRB adjudicator rejected the union’s request to postpone litigation over the bargaining unit’s composition, Amazon attorneys spent days calling witnesses to support their argument that thousands more employees should be included—a prolonged exercise that organized labor viewed as a stall tactic. 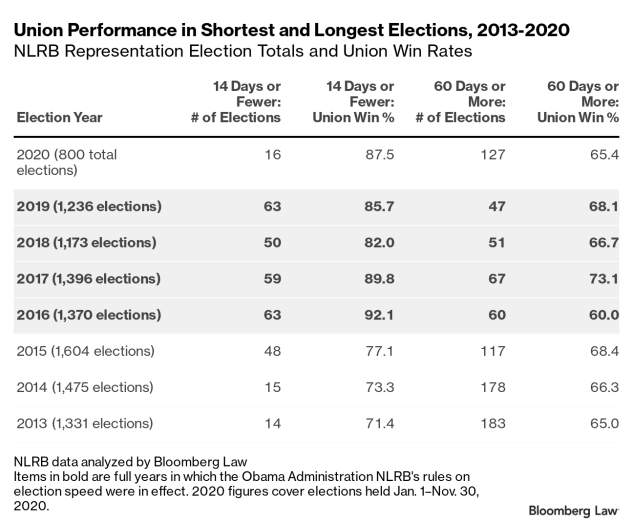 Management-side attorneys don’t dispute that unions fare better with shorter elections. But in their view, the Obama-era rule deprived employers of adequate time to present their case to workers.

Organized labor allies argue that shorter elections give bosses less time to pressure in-house union supporters. But Marshall Babson, a former NLRB member who represents employers for Seyfarth Shaw, said that perhaps union success rates are higher in shorter elections because workers hear only one side of a complex argument—similar to a jury being asked to render verdict without hearing defense testimony.

“Try to imagine a political debate where one of the candidates gets up and speaks, the other one sits down, and the moderator says that’s the end of the debate,” he said. “That’s not the way it’s supposed to work.”

Some unions still ran sizable campaigns in 2020. In December, the Retail, Wholesale and Department Store Union successfully waged the largest campaign in New York state in 2020, organizing some 600 employees at Housing Works, a nonprofit that fights homelessness and AIDS.

Even NLRB experts who opposed the policies enacted during the Trump administration were hesitant to read too much into the 2020 statistics, noting that the pandemic paused elections for three weeks this spring and forced the NLRB to switch to mail-in ballots.

The board recorded 800 union elections through the end of November. That’s far lower than the average of 1,300 in the seven years prior, suggesting that pandemic-related logistical barriers suppressed unionization efforts.

“You have a hard time in 2020 proving anything with statistics,” said Lafe Solomon, who served as NLRB acting general counsel under Obama.