The White House is reflected in a puddle in Washington, D.C. President-elect Biden has stocked his transition team with policy experts, academics, and former Obama administration officials, a contrast with the industry-friendly figures President Trump sent into the government upon winning office.
Photographer: Michael Reynolds/EPA/Bloomberg via Getty Images

President-elect is poised to make regulation a centerpiece of his administration, and his success will depend on who he picks from a slim pool of bureaucrats willing to accept one of the least-glamorous jobs in Washington.

Without strong backing in Congress to carry out his campaign promises, Biden will need expert leadership over the little-known White House Office of Information and Regulatory Affairs; someone with the technical expertise to ensure regulations survive judicial review, and the political acumen to navigate competing agency interests.

There are few people with the economics and policy expertise to take on the role. The likely candidates mentioned by academics and congressional staff for Biden’s OIRA administrator are familiar faces in the regulatory community and have a long history of public service, including Richard Revesz at New York University; Michael Fitzpatrick, who served in OIRA under Obama and Clinton; Cary Coglianese at the University of Pennsylvania; and Michael Greenstone at the University of Chicago.

A spokesman for Biden’s transition declined to comment on specific names. Coglianese said in an email that he has no affiliation with the Biden campaign but would be “honored” if selected for the post. Revesz, Fitzpatrick, and Greenstone declined to comment.

The president-elect is prioritizing certain values among his nominees, his transition spokesman said, including diversity of ideology and background, talent, ethical standards, and transparency.

Democrats tend to use OIRA to coordinate policies across agencies, while Republican administrations view the office’s primary job as cutting the cost of regulations, said Jennifer Nou, a former OIRA analyst under President .

The coordinating role of OIRA will be especially important for Biden, who has outlined plans to leverage every federal agency to tackle his four main policy priorities: climate change, racial justice, an economic downturn, and the coronavirus pandemic. He’s expected to ask all departments to integrate action on those administration-wide priorities into their individual policy initiatives, regardless of a department’s traditional job description.

OIRA fine-tunes rules penned by individual agencies. It doesn’t dictate priorities; instead, it makes sure each agency’s proposals align with the president’s policy preferences and don’t contradict another department’s perspective on an issue. 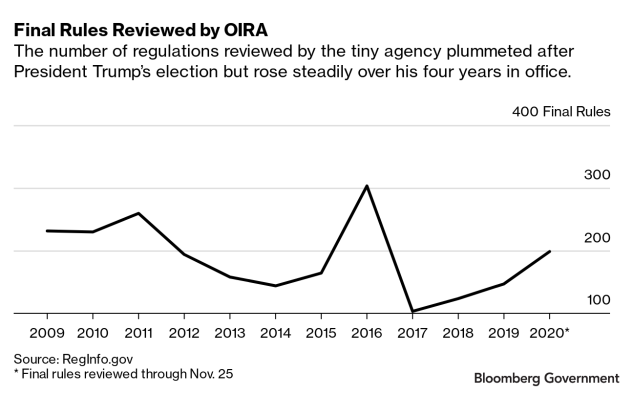 The office’s importance “depends on how the president chooses to use it,” said Renée Landers, a former chair of the administrative law section of the American Bar Association. An OIRA administrator must be well-versed in Biden’s policy agenda and have the president’s confidence, Landers said.

All newly elected presidents have an array of options for reversing their predecessors’ regulatory legacy, and analysts predict Biden will start on his first day in office by freezing all Trump administration rules in the pipeline.

The last five presidents of both political parties on their first day in office have had their chief of staff issue an order to stop work on all pending regulations effective a minute after midnight on Jan. 21.

Stop orders give the new president’s appointees time to review all the regulations pending from the previous administration and decide which should move forward and which to hold back. Some orders give a particular time frame for how long the stop will last.

“Nothing moves until someone from the incoming president’s team approves something moving,” said Sally Katzen, professor of practice at the New York University School of Law and former OIRA administrator in the Clinton administration.

Over the next few months, Biden transition officials are also expected to review all of Trump’s executive orders and recommend which should be eliminated.