An Uber Technologies Inc. sticker is displayed on a vehicle in the Time Square neighborhood of New York on May 8, 2019.
Jeenah Moon/Bloomberg

In one fell swoop, and on Tuesday fended off labor protections that were decades in the making, allowing the companies to keep compensating their drivers as independent contractors.

By design, very little will change under the ballot measure approved by California voters that was underwritten by the ride-hailing companies, along with , and

While Proposition 22 requires these app-based transportation services to offer some modest new perks for drivers, it protects them from having to provide much costlier benefits that full-time employees get.

For the companies, that makes the more than $200 million they and their supporters spent on the ballot measure campaign -- a record for the most populous state -- worth every penny, according to , a professor at Stanford Law School.

“Two hundred million plus is much cheaper from their perspective than paying the employees these benefits that the legislature has established for them,” said Gould, a former chairman of the National Labor Relations Board under President . 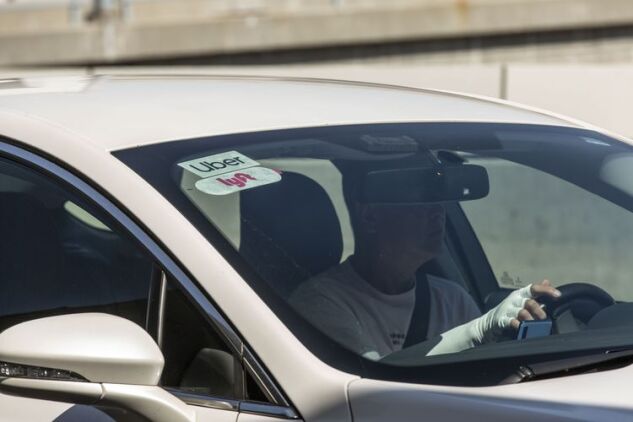 Lyft Inc. and Uber Technologies Inc. signage are displayed on the windshield of a vehicle at Los Angeles International Airport
Photographer: Allison Zaucha/Bloomberg

Shares of Uber and Lyft surged the most in several months on the election outcome. Lyft’s stock advanced 12% by 11:40 a.m. in New York trading, while Uber was up 13%. The Wednesday reflects not just the stakes in California but also expectations of what will happen elsewhere.

By establishing a template for a hybrid classification of worker that breaks from the traditional employee-or-contractor mold, Proposition 22 may have broader ramifications. If the rule works out well for both the workers and companies it could influence a push for legislation in other states or on the federal level, legal experts said.

“Legal pushback may continue, but Proposition 22 sets the tone for other states to follow in recognizing gig workers as a central part of today’s economy and the future of work,” said Jesse Jauregui, partner with Alston & Bird. “Proposition 22 is pointing to a new ‘third way’ of structuring the nature of work and may become the model for other gig workforces to follow.”

Uber and Lyft have long pushed federal and state lawmakers to adopt a “third classification.” Some federal lawmakers have also pushed “portable benefits” that would give some benefits to drivers, but not give them the full employment entitlements or put the companies on the hook for liability.

By no stretch is Tuesday’s vote a global panacea for the ride-hailing industry, which has been ravaged by the coronavirus pandemic.

Uber and Lyft will continue to face court challenges to their labor model elsewhere in the U.S. and abroad. Uber is fighting a suit by the attorney general in Massachusetts similar to the crackdown it faced in California. New Jersey and Connecticut also have strict standards like those adopted last year in California that boosted benefits for workers across a range of industries.

In London, the U.K.’s highest court is expected to issue a final decision before the end of the year in Uber’s five-year fight to keep its drivers from being reclassified as employees.

But in their home state, the ride-hailing and delivery service companies no longer have to worry about the state attorney general to comply with Assembly Bill 5.

For Uber and Lyft, Proposition 22 also amounts to a hall pass from landmark decisions by the California Supreme Court dating back to 1989 that define who’s an employee in what’s widely considered an employee-friendly state.

“It’s shocking, it’s so bizarre, that this basic right could be put to the voters in an election in which deep pockets can influence something so important to the people,” said attorney Shannon Liss-Riordan.

The Boston-based lawyer has been the ride-hailing companies’ in dozens of California lawsuits she’s filed on behalf of drivers over seven years seeking benefits including a minimum wage, sick pay and worker’s compensation.

Uber and Lyft still face for how they treated drivers prior to Proposition 22, despite reaching settlement agreements to resolve previous lawsuits, Liss-Riordan said. The majority of California drivers didn’t take part in those deals and can still sue, she said.

In lieu of full employee benefits, Proposition 22 requires the companies to put in place a slimmer package that includes a guaranteed pay rate for when drivers have an assigned passenger, and some alternative health, disability, and non-discrimination guarantees. A Morgan Stanley analyst estimated this will raise Uber’s labor costs by about 5%.

Yet the initiative doesn’t include an enforcement mechanism for regulators or individual drivers to go after companies that shirk their obligations, legal experts said.

“Prop 22 creates these rights, but as slender and grossly insufficient as they may be, there’s real questions whether workers can access them,” said Terri Gerstein, director of the State and Local Enforcement Project at Harvard University’s Labor and Worklife Program.

The ballot measure reflects the argument Uber and Lyft have advanced in court for years that California’s labor laws are outdated and don’t apply to digital platforms that connect drivers and riders. In a role reversal, Proposition 22 requires state officials to defend the measure against any legal challenges. If they don’t, the state must pay independent lawyers to fight for it.

Some legal experts are concerned the initiative may serve as a model for other companies looking for a way out of paying for employee benefits, which in turn threatens to starve the public treasury of payroll and income tax revenue. The Tax Policy Institute estimates worker misclassification costs California $7 billion in annual revenue.

Gould, the professor, described Tuesday’s vote as a paradox for California’s proposition system, an exercise in direct democracy devised more than a century ago at a time when the state legislature was unconcerned with the plight of the “little guy.”

“This has turned the proposition system on its head,” Gould said. “These companies are the new robber barons, and they’re using the system to establish a privilege status for themselves.”

(Updates with outlook for policy changes in other states in seventh paragraph.)