A couple celebrates Thanksgiving with friends by having dinner together over a Zoom video call on November 22, 2020 in New York City.
Photo by Scott Heins/Getty Images

Strains on the U.S. supply chain, including a shortage of workers, means American Thanksgiving gatherings could have to skimp on classics like stuffing. 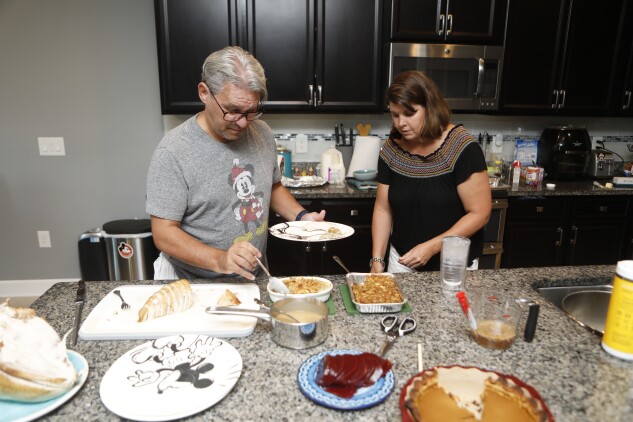 Jennifer and her husband Steve Collis make Thanksgiving dinner while talking with family in Delaware and Ohio on a ZOOM call on November 26, 2020 in Valrico, Florida.
Octavio Jones/Getty Images

Growing supply chain disruptions are forcing Americans to take a deeper look at the nuanced route their meals travel to get to their plates. The food industry, experiencing the same shortage of workers as the broader economy, is grappling with a shortfall in truck drivers, bakers, and supermarket employees. Backlogged ports and transportation routes have also exacerbated shipping delays.

The Biden administration has taken a series of steps to alleviate the supply chain congestion, such as providing funding to international partners to simplify customs and clearance procedures, and facilitating 24/7 operations at two southern California ports.

Several trade groups called for Congress to address the problems by enacting a measure () that would tackle maritime transportation issues. Reps. (D-Calif.) and (R-S.D.), who introduced the bill, call it the first major update of federal regulations for the international ocean shipping industry in over two decades.

Trade groups are also calling for federal policies to help with the worker shortage.

Ferrara, Cinco, and Jon Samson of the American Trucking Associations all said the forthcoming federal Covid-19 vaccine mandate for employers — which hasn’t taken effect yet — is scaring away workers.

The baking sector’s aging workforce is clocking out for good, Cinco, who works at Schwebel Baking Co., said. High levels of turnover at his company are caused by “a need to run 24/7,” he said.

Grocers and wholesalers are also struggling to fill jobs, with remaining employees described as “mentally and physically exhausted” by Ferrara. Supermarkets have adjusted with shorter hours and boosted wages.

One silver lining: Because much of U.S. food is grown domestically, bottlenecks at the ports have largely spared consumers’ grocery lists, he said.

Ferrara warned American consumers against panic buying, which he called the “greatest risk to the availability of food” — even more so than the current supply chain issues.