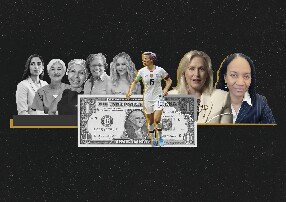 The U.S. Soccer Federation and members of the women’s national team renewed their equal pay fight in federal court in Los Angeles, with the federation saying the players didn’t even try to prove that they’re paid less than the men’s team. The players counter that U.S. soccer continues to pursue a “total remuneration” argument that has already been rejected by the court.

Both sides are seeking pretrial wins on liability issues in the closely watched equal pay class lawsuit that the players filed against U.S. Soccer in March 2019 in the U.S. District Court for the Central District of California.

The federation also opposed the players’ motion seeking to exclude three expert witnesses it intends to call at trial, which is scheduled to begin May 5.

An expert witness for the players previously calculated a back pay damages award of $66,722,148, which doesn’t include any potential punitive damages.

In the latest filings, the parties oppose each other’s bids for summary judgment. U.S. Soccer argues the women’s suit improperly asks the court to wade into private collective bargaining agreements, in conflict with federal labor law. The women’s and men’s teams operate under different, separately negotiated agreements, it said.

Unionized workers may sue when their employer applies “their CBA” in a biased way, U.S. Soccer said. But the federal policy of judicial nonintervention in the collective bargaining process prevents courts from hearing disputes in which unionized workers compare themselves to employees outside their bargaining unit, the federation said in its March 9 opposition to the women’s motion for partial summary judgment.

The players also failed to support their claim under the Equal Pay Act because their motion is based on “broad comparative assertions about three aspects” of the women’s and men’s respective CBAs, and they make no attempt to actually identify players on the men’s team who make more for equal work, U.S. Soccer said. Because the case is proceeding as a collective action under the law, each of the 38 women participating in the suit must show her wages were less on average than comparable players on the men’s team, it said.

They also fail to take account of all the ways they are paid under their CBA compared to the men’s players, U.S. Soccer said.

The federation’s argument predicated on labor law is just an “attempt to invent a collective bargaining exemption” under the Equal Pay Act that doesn’t exist, the players said in their brief opposing U.S. Soccer’s motion for summary judgment. Federal regulations make clear there is no collective bargaining defense to equal pay violations, they said. Bias in a pay rate set under a CBA likewise isn’t a defense to sex discrimination claims under Title VII of the 1964 Civil Rights Act, the players said.

If the four lead plaintiffs were paid in accordance with the men’s CBA, they would have made an additional $10 million combined between 2015 and 2019, according to an expert retained by the players. Carli Lloyd, Alex Morgan, Megan Rapinoe, and Becky Sauerbrunn brought home $4.6 million between them over that time period, but if they’d been paid under the men’s team’s CBA, that figure would be more than $15 million, according to the expert.

U.S. Soccer’s justification that pay inequities between the women’s and men’s players can be explained by the different revenues their teams generate “is a pretextual sham,” the women said. It improperly includes differentials in prize money paid by the sport’s international controlling body FIFA. But payments that an employer receives from a third party aren’t job-related and therefore aren’t part of the equal pay equation, they said.

The women also take issue with the federation’s contention that the jobs of women’s and men’s players carry different responsibilities warranting different pay, and that the two teams don’t work at the same establishment, a key criteria under the Equal Pay Act.

U.S Soccer also is off-base in arguing that the work the respective teams perform doesn’t require equal skill and effort because men’s players must be stronger and faster and the women couldn’t compete with the men in an actual match, the women said. The argument is based squarely on biological sex. The law only excuses pay differences that are based on a factor other than sex, they said.

Even on its own terms, U.S. Soccer is wrong, the players say. The women’s team played a dozen games on artificial turf since 2015, a surface they claim is harder on an athlete’s joints and muscles than grass, or a grass surface temporarily laid over the turf. During the same time period, the men’s team has played only one game on artificial turf.

U.S. Soccer admitted in interrogatories that temporary grass surfaces have been installed over artificial turf at a higher rate for games played by the men’s national team, but says the grass surface installation decisions for the men’s games were in the hands of other organizations.

As for the women’s games, U.S. Soccer’s interrogatory replies stated that the organization didn’t consider installaing a grass surface to be “financially prudent,” or “necessary to attract opponents,” in at least a handful of the games cited by the women players.

The CBA agreement currently in effect for the women’s team states that the “Federation prefers to play games on natural grass.”

Another expert retained by the players opined that U.S. Soccer operated “well below” acceptable HR practices when it came to anticipating and proactively addressing bias claims.

U.S. Soccer has been hit with discrimination charges and lawsuits since 2004, but the organization’s HR department hasn’t conducted any training on the legal requirements of the Equal Pay Act or Title VII’s anti-discrimination provisions, according to the expert’s report, attached as an exhibit.

The federation hasn’t outlined practices and procedures for investigating discrimination and retaliation complaints, nor has it established compliance training programs for employees and personnel, both of which are standard practices for U.S. employers, the expert said.

Former team goalie Hope Solo filed a separate case against U.S. Soccer in the Northern District of California in August 2018, which has been halted in light of the Central District class action.