America’s meat-processing plants are starting to reopen, but not all workers are showing up. Some still fear they’ll get sick after outbreaks shut more than a dozen facilities last month. Employees are taking leave, paid and unpaid -- or just quitting.

At a USA plant in Greeley, Colorado, absenteeism is running as high as 30%. Before the pandemic, it was about 13%. The company is paying about 10% of the workforce -- people deemed vulnerable -- to stay home. Others aren’t coming in because they are sick.

But some workers are staying home because they are “scared,” according to Kim Cordova, president of United Food & Commercial Workers Local 7 union, which represents workers at the plant. She couldn’t provide specific numbers but noted on a recent visit that production speeds at the plant were “really slow” because of the labor crunch.

Meat plants have been at the nexus of coronavirus hot spots across America’s rural heartland. The disease spread through plants in March and April as companies struggled to adapt their workplaces to new rules dictated by the pandemic. As absenteeism persists, the U.S. is at risk of continued meat shortages and higher prices, even after President Donald Trump signed an executive order to keep plants running. 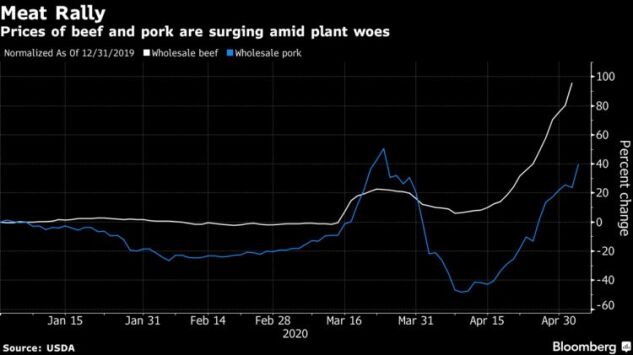 JBS is following federal “guidance around safety and social distancing, and we’re doing everything possible to provide a safe working environment for our team members who have been eager to get back to work,” the company said in an emailed statement to Bloomberg.

At the Colorado plant, JBS says it has given out masks and face shields and put up plexiglass barriers to separate people. 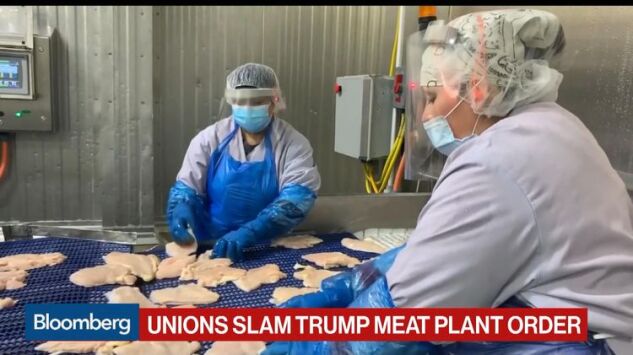 “If they don’t mitigate, we’re going to continue the cycle of workers dying and workers getting sick,” she said.

The company has had more success at its plant in Souderton, Pennsylvania, which also reopened recently and is running “beyond expectations,” JBS said.

Conditions at U.S. meat plants contributed to increased risk of infections, and ultimately more than 4,900 workers fell ill, according to the Centers for Disease Control and Prevention. The agency cited difficulty maintaining social distancing and adhering to the heightened cleaning and disinfection guidance among the factors that increased risks for workers. There were 20 deaths among employees as the virus spread to 115 meat plants across 19 states, data through late April showed.

Shutdowns at the massive plants have created bottlenecks in supply, which could continue amid absenteeism. Giant producers have such a stranglehold on output that it leaves few remedies when even a handful of facilities slow, leaving farmers with decreased options for selling their animals.

Even as U.S. pork processing picks up in the coming weeks, hog producers may be forced to euthanize as many as 7 million pigs in the second quarter, Will Sawyer, lead economist at , said in a report Tuesday. Meat supplies for retail grocery stores could shrink almost 30% by Memorial Day, leading to retail pork and beef price inflation as high as 20% relative to prices last year, he estimates.

Unions say many workers fear that new measures companies have put in place, including temperature scanners and face masks, aren’t enough to guarantee their safety as operations resume weeks or in some cases just days after a plant has idled.

“There’s a number of folks who have quit -- and there may be others who decide not to go back,” said Kooper Caraway, president of Sioux Falls AFL-CIO, which represents 3,700 workers at ’s South Dakota pork plant.

Smithfield’s South Dakota operation was among the first major facilities to shutter. The plant accounts for about 5% of the nation’s pork supply, and Chief Executive Officer Ken Sullivan rang the alarm over meat shortages as he announced plans to close on April 12. His warnings have proved prescient, with grocers from Kroger Co. to Costco Wholesale Corp. limiting shoppers’ purchases after plants were idled on virus outbreaks.

“The company and the government need to take this time to be easing anxiety, and make sure people don’t feel like they’re going back to the same unsafe plant they left two weeks ago,” Caraway said, adding that facility is doing a gradual reopen in two departments with about 250 people.

Smithfield declined to comment on worker absenteeism and operations at Sioux Falls.

South Dakota Governor said Tuesday the Sioux Falls plant would likely reopen this week. About 1,500 workers came in for the first day of free testing, with about 10% of them showing symptoms of coronavirus, she said, adding that test results were expected within 48 hours. The plant has about 3,700 employees, and testing will continue for the next several days.

The problems aren’t limited to the U.S.

In Canada, Cargill Inc.’s High River plant in Alberta is crawling back to life, but the plant, which accounts for 40% of the country’s beef processing capacity, is having trouble attracting workers.

Early Monday morning, buses retrofitted with protective barriers rolled through the gates, ferrying in laborers so they could resume processing cattle after a two-week hiatus. But after coronavirus infected nearly half of the 2,000 employees, in one of the largest workplace outbreaks in North America, some buses were empty and one carried a single passenger.

In total, union officials estimate only a third of the 300 workers Cargill anticipated showed up.

“Ultimately, they aren’t going to be able to do what they want to do at all unless there’s people there to do it,” said Michael Hughes, spokesman for United Food & Commercial Workers Local 401 union that represents workers at the High River plant.

The union has sought a stop-work order and filed an unfair labor practice complaint to try and stop Cargill from reopening and advised High River employees that they have the right to refuse to perform dangerous work. Though the union is not in a legal position to strike, it is considering other options with its legal team until the company and authorities can assure workers that the facility is 100% safe, Hughes said.

“What we’re going to see is absenteeism across North America as an expression of people putting their lives and health and safety first,” he said.

To contact the reporters on this story:
in Winnipeg at jskerritt1@bloomberg.net;
in Chicago at lmulvany2@bloomberg.net