It took just one month for the labor market in the world’s largest economy to capsize. It will take longer for the damage to be fully realized.

In the harshest downturn for American workers in history, employers cut an unprecedented 20.5 million jobs in April, tripling the unemployment rate to 14.7%, the highest since the Great Depression era of the 1930s. And it’s only set to worsen in May, as cuts spread further into white-collar work.

“It’s devastating,” said , head of monetary policy research at Moody’s Analytics. “There’s someone behind each of these numbers. It’s going to take years to recover from this. There’s a case to be made that a lot of these are temporary layoffs, so hopefully people can return to work quickly as we begin to reopen the economy -- but there’s no guarantee in that.”

The coronavirus pandemic brought the U.S. economy to a standstill after a record-long expansion, with April’s losses erasing roughly all of the jobs added over the past decade. It also laid bare just how precarious employment is for vast swaths of Americans, with an outsize impact on lower-paid workers as well as women and minorities. 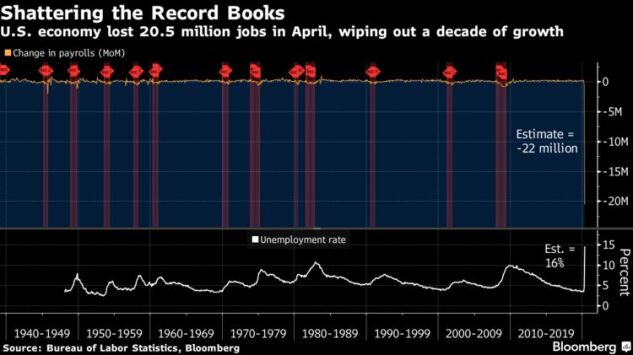 With a steep underway, the destruction of jobs heaps on President Donald Trump to restart the economy and show results by November. But with little containment of a contagious disease that’s killed 75,000 Americans and counting, business is returning unevenly and slowly if at all, and signs are mounting that many employers will be forced to make the cuts permanent.

The pandemic’s initial tremors hit those least able to absorb the blow, with April’s job losses concentrated in lower-wage labor, from hospitality to retail and restaurants.

In May, layoffs will extend further into white-collar positions, according to of Oxford Economics.

The April report “really reflects the first-round effect of the Covid-19 crisis, so all these industries that are really on the front line were directly hit by the lockdowns and fear,” she said. In May, the job losses will likely be in the “second-round” of companies including more professional positions, corporate offices, and higher-earners, she said.

With stimulus checks from the U.S. government making up a smaller share of income for such people, the deepening employment hole could fan calls for a fourth round of fiscal aid from Congress -- on top of trillions of dollars already dispatched. The Federal Reserve is likely to keep pumping money into the economy while leaving near zero for an extended period. 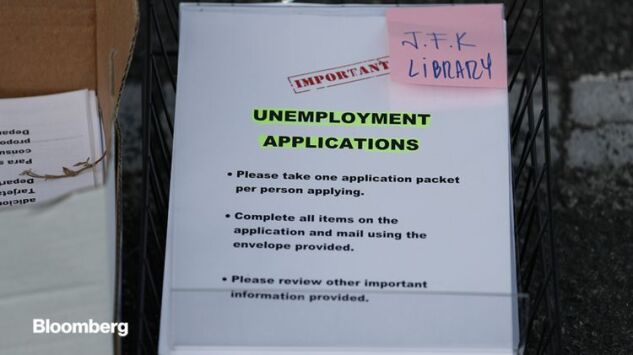 WATCH: U.S. payrolls fell by 20.5 million in April, while the unemployment rate more than tripled to 14.7%.
Daybreak: Americas.” (Source: Bloomberg)

There’s also risk in coming months that a recession will morph into a deeper depression, or a prolonged and sustained downturn -- if a second wave of infections closes down business again after some states reopen. That’s becoming more and more likely, according to Moody’s Analytics, which projects a peak unemployment rate in May of about 17%.

Stock investors have largely looked past the dire economic news, with equities rallying since late March. The S&P 500 was higher on Friday and on track for a 3% weekly gain, while the yield on benchmark 10-year Treasuries rose and the Bloomberg dollar index pared its decline.

“The extent of job losses is consistent with Bloomberg Economics’ modeling of a near 40% contraction in real GDP for the quarter. While layoffs were concentrated in sectors such as restaurants, hospitality and leisure, losses occurred in nearly all subcategories. The breadth of job losses is a jarring signal of the massive challenge of restarting vast swaths of the economy -- not just a few sectors -- and it therefore serves as a stark indication that a ‘V-shaped’ recovery will not be possible.”

A clearer measure of job realities on the ground -- the so-called underemployment rate, which includes discouraged workers and those working part-time who want full hours -- rose to nearly 23%, implying nearly a quarter of Americans experienced a job hit.

One particular group of lower-paid workers -- leisure and hospitality employees, such as those in restaurants and hotels -- declined by 7.65 million, almost half of total employment in the sector.

The Labor Department said the unadjusted unemployment rate in April would have been almost 5 percentage points higher if unemployed workers had properly classified themselves, rather than marking down that they were employed but absent from work. Furloughed workers accounted for about 4 out of every 5 unemployed Americans.

The data showed average hourly rose a massive 4.7% from the prior month and 7.9% from a year earlier -- more than double March’s pace -- but those figures were skewed higher by the disproportionate loss of low-wage workers from payrolls, rather than any wage pressures boosting employee pay.

Almost every industry was hit hard. Manufacturers cut 1.33 million positions and retailers 2.1 million. Even fell by 1.44 million as non-Covid visits and elective procedures dried up or offices closed. 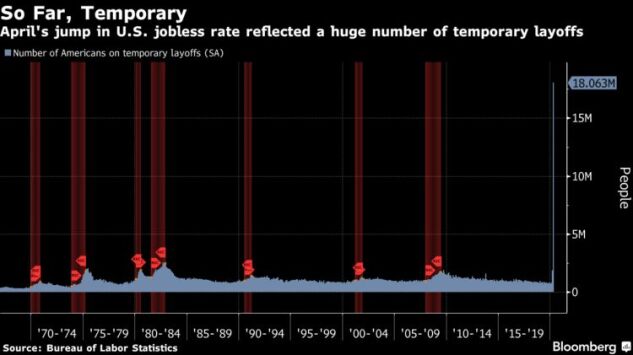 Trump -- who’s polling behind the presumptive Democratic nominee, former Vice President Joe Biden -- said Friday that the massive U.S. job losses from the coronavirus outbreak aren’t a surprise and that he shouldn’t be blamed for it.

While the pandemic has crushed economies around the world, job losses hurt more in the U.S. than in most other developed nations. That’s because about 160 million Americans get health insurance through employers and without jobs, they could face steep monthly premiums or lose coverage entirely -- which may exacerbate the economic and health impact of Covid-19.

The crisis hit harder for demographics including women and minorities, after they had benefited from the previous tightening of the labor market. 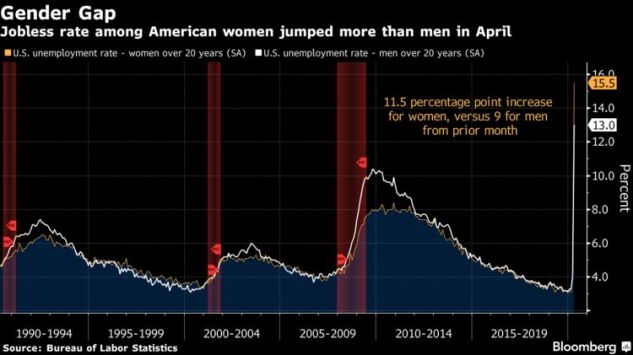 How fast hiring resumes is critical to the strength of the overall recovery. Already, Uber Technologies Inc., Boeing Co. and U.S. Steel Corp. have announced sweeping layoffs, a sign companies are banking on a slow resumption of growth.

The resulting job insecurity will undoubtedly merge with health concerns to restrain consumer demand, no matter how soon businesses restart.

Economists expect it to take time for employment to recover, even if the pandemic eases. Policy makers are also advising caution: San Francisco Fed President told on Thursday: “No one who I talk to is looking at a V-shaped recovery -- they really think this will be gradual and it will take time to build confidence back up for both workers and consumers.”