The tidal waves of unemployment filings across the U.S. showed only the barest signs of abating last week as more than 4 million people applied for benefits, bringing the five-week total during the coronavirus pandemic to 26.5 million.

Most states continued to see initial claims decline on an unadjusted basis, and several states did report decreases in layoffs for the prior week -- both signs that job losses are indeed slowing a bit. And government aid to small businesses could spur some employers to restore jobs in coming months.

But filings might continue at an extraordinary pace for several more weeks, boosting an unemployment rate that may already be around 20%. 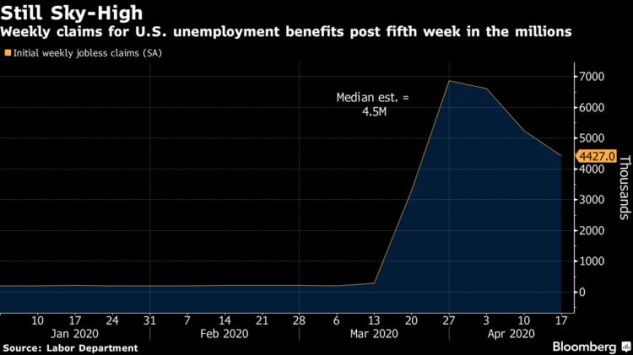 While most of the layoffs in sectors like retail have likely already occurred, there will be “collateral damage” as companies faced with weak demand dismiss workers, said , acting chief economist at Wells Fargo & Co.

Bryson said he believes the U.S. is past the peak in initial claims “for the foreseeable future,” but “if we open up too soon and this coronavirus comes roaring back then we may in fact see those sorts of numbers again.”

It’s still unclear to what extent the most recent claims totals reflect millions of people still losing their jobs each week or whether it’s largely a reflection of jobless Americans who are just now able to get through jammed websites and phone lines after weeks of trying.

States are racing to boost the capacity to computer systems built years ago, adding workers to handle unprecedented volumes of claims and trying to get the $600 in additional weekly aid to the unemployed. 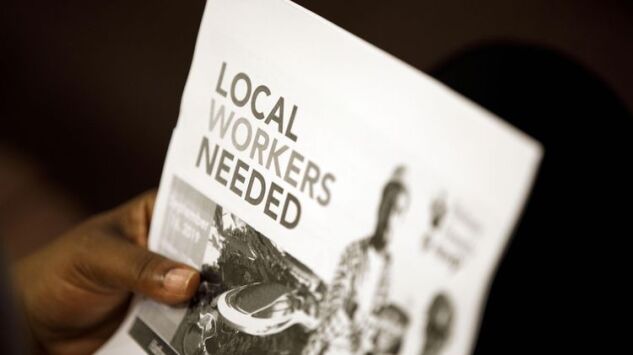 Some states have taken steps such as staggering applications by alphabetical order of last name or the last digit of one’s social security number on certain days of the week in order to manage the flow.

Initial jobless of 4.43 million in the week ended April 18 followed a slightly downwardly revised 5.24 million in the prior week, according to Labor Department figures Thursday. The median of economists was for 4.5 million claims.

California reported the most initial claims last week, at an unadjusted 533,600, down from 655,500 the prior week. Florida was next, followed by Texas at 280,400, up slightly from the prior week. Georgia and New York also reported more than 200,000 filings, though both down from the previous week.

Unadjusted claims in Florida more than doubled from the prior week to an estimated 505,000. Connecticut and West Virginia also posted sharp increases.

U.S. rose after the report, while 10-year Treasury yields were little changed.

The latest initial claims represent the “third consecutive weekly drop from a peak of nearly 6.9 million at the end of March. While this is an important turning point, the flood of claims will likely continue.”

for the full reaction note.

Assuming all who filed for benefits are counted as unemployed, the latest figures suggest a potential April unemployment rate of around 20%, given that Thursday’s data reflect the reference week for the monthly jobs report. That’s double the 10% peak reached in the wake of the last recession in 2009 and approaching levels last seen during the Great Depression.

, or the total number of Americans receiving unemployment benefits, rose by 4.1 million to an all-time high of 16 million in the week ended April 11. That pushed the to 11% -- the highest on record. Those figures are reported with a one-week lag.

The massive government stimulus package provides an extra $600 per week in unemployment benefits and expanded coverage to self-employed and other “gig” workers, presenting additional challenges for the states. Providing the additional aid has been wrought with technical issues and increased the number of applications flowing in.

In New Jersey, where more than 500,000 are collecting unemployment and receiving the weekly supplemental pandemic payment, promised aid to self-employed or independent workers hasn’t arrived, according to Angela Delli Santi, a labor spokesperson.

“We anticipate having it up and running shortly,” Delli Santi said of the aid for self-employed people. “States had little lead time to get these programs up and running.” 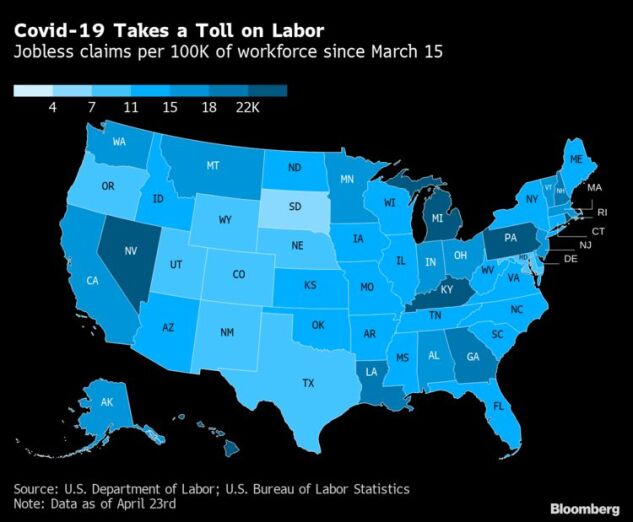 In Michigan, one of the hardest-hit states, the state labor department has 600 people answering phones and communicating with people who apply for benefits using the Internet, compared with a normal agency staff of about 130, spokesperson Jason Moon said.

Illinois Governor said Wednesday that the state has seen a vast improvement in handling millions more online filings and calls after recent boosts in capacity. The Florida Department of Economic Opportunity has installed new servers to increase capacity, and just over the weekend, the state upgraded its system to process claims faster.

Texas, which has seen 1.6 million applications related to the pandemic, added an eighth call center and paid out $499 million in benefits in just the first two days of this week.

“We are making changes, making advances, updating our phone systems and our web systems, adding more staff, adding call centers to meet the demand of people who are filing for unemployment insurance,” said Cisco Gamez, a spokesman for the Texas Workforce Commission.