The activists want 10 major , shareholders, such as investment managers The Vanguard Group Inc., and , to demand stronger safeguards for the meatpacker’s laborers.

“These high rates of COVID-19 infection are just one symptom of the exploitation that Tyson workers have faced for too long,” Navina Khanna, executive director of the HEAL Food Alliance, a coalition that signed the letter to investors, said Monday. “Right now, only a handful of companies control a majority of the market, and they are literally writing the rules around worker protections.”

Tyson, in response, said it’s stepped up testing of its workers and carries out other protective measures. Representatives of Vanguard and BlackRock didn’t immediately respond to requests for comment.

The food supply chain took a serious blow as restaurants and schools shuttered nationwide to slow the spread of the virus. However, the most critical disruption came later when meat-processing plants turned into Covid-19 hot spots, and halted operations to manage outbreaks. President directed meatpackers to resume in late April with a controversial executive order that invoked the Defense Production Act. 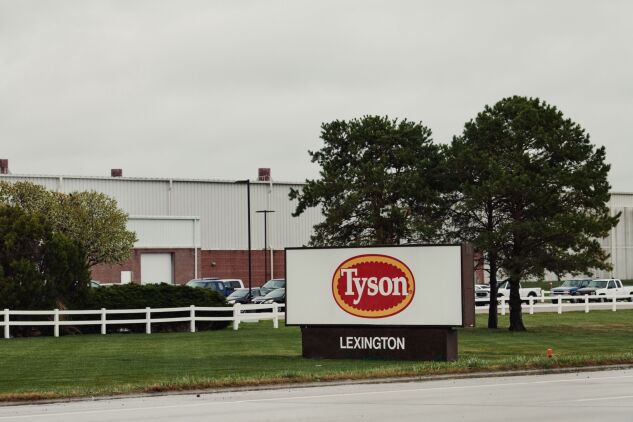 The advocates’ call to action comes on the day the House Agriculture Appropriations Subcommittee plans to consider its draft funding bill for fiscal 2021. The Democratic-led legislation includes a provision to revoke line-speed waivers for meat and poultry processors during the Covid-19 outbreak and to prohibit granting new waivers.

Activist groups called Tyson “one of the weakest links” in the nation’s food system. Coronavirus outbreaks caused the deaths of more than 25 Tyson employees, along with the infection of more than 8,500 others, which is “more than double that of any other meatpacker,” their letter said.

“Through its failure to adequately protect its workers, Tyson has sent the message that the lives of its workers—who are mostly people of color and immigrants—do not matter to them,” the organizations said.

Safety measures that advocates say could better serve laborers include paid quarantine leave for infected employees, daily testing and personal protective equipment for workers, public disclosure of all Covid-19 cases, and a cutback on line speeds.

Tyson spokesman Derek Burleson responded that “we’re the only meat-processing company in many of the states we operate to conduct voluntary, large-scale testing of its employees, many of whom do not show any symptoms and otherwise would not have been identified.”

The corporation now screens team members for symptoms before every shift, requires protective face masks, and has designated social distance monitors to ensure protocols are followed, Burleson added Monday in a statement.

He pointed to a recent review by the League of United Latin American Citizens, a civil rights organization, that found Tyson has “made significant strides” in fighting the coronavirus.

“There is more to this than a concern for your right to an uninterrupted supply of chicken tenders, bacon, and T-bone steaks,” said Magaly Licolli, co-founder of Venceremos, a worker-based grassroots advocacy group that joined in signing the letter Monday.

Food workers on the front lines of the pandemic have “always been essential,” she added in a statement. “If they don’t survive, we won’t survive.”