Chad Wolf’s formal nomination as Homeland Security Secretary, which would help cement his work so far at the agency, is likely to face a chilly reception from Senate Democrats.

“Given his past actions, he’d be an awful choice,” Senate Minority Leader (D-N.Y.) tweeted in response to Wolf’s nomination.

Senate confirmation would eliminate criticism stemming from a recent determination that Wolf has been serving illegally in the acting role, and could help ward against legal challenges to policy changes made under his leadership. Democrats have denounced Wolf for ending asylum during the coronavirus pandemic, and for deploying federal law enforcement to American cities, among other policies.

Wolf’s legitimacy in the acting role has been under fire since the Government Accountability Office determined earlier this month that the incorrect official—Kevin McAleenan—assumed the title of Acting DHS Secretary when the last U.S. Senate-confirmed secretary——resigned in April 2019. There has not been a Senate-confirmed head of DHS for more than 500 days.

At that time, subsequent amendments to the order of succession made for McAleenan were invalid, including those for Wolf and acting deputy Ken Cuccinelli, according to the Aug. 14 decision issued by GAO General Counsel Thomas Armstrong. 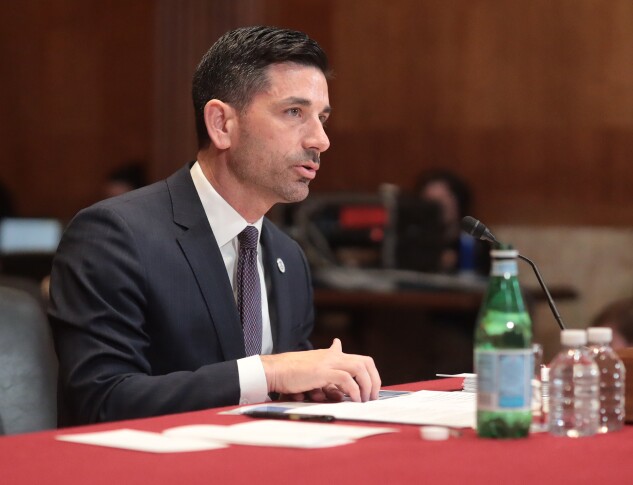 “Given Acting Secretary Wolf’s record since assuming his role, I have serious questions and concerns about his suitability for the job,” said Senate Homeland Security and Governmental Affairs ranking member (D-Mich.).

While Wolf hasn’t been a sole signatory on many rules or policies during his time as the head of the agency, some of his changes could have a wide impact, including those related to the Deferred Action for Childhood Arrivals program, the time it takes asylum seekers to obtain work authorization, and visa fee increases scheduled to take effect in October.

Lawsuits over these policies, such as Casa de Maryland v. Wolf, Battala Vidal v. Nielsen, and Immigrant Legal Resource Center et al v. Wolf, have specifically cited Wolf’s alleged unlawful appointment as a basis for their arguments that the changes should be voided, and federal judges have seemed open to those arguments.

Judge of the U.S. District Court for the District of Maryland in the Casa v. Wolf case said during an Aug. 14 hearing that even though the GAO decision isn’t binding, it was “tracking quite closely” to what she was thinking about the issue.

Judge of the U.S. District Court for the Eastern District of New York expressed concern in an Aug. 20 status conference for the Battala Vidal v. Nielsen case over changes to the DACA program, stating that there has been “a rather extraordinary hurry on the part of the acting secretary to impose a new set of interim steps from the July 28 memo, which are now the subject of a question as to his authority to impose those steps.”

Wolf can continue to serve as acting while his nomination is pending the Senate because of the Homeland Security Act, according to Stephen Vladeck, University of Texas at Austin professor and a senior editor of the Lawfare blog.

If Wolf were acting under the Federal Vacancies Reform Act he would be barred from serving as acting secretary once Trump sends a formal nomination to the Senate. But Wolf is instead acting under the Homeland Security statute, the administration argued in response to the GAO report.

The Senate is in recess until September. It is up to the Senate, not the House, to confirm Wolf.