Federal agencies that put President planned regulatory agenda on the back burner this spring to respond to the coronavirus pandemic are catching up now, as well as determining which of their virus-related changes to keep.

The year had been shaping up to be Trump’s most regulatory yet, even when accounting for rollbacks of major Obama-era water and auto emissions rules, according to researchers who analyzed federal agencies’ 2020 rulemaking agendas published last fall. The White House has reviewed 75 significant final rules since the start of the year.

Proposals now under review by the White House Office of Management and Budget include a Department of Homeland Security rule to prevent the spouses of highly skilled foreign workers from receiving employment authorization, an Environmental Protection Agency rule to revise air quality standards, and a Health and Human Services rule to update the definition of “healthy” foods.

But the trend toward greater regulation that began in 2019 won’t be fully understood until OMB’s Office of Information and Regulatory Affairs releases the spring 2020 unified regulatory agenda that was delayed because of the pandemic. The unified agenda is a semiannual report of all rules agencies plan to address over the next 12 months. In five of the last six years, the spring agenda was released in May. Timing for release of the spring 2020 installment hasn’t been finalized, according to OMB.

“I expect a true midyear update, with a fuller launch projecting well out into the future this fall,” said Anthony Campau, director of government regulation at Clark Hill PLC and former chief of staff to Trump’s first regulatory chief.

There’s now a lot of energy across the government on implementing Executive Order 13924, which requires agencies to consider making permanent recent pandemic-related regulatory actions, as well as on other actions put on hold during the emergency, said Campau, who’s also a visiting fellow at the Heritage Foundation.

Roughly 600 temporary deregulatory or administrative actions have been taken during the pandemic, acting OMB Director Russell Vought said at his June 2 nomination hearing before the Senate Homeland Security and Governmental Affairs Committee.

Agencies have until June 23 to report on final rules, waivers, or other regulatory actions they intend to issue in the next six months to promote economic recovery, under a recent guidance memorandum Vought issued. Agencies also were directed to list the temporary regulatory actions taken in response to the pandemic, along with an analysis of whether the action should be made permanent.

The Regulatory Flexibility Act requires agencies to publish their significant rules in the Federal Register each April and October, and the unified regulatory agenda for many years adhered to the same timeline. But the timing has since slipped; there was no agenda, for instance, in the spring of 2012. 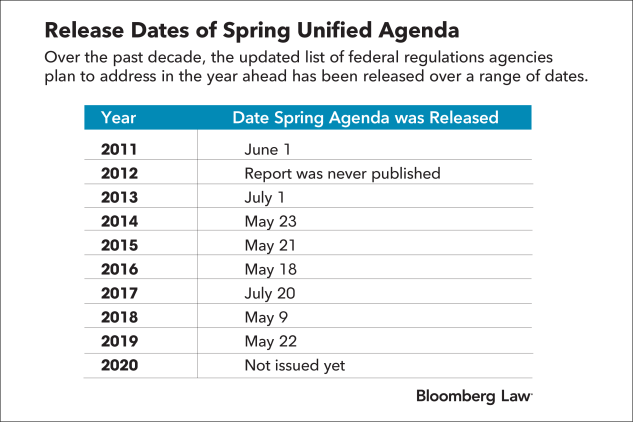 Each agenda runs hundreds of pages and data can be broken down several ways, leaving plenty of room for the Trump administration to say it’s deregulating.

“President Trump has led the most productive and historic deregulation effort in modern history—removing government barriers that hinder both job creation and civil liberties,” OMB spokesman Chase Jennings said in an email to Bloomberg Law.

The administration continues to accomplish its goal of removing two regulations for every new one created, Jennings said, pointing to an average of seven rules cut for every new one since Trump took office. “The amount of regulatory burden being removed is at an all-time high,” he said.

Yet how much deregulating is actually being done comes down to definitions, specifically whether the calculation includes all rule cuts no matter how small, or “significant” rule cuts only. A significant cut usually is defined as having an economic impact of $100 million or more annually.

The Trump administration was the first to designate rules as either regulatory or deregulatory to comply with Executive Order 13771, which requires agencies to cut two existing rules for every new one issued. But the way compliance is calculated virtually guarantees success because it includes all minor cuts to existing rules while excluding from the order’s requirements the majority of new rules issued.

“I think for their purposes they’ll say that they’re on track,” said Dan Bosch, director of regulatory policy at the American Action Forum, a right-leaning economic policy think tank. “I would be surprised, though, if they are able to get the two-to-one ratio” when it comes to comparing significant regulation to significant deregulation, he said.

Agencies already have put out their major deregulatory actions for 2020, a process that likely was timed to avoid rules being overturned through the Congressional Review Act next year if Democrats win the White House and full control of Congress in the November elections, Bosch said.

“It does seem like the Trump administration has to some extent run out of the low-hanging fruit,” said James Broughel, senior research fellow at the Mercatus Center at George Mason University. “In the early years, they were emphasizing deregulating more than regulating, and that has slowly started to reverse a little bit.”

A report released by the Competitive Enterprise Institute, a libertarian public policy organization, is the latest to show the administration has been moving to regulate more—not less—over the successive years Trump has been in office.

That analysis supports the conclusions of a report last year by the George Washington University Regulatory Studies Center showing more planned regulatory actions than deregulatory ones, along with a review of regulatory cost increases in 2019 by the American Action Forum.

CEI’s report shows that the Trump administration started an aggressive deregulation campaign in 2017 by freezing pending rules, using the Congressional Review Act to cut Obama-era regulations, and slowing the pace of new rulemakings. Yet 2019 told a different story.

According to the fall 2019 unified agenda, agencies had 3,752 regulatory actions at various stages of implementation, CEI’s report said. Of those, just 689 were designated as deregulatory.

“While the Trump administration can be said to have technically met the goal of implementing a ‘one-in, two-out’ process for federal regulations over the past three years taken as a whole, the longer-term horizon plainly shows agencies poised to reverse this and to issue substantially more regulatory actions than deregulatory ones,” the report said.

In terms of savings, EPA’s Safer Affordable Fuel-Efficient Vehicles rule alone is estimated to save $200 billion through reduced regulatory costs and less expensive vehicles for consumers, making it “the biggest deregulatory action of our lifetime,” OMB’s Jennings said.

“Anyone suggesting that President Trump has slowed in his deregulation effort has been asleep at the wheel,” Jennings said.