Trump at the White House Coronavirus briefing on May 11, 2020.
Photographer: Stefani Reynolds/CNP/Bloomberg

President announced he would halt the issuance of green cards for two months -- stopping short of a sweeping immigration ban that included temporary foreign workers -- but hinted at the possibility of additional restrictions that could complicate planning for businesses and workers looking to rebound from the coronavirus.

Trump’s decision will affect thousands of would-be immigrants seeking to move permanently to the U.S., and further delays a green card process that is notoriously cumbersome for those seeking to remain in the country.

But the limited scope and time frame seemed designed to reassure businesses, farmers, and workers across the country worried that dramatic changes to immigration laws could upend already fragile plans to return as coronavirus social distancing restrictions are gradually lifted. Temporary workers who represent the country’s biggest source of immigration will not be affected.

Still, the president’s comments that he was considering a second, more restrictive executive order further reducing immigration, as well as additional extensions of the ban on permanent residency visas were likely to undercut that effort.

Companies may prove less likely to seek out and hire foreign workers -- or proceed with projects dependent on non-American labor -- if they fear their plans may be thwarted by new restrictions from the White House.

“It would be wrong and unjust for Americans laid off by the virus to be replaced by new immigrant labor flown in from abroad,” Trump said at a White House briefing on Tuesday evening. “We must first take care of the American worker.”

In a Wednesday morning, Trump said he’d sign the executive order later that day, describing it as a measure “prohibiting immigration into our Country,” without alluding to its exemptions. 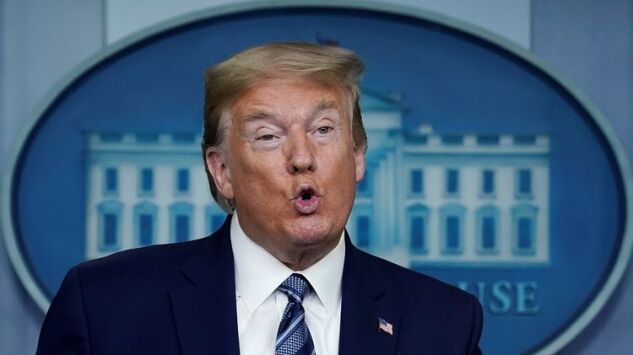 Watch: Trump says he would suspend legal immigration to the U.S. for at least two months to help Americans who have been put out of work.
(Source: APTN/Bloomberg)

Trump said his executive order -- announced in a tweet late Monday night, to the surprise of even some aides -- was still being drafted, but would only be in effect for 60 days and apply to individuals seeking green cards. He said that “certain exemptions” would be allowed in the executive order, which he said would be signed, “most likely” by Wednesday.

The president also said that there would be specific provisions exempting agricultural work, and that his administration would make it even easier for farms to hire migrant workers.

“The farmers will not be affected by this at all,” Trump said.

An early draft of the executive order obtained by Bloomberg included exceptions for people seeking jobs in “food production and directly helping to protect the supply chain,” which could apply to farm workers. The ban would also not apply to health care or medical research professionals, according to the draft.

Technology industry workers living in the U.S. on H-1B visas, however, would have to provide updated certifications to the government that they are not displacing American workers. Refugees and asylum seekers would not be affected by the order, or would spouses and children of U.S. citizens or permanent residents.

But Trump hinted that additional restrictions could be on the horizon, particularly if the economy struggles to bounce back from the prolonged coronavirus shutdown.

“We have a secondary order that, if I want to do that, we’ll make that determination,” Trump said.

And the president said he could extend the green card ban if the economy hadn’t sufficiently improved within two months.

The early draft had envisioned a 90-day restriction and framed immigration curbs as crucial to the Trump administration’s effort to revive the economy by protecting what it calls “the marginal worker.”

“I have determined that we cannot jump start the domestic economy if Americans are forced to compete against an artificially enlarged labor pool caused by the introduction of foreign workers,” Trump said in the draft. “I have determined that the entry of most aliens as permanent or temporary workers in the immediate term would have adverse impacts on the national interest.”

The White House declined to comment on the draft document. 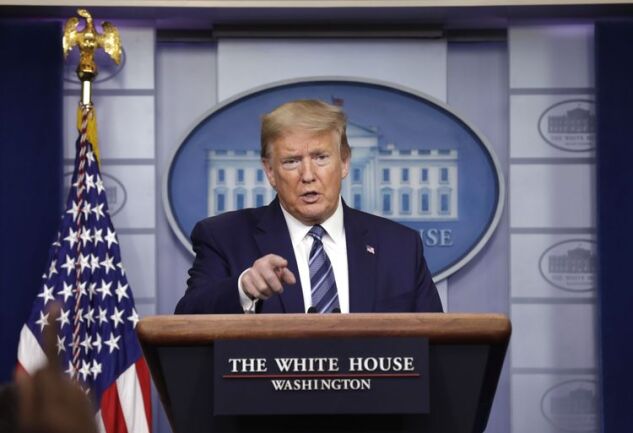 The immediate practical effect of the order remains unclear. Immigration agencies and embassies have largely stopped processing visas, meaning many of those seeking to immigrate to or visit the U.S. cannot do so.

Refugee admissions have been suspended since March 19 after the United Nations and International Organizations for Migration temporarily halted refugee travel. The U.S. suspension has been extended to May 15.

The White House asked the Department of Homeland Security to begin working on a ban last week, but Trump’s tweet Monday caught immigration officials off guard, according to a person close to the administration, who discussed the matter on condition of anonymity.

Early Republican reaction was mixed, and carve-outs were already emerging.

Trump’s announcement came as he looks to contain the health, economic and political fallout from the coronavirus pandemic that has killed more than 42,000 Americans in an election year, while shuttering the economy whose strength had been the base of his campaign only two months ago. Trump has cited the virus as evidence to stay the course on his agenda, by further restricting U.S. borders and pushing to manufacture more goods domestically.

He tweeted that he made the decision “in light of the attack from the Invisible Enemy, as well as the need to protect the jobs of our GREAT American Citizens.”

The majority opinion written by Chief Justice pointed to a federal immigration law that allows the president suspend entry of “all aliens or any class of aliens” if the chief executive finds that their arrival would be “detrimental to the interests of the United States.”

That provision “exudes deference to the president in every clause,” Roberts wrote for the five Republican-appointed justices in the majority. Roberts dismissed contentions that Trump hadn’t justified his travel ban, saying those arguments depended on the “questionable” premise that the law requires the president to provide a detailed explanation.

Cracking down on illegal immigration and a promise to erect a wall at the Mexican border formed the centerpiece of Trump’s election campaign in 2016. His Gallup approval rating slipped six points last week as scrutiny of his handling of the outbreak has intensified, and the U.S. leads the world in total reported cases.

National Security Ad visor , speaking to reporters Tuesday at the White House, called the suspension “a temporary issue” but said he didn’t know how long it would last.

Lawmakers had yet to receive any details from the administration as of midday Tuesday, one Republican official said, speaking on condition of anonymity.

Republican Senator of Iowa said he didn’t know if Trump’s pause on legal immigration makes sense. “We’ve been a welcoming nation and we need people,” he said on C-SPAN Tuesday. However, Republican Senator of Texas welcomed the decision. “I think this is a reasonable short-term measure, a reasonable emergency measure,” Cruz told Fox News on Tuesday.

It’s the latest measure taken by Trump and his administration to restrict the U.S. border amid the pandemic. He has imposed broad travel curbs on China, Europe, Canada and Mexico to contain the virus’s spread, and the State Department last month temporarily suspended routine visa services at embassies and consulates.

“No, no,” Trump said when asked if he were using the coronavirus crisis as a cover to advance his immigration agenda. “I want people that are in this country, I want our citizens to get jobs. I don’t want them to have competition. We have a very unusual situation where something came in that nobody has seen for many many decades.”

Former Vice President -- the presumptive Democratic nominee seeking to unseat Trump in November -- said that Trump was “tweeting incendiary rhetoric about immigrants in the hopes that he can distract everyone from the core truth: he’s moved too slowly to contain this virus, and we are all paying the price for it.”

Biden said in a statement Trump should be focusing “the full force of the presidency on producing and distributing the number of tests we need.”

The White House has said enough testing capacity exists for the U.S. to begin a phased reopening of the country, despite concerns raised by critics and some public health officials fearful of a second wave of the illness.