President announced four executive actions on Saturday, including a temporary payroll tax deferral for some workers and continued expanded unemployment benefits, as the coronavirus pandemic continues to hobble the U.S. economy.

The moves were criticized by Democrats and some Republicans as, variously, proving little real help, an unconstitutional power grab from Congress, and a backhanded way to defund Social Security and Medicare, critical programs for millions of American retirees.

“Unilaterally eliminating the payroll tax and ignoring Congress’s power of the purse on funding unemployment insurance will do nothing to help Americans recover,” Representative , chair of the House Financial Services Committee, said in a statement.

Trump’s actions could imperil negotiations with congressional Democrats over an additional coronavirus relief package, with the two sides trillions of dollars apart on key issues. The president, though, said he’d continue to negotiate with Democrats.

The “meager” policy announcements were “unworkable, weak and narrow,” and by pushing off payroll taxes for some, “endanger seniors’ Social Security and Medicare,” House Speaker and Senate Democratic Leader said in a joint statement. 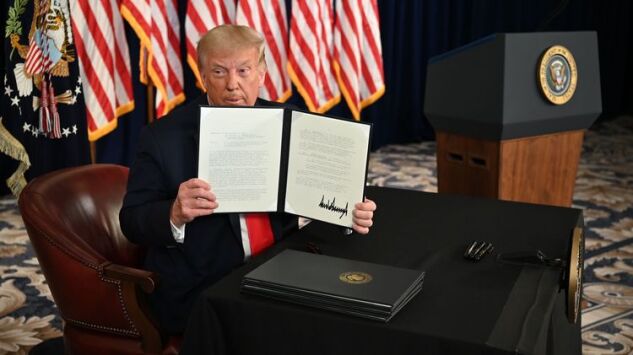 Trump said his action authorizes the U.S. Treasury to allow companies to defer -- not suspend -- payroll taxes for Americans making less than $100,000 a year from Sept. 1 through Dec. 31. He said if he’s re-elected in November, he may extend the deferral and terminate the tax for some workers.

”This fake tax cut would also be a big shock to workers who thought they were getting a tax cut when it was only a delay,” Senator , the ranking Democrat on the Senate Finance Committee, said in a statement. “These workers would be hit with much bigger payments down the road.”

“This decree is a poorly disguised first step in an effort to fully dismantle these vital programs by executive fiat,” Neal said in a statement.

The president said another move would provide $400 a week in jobless benefits -- down from $600 weekly that had been provided through last week, authorized by a Congressional stimulus bill in March -- and that states would be responsible for covering 25% of that cost.

The administration is directing states to use part of the $150 billion Coronavirus Relief Fund, while the federal government will tap on $44 billion of the existing $70 billion Disaster Relief Fund, said , an economist for Bloomberg Economics.

“Because the Trump plan taps a limited pool of existing funds to extend unemployment benefits at $400 per week, there is a high risk they run short ahead of the election,” Husby said.

Neal said the plan was cumbersome: “What the President outlines is likely legally and logistically impossible to execute in nearly every state, not to mention that the proposed funding falls far short of what would be required.’

To act on his own, the president is relying on an expansive and controversial reading of executive power that likely will face legal challenges. Trump’s advisers say executive action could pressure Democrats to reduce their demands and allow him to argue to voters that he’s looking out for their well-being amid congressional inaction.

Republican Senator of Nebraska said of Trump’s actions, “the pen-and-phone theory of executive lawmaking is unconstitutional slop,” adding that the president “does not have the power to unilaterally rewrite the payroll tax law.”

Even Senator , a close Trump ally, said in a tweet that he “would much prefer a congressional agreement.”

But the gambit risks alienating Democratic lawmakers and decreasing the odds for a deal that both sides say is necessary to help the economy recover from a pandemic that’s decimated industries and left nearly 160,000 Americans dead so far.

“Unable to deliver for the American people in a time of crisis, Donald Trump offered a series of half-baked measures today,” Democratic nominee said in a statement. “He is laying out his roadmap to cutting Social Security.”

Democrats criticized the president when he threatened the move during negotiations, saying the administration would be better off returning to the bargaining table. White House Chief of Staff and Treasury Secretary had been meeting throughout the week with Schumer and Pelosi to try to craft a deal, without success.

Of the $3.7 trillion Congress has authorized for the coronavirus response, there is still $1.5 trillion yet to be spent or committed, according to an analysis from the Committee for a Responsible Federal Budget. The White House, though, has limited authority to redirect the unused money without Congress’s approval.

Because the president can’t cut taxes on his own, Trump is simply delaying the due date for the payroll tax, which is paid jointly by employers and employees. The administration hopes employers will stop withholding the money from Americans’ paychecks, with voters in turn pressuring Congress to eventually pass legislation forgiving the accumulated amount.

But employers may decide simply to do nothing in the face of uncertainty, fearing that if Congress fails to act, they could be stuck trying to claw back money from their employees to settle their obligations to the Internal Revenue Service.

The president’s effort to unilaterally extend additional unemployment benefits to Americans after a $600 enhanced weekly benefit expired at the end of July may also face logistical challenges.

Renewing the payments has been a key sticking point in negotiations on Capitol Hill. Democrats favored extending the $600 weekly amount through January or beyond, while Republicans sought a reduction, saying that the benefit was so generous that Americans were choosing not to return to work.

“The temporary $400-a-week supplement on top of the traditional state benefits will help the unemployed, no doubt, but it means that more than half of the jobless will earn more unemployed than at work,” Representative Kevin Brady of Texas, the top House Ways and Means Committee Republican, said in a statement. “This maintains a serious barrier to reconnecting workers to their jobs.”

The administration says that about $81 billion has yet to be spent and could be provided to unemployed Americans, though some states have already committed their funds for health care, distance learning and housing assistance. And even if states do use the money for an expanded unemployment benefit, it’s unlikely to match the previous $600.

Some 10.2% of Americans are unemployed, a government report showed Friday. That’s just above the peak following the 2008 financial crisis, but a marked decline from almost 15% at the height of the pandemic.

The president’s eviction moratorium expands the congressionally approved version that expired in July.

Trump directed the Department of Housing and Urban Development to extend protection for renters in federally backed housing, mirroring the previous stimulus legislation that shielded around a third of the nation’s renters. Those who live in buildings with federally backed mortgages or loans would be shielded from eviction proceedings.

Around one in five American renters -- between 19 million and 23 million people -- are at risk of eviction by the end of September, according to an analysis by the Aspen Institute.