The United States Capitol Building reflects on a truck as the sun rises in Washington, D.C.
Photographer: Zach Gibson/Getty Images

National Labor Relations Board Chairman John Ring (R) has filed a formal complaint against his agency’s inspector general in a move critics suggest is a political calculation to oust the agency’s internal watchdog.

The account of Ring’s complaint against Inspector General David Berry was confirmed by three current and former senior agency personnel and four congressional staffers. They spoke with Bloomberg Law on condition of anonymity due to the sensitivity of the issue and because the complaint may still be pending at the Council of the Inspectors General on Integrity and Efficiency—which oversees IGs at federal agencies.

Each said they believe the chairman is partly motivated by a desire to replace Berry with a more compliant watchdog or, at least, to seriously limit his oversight of the board’s moves to deregulate business and tighten the screws on labor unions.

They said the rift between the agency head and its inspector general is related to Berry’s role in compelling Republican board members in February 2018 to withdraw what would have been among the most consequential labor policy changes for the agency during the Trump administration—a ruling to limit “joint employer” liability for affiliated businesses. Ring joined the board as chairman as that episode was ending and immediately moved to re-enact nearly the same joint employment policy that had been nixed.

Complaints against IGs to the council are infrequent, and it’s rare for one to be filed by the head of the same agency, according to a review of the council’s annual data. The labor board under President has already had to deal with the conflict-of-interest matter in 2018, including calls for Republican member William Emanuel’s resignation. Ring’s move could put the agency on the defensive again and stoke further criticism from Democratic politicians who have accused the board’s GOP members of skirting ethical obligations to establish new joint employment rules and further pursue a deregulatory agenda.

Ring’s complaint to the council generally concerns Berry’s allegedly harsh treatment of agency employees. It’s also related to one of at least two Equal Employment Opportunity complaints that have been filed against the inspector general in the past few years, according to sources familiar with the matter. Other agency staffers have also raised concerns about Berry.

There have been informal complaints about the IG’s interactions with co-workers over his nearly two decades at the agency, in part because his chief role is to investigate staffers, but also because of his personality and hard-nosed posture in the role, sources said.

Those familiar with his approach all stressed that while they can’t speak to the merits of the EEO complaints, Berry seems to take the same aggressive approach to all staffers implicated in any measure of misconduct.

Neither Ring nor Berry would respond to specific questions on the EEO accusations or other complaints. An agency spokesperson said “the Board does not comment on internal personnel matters.”

“Berry didn’t put himself in a good posture with respect to how he did his job, however, despite the things he did wrong he also did a significant number of things correctly and in an unbiased and non-partisan way,” said former NLRB Chairman Mark Pearce. “The fact that he is now subjected to these types of allegations has created a circumstance where—if we assume that the people in control want to handcuff Berry and prevent him from being involved in legitimate investigations—then they would have perfect pretext to do so,” the former Chairman said.

Pearce, a Democrat appointed by President , was re-nominated by Trump but withdrew his name from consideration in February as business lobbyists urged Senate leadership not to confirm him to another term.

The oversight authority inspectors general wield extends even to agency heads appointed by the President, including the four sitting members of the labor board. That includes discretion to make criminal referrals to the U.S. Department of Justice.

Berry came to the labor board after serving in the U.S. Marine Corps. He has a little over seven years of active duty and was previously an office misconduct attorney at the Pentagon, where he was responsible for “monitoring and advising on administrative and criminal matters” involving officers, the inspector general said in an e-mail.

A current NLRB employee told Bloomberg Law that Berry once joked to a group of agency staff he was meeting that they should not mention their last names because he had discretion to monitor their actions down to the keystroke.

Some staffers on the House labor committee who’ve worked with Berry said they always found him to be professional and thorough.

Tensions between Ring and Berry have been simmering for some time, according to Pearce and the other sources familiar with the situation.

The chairman joined the board as it was dealing with the public fallout after board member Emanuel participated in a decision where he had an apparent conflict of interest, according to the IG’s report. The ruling in the Hy-Brand case would have effectively decided a separate dispute in which Emanuel’s former law firm represented a party, the IG report said.

Emanuel was joined in the 3-2 Hy-Brand ruling by members Marvin Kaplan (R) and Philip Miscimarra (R). The decision rolled back a pro-worker policy that makes it easier to hold multiple businesses jointly liable for labor violations. Joint employer policy remains a key focus of the business lobby, and gig economy companies and franchised businesses have long petitioned the NLRB to reverse the more pro-worker standard established in 2015. Republican politicians have also called on federal agencies to roll-back Obama-era joint employment policies.

Berry began investigating Emanuel’s participation in Hy-Brand in late January 2018, after receiving an IG hotline complaint about it. He concluded in February that Emanuel “should have been recused.” The NLRB’s Designated Agency Ethics Official, Lori Ketcham, later concurred with his determination.

The findings resulted in withdrawal of the ruling—effectively scrapping the new Republican board’s most significant policy change at the time—and calls for Emanuel’s resignation from presidential candidate and U.S. Sen. (D-Mass.). 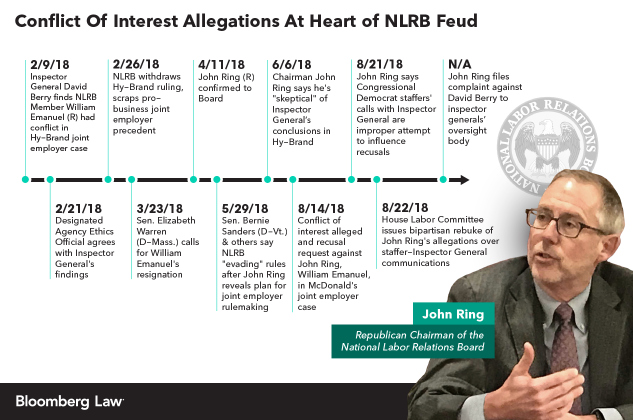 Tension Dates Back to IG’s Call on Recusal

He told lawmakers during the nomination process that he was taking the conflict problem in Hy-Brand “very seriously.”

The agency’s first news announcement after Ring was named chairman was that the board would use the federal rulemaking process to establish a new joint employer standard—as opposed to its typical process of creating policy via case decisions. Democratic presidential contenders Sens. Warren, Kirsten Gillibrand (D-N.Y.) and Bernie Sanders (I-Vt.) opposed the move. They wrote a letter to the chairman saying the rulemaking seemed like an attempt to “evade the ethical restrictions” that apply to NLRB case decisions—and which caused withdrawal of the Hy-Brand joint employer ruling.

Ring also went public with his displeasure over Berry’s approach to recusals and other ethics questions early in his tenure, saying during a June 6 conference in New York that he was “somewhat skeptical” of the IG and ethics official’s conclusions even before he was confirmed.

“They went further” than required by ethics rules “and said we’re conflating two cases,” Ring said. “There are two questions: One, can you do that? And two, once you do that do you have the authority to disqualify a member?”

“On one hand [Ring is] going after him for all this stuff internally, but at the same time he’s made it very public that he doesn’t like the things Berry’s doing that are just part and parcel of his oversight duties,” Pearce told Bloomberg Law.

Tensions between the chairman and inspector general escalated further in August 2018 when Ring made another rare public statement suggesting he lacks confidence in the IG—or at least in Berry’s understanding of his role.

That episode started after board general counsel Peter Robb (R) worked out a settlement in a major case alleging McDonald’s and its franchisees are joint employers of the workers in McDonald’s restaurants. The company has argued in the case that it lacks the degree of control over those workers to be considered their legal employer.

The proposed settlement was rejected by an agency administrative judge who said it lacked “certain fundamental elements” of an equitable settlement. The fast-food giant appealed that decision to the board members.

The petitioners in the case, backed by the Fight for $15 and Service Employees International Union, then filed a motion asking Ring and Emanuel to recuse themselves because they came to the NLRB from two law firms—Morgan Lewis and Littler Mendelson—that did work on behalf of McDonald’s in direct connection to the dispute.

The recusal issue is unresolved and has drawn the attention of Democratic members on the Senate Health, Education, Labor and Pensions Committee.

Ring sent a letter to the committee August 21, while the agency was still considering the requests. The chairman suggested that it’s inappropriate for congressional staffers on the labor committee to communicate with the IG, and accused Democratic staff of attempting to “improperly influence the outcome of the pending recusal motion.” Staffers had “reach[ed] out to the IG to discuss a pending recusal motion,” although there’s no “active IG investigation or audit,” Ring said.

The chairman’s letter received a bipartisan rebuke from lawmakers on the panel who’ve been divided along party lines on nearly every question related to labor agencies or policy in the past few Congressional terms.

It “is common practice for our staffs to be in communication with Inspectors General,” committee Chairman Senator Lamar Alexander (R-Tennessee) and ranking member Patty Murray (D-Wash) wrote back to Ring. They cited the Inspector General Act of 1978 and the Integrity Council’s policies.

Ring said last year that the board would undergo a comprehensive review to clarify when members should sit out certain cases because of conflicts. The NLRB has given few updates and little information about the status of the review.

The requests for the chairman and Emanuel’s recusal from the McDonald’s case remain pending. Ring and representatives for the Council of Inspectors General declined to respond to questions about the status of the complaint.

A majority of the board’s four sitting members—three are Republicans—would have to agree on Berry’s termination for the inspector general to be ousted. Berry remains in his post as of June 25

To contact the reporter on this story: in Washington at hkanu@bloomberglaw.com