Both items are on the administration’s new regulatory agenda for the next several months. The Labor Department plans to roll out updated overtime pay requirements (RIN:1235-AA20) by March. The DOL intends to propose a new rule (RIN:1235-AA26) on when businesses in staffing, franchise, and other arrangements share legal responsibility for any wage and hour violations by their partners as soon as December.

The National Labor Relations Board is also working on its own version of a final rule on joint employment. A proposal it released earlier this year would limit the circumstances in which affiliated companies are liable for unfair labor practices against—or required to bargain with—each other’s workers. The board said it will close the public comment period for the proposed rule in November.

The regulatory moves are likely to have a significant impact on businesses and their workers.

Joint employer questions have vexed companies like McDonald’s and Microsoft, which have faced claims that they’re on the hook for labor violations against franchisee and staffing firm workers, respectively. Obama administration moves to expand joint employment have been hailed by advocates as a way to give workers a stronger voice on the job with the company actually setting the terms of their employment.

The DOL is widely expected to take a more moderate approach than a stalled Obama era overtime rule, which was projected to make some 4 million workers newly eligible for overtime pay. Business lobbyists argued that it would have forced companies to cut jobs to cover payroll.

The Obama rule would have doubled the salary threshold—up to about $47,500 from $23,500—under which employees are automatically entitled to time-and-a-half pay for all hours worked beyond 40 in a week. The big question is where this Labor Department will set the threshold.

“It’s one of the concrete things that the president and the Labor Department can do to jump-start middle class wage growth,” an attorney with the National Employment Law Project, told Bloomberg Law of expanding overtime pay. Sonn was among a number of worker advocates who urged the Labor Department to move forward with the Obama overtime rule during a recent public listening session in Providence, R.I. 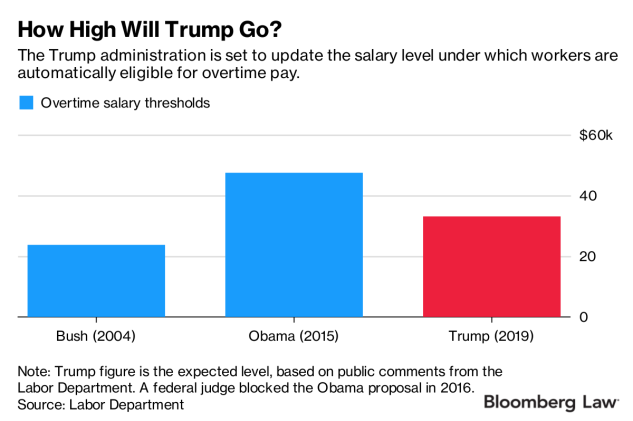 Businesses groups, led by the International Franchise Association, have been urging the Labor Department and the NLRB to limit the situations in which companies can be tagged as joint employers. They’re concerned about companies being made liable for wage and hour and other violations against other workers those businesses don’t directly control.

“The current joint employer uncertainty creates a confusing and costly legal environment for” franchise businesses, IFA spokesman Matthew Haller said after the agenda was published. “Moving toward clear, historically-understood standards will benefit these independently-owned businesses, their employees, and the American economy.”

The new rules are likely to roll back the Obama administration’s expansive approach. Supporters of the Obama rule said it would help cut through complicated contract arrangements that allow some companies to shirk their responsibilities under federal labor and employment laws.

The unified agenda is a semiannual report that lists each agency’s best understanding of what actions it intends to take in the next 12 months. It’s a preliminary overview that may change, as some actions may be added and others removed. Actions can be notices, proposals, or final rules.

Return of the Bush Proposals

The proposals would be drafted by the Office of Labor Management Standards, which enforces the Labor-Management Reporting and Disclosure Act. The DOL now anticipates a December issue date for both. The two rules were included in previous agendas.

The department wants a return to a 2003 LMRDA interpretation that subjects union subordinates, or “intermediate bodies” to financial reporting requirements. This would require public sector unions responsible to file annual spending reports if they were subordinate affiliates of national or international unions that are covered by the LMRDA. That could include a union’s regional council, for example.

In the scond, the agency aims to re-establish the “Form T-1” that would require union trusts to file annual spending reports. Union trusts include strike funds or apprenticeship programs. The Bush DOL’s version, which was blocked by a legal challenge from the AFL-CIO, a labor federation representing 55 international and national unions, required union trusts with a total annual receipts of at least $250,000 to disclose its finances.

Labor advocates view the proposals as an attempt to add more of a financical disclosure burden on unions and their affiliates.

(Updated with quotes from NELP and IFA representatives.)