Hospitals and staffing companies must grapple with joint-employer disputes, wage and hour laws, and other issues.
Photographer: Apu Gomes/AFP via Getty Images

Gig nursing options are growing as hospitals turn to outside companies to fill staffing gaps. But the practice carries legal and regulatory risks for both sides.

The gig model that relies on independent contractors is more complicated in the highly regulated health-care industry than for rideshare and food delivery. The trend could leave facilities and the companies serving them vulnerable to misclassification accusations, joint-employer disputes, and complicated wage and hour laws, attorneys and others in the industry say.

Health-care facilities face complex licensing and certification requirements. As pandemic-era flexibilities that allowed travel nurses to easily move from state to state expire, staffing companies will have an even harder time navigating the regulations, attorneys say.

“Given the already serious issues with many of these health-care workers feeling overwhelmed and underpaid, they’re going to turn these questions not just to the individual hospitals, but potentially also to the companies that are hosting these platforms,” said Sonya Rosenberg, a labor and employment partner at Neal Gerber Eisenberg.

Mercy, a hospital system based in Missouri, developed an app to attract temporary workers before the pandemic hit.

The app allows the health system to align its needs with the varying values of the workforce, which can change year to year or person to person.

“When you think about a nurse’s life cycle or a clinical coworker’s life cycle, there are times in their life when flexibility is paramount,” Rocchio said. “I don’t see this model ever going away.” 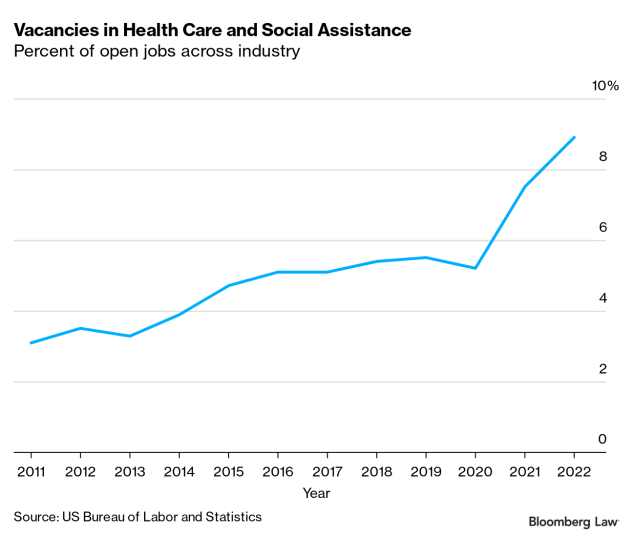 Health facilities should keep a classic employment law adage in mind when they weigh the pros and cons of working with more temporary workers, Ken Sulzer, a partner at Constangy Brooks, Smith & Prophete LLP said.

“If you’ve got a contractor and they have a problem, it’s your problem too,” Sulzer said.

And the problems can be complex.

For example, wage and hour laws are different in every state, so the apps need to ensure they stay up-to-date with requirements related to how they pay workers.

Each hospital could track time, provide meals and breaks, and schedule in a different way, said Adam Abrahms, a member of Epstein Becker Green and co-chair of the firm’s labor management relations practice group.

Making sure hospitals and apps are “providing the person the right amount of pay based on what they’re entitled to can be very complicated,” Abrahms said. If wage and hour laws aren’t followed, “it can result in immense liability,” Abrahms said.

In addition, hospitals, group practices, and other facilities should read contracts closely to determine which entity is liable if a gig nurse sues a health-care facility and a staffing company, Tracey Jaensch, a partner at FordHarrison, said.

And because of the reliance on technology, app-based work comes with an additional set of legal questions. Many of the apps promise nearly instant pay after a worker completes a job. If an app glitches and the company fails to pay a gig nurse on time, it opens itself to class actions, Sulzer said.

Highly regulated states also have laws related to cell phone use. In California, for example, employers would be required to pay a portion of workers’ cell phone bills because a phone was necessary for them to do their job, Sulzer said.

New health tech companies are carving a niche outside of the decades-old temporary staffing model in which nurses are generally assigned to 13-week shifts.

The emerging companies rely on different models to classify their workers. One model hires workers as independent contractors. The company isn’t an employer, and therefore is not responsible for overtime, minimum wage, workers compensation, or healthcare.

Other companies hire employees, and use platforms or apps that directly connect workers to facilities and their open shifts that make it easier for facilities to connect to providers than traditional staffing models. There are many different app-based, on-demand companies drawing major investments.

ShiftKey offers a platform that allows workers or providers to connect directly with health-care facilities as independent contractors, much like Uber does for drivers. About 300,000 nurses and other health-care workers have used the platform since it launched, ShiftKey’s CEO Tom Ellis said.

ShiftKey has allowed licensed practical nurse Jessica Banther to pick up shifts by the day alongside more regular travel nursing assignments that she plans weeks in advance. She’s used the app to connect her to shifts in seven states from Kentucky to Texas.

“Sometimes I pick up a shift just to see what things are like” in a new state or facility, Banther said.

Ellis said the independent contractor model “allows a lot of freedom and choice on both sides.” Nurses “love to be their own boss,” Ellis said. “That draws them in more than anything else.”

ShiftKey operates in 26 states, and is growing, but Ellis said he avoids states like California where rigid worker classification rules would make it more difficult to comply with the law.

“Some states are more challenging than others,” Ellis said. “I’d like to help the entire country, but I’m not super interested in being involved in lawsuits over this.”

Rideshare and delivery companies have faced misclassification lawsuits for years in federal and state courts, where workers allege they missed out on overtime, minimum wage, and other benefits only guaranteed to employees.

If the new apps do try to assert that health care workers are independent contractors, “that will be a huge legal issue subject to class action,” Sulzer said.

There hasn’t yet been a wave of litigation against the emerging companies, and many of the marketplace systems don’t rely on independent contractor relationships. But a handful of pending misclassification lawsuits were filed last year in California state court, and labor experts say more could follow if they gain traction in the industry.

At least one lawsuit has been filed in California state court against one app-based staffing company, CareRev, alleging it classified the workers who signed up for the app as contractors, rather than employees. CareRev declined to comment.

It’s too soon to say what the impact of a surge of app-based workers would be on the industry, health-care and labor and employment lawyers said. But the success of app-based staffing companies depends on how they navigate various labor laws and regulations

“Do they have the sophistication and ability to comply with the myriad laws that they need to in the various locations that they’re operating?” Abrahms said. “It’s often much easier said than done.”