President-elect ’s transition team can’t access government funding for transition activities or enter federal agencies to coordinate with staff until the General Services Administration formally acknowledges him as the winner—an action the agency has been unwilling to take while Trump’s campaign contests the results.

If the Biden transition is kept in limbo in coming weeks, it would jeopardize the ability of his appointees to be fully prepared by Jan. 20 to confront a pandemic that has altered workplace realities across the economy and left millions of workers unemployed, according to outside experts and six current and former DOL officials.

The delay could disrupt oversight of the federal-state unemployment insurance system—at least, temporarily—and affect allocation of disaster aid to workers in hard-hit areas, among other programs at a department that handles $12 billion in annual discretionary spending.

People out of work could face interruptions in unemployment insurance payments if Biden’s appointees don’t get adequate instruction on the latest policy issues. Biden’s team lacks access to legal opinions and internal planning documents from career officials, blocking them from troubleshooting to ensure continuity.

For instance, states might not know whether the incoming administration will permit them to give unemployment benefits to workers who quit their jobs or refuse to return because they feel unsafe.

“The transition team is kind of brainstorming solutions, but they’re doing it in a vacuum,” said Andrew Stettner, a Century Foundation senior fellow who studies unemployment insurance. “Some of the things that are a priority can’t be done, because career officials can’t divulge their advice.”

Further administrative problems loom for Biden as several virus-related programs, including jobless benefits for gig workers and paid medical and family leave, are set to expire next month—with little hope that Congress will deliver a legislative fix during the lame-duck session.

That means Biden’s team will have to ready multiple contingency plans depending on whether Congress passes another aid package, a daunting task for transition officials who can’t communicate directly with DOL staff.

And Biden must prepare to make quick decisions about how to handle the Trump administration’s Nov. 6 appeal of a federal court ruling that invalidated the DOL’s narrowed test for joint-employer liability.

The incoming administration also faces an immediate call on a regulation that eases employers’ ability to classify workers as independent contractors—a contentious issue that cuts across economic sectors. The DOL’s Wage and Hour Division is rushing to finalize the proposal before Trump leaves office. That will place Biden’s team in a tricky spot over whether and how to reverse it or freeze it from taking effect.

“You can’t really settle on a strategy until you see what the state of play is. We don’t even have a final rule,” Patricia Smith, a former DOL solicitor in the Obama administration, told Bloomberg Law shortly after Election Day but before media outlets called the contest for Biden.

Smith, who has since been named to Biden’s agency review team for DOL, was asked about the prospect of the Trump administration refusing to cooperate during the transition.

“It makes it damned harder,” she replied.

Current and former officials interviewed for this article, who requested anonymity because they weren’t authorized to speak to news media, described a warped atmosphere at DOL headquarters.

Some Trump officials are quietly planning for the transfer of power while pretending the election is still up in the air. Others have embraced the president’s baseless claims of election tampering and forbidden DOL career officials from communicating with Biden’s team.

Last week, Biden unveiled a 24-member transition team for labor agencies, a group marked by high-level agency experience that could help offset some problems caused by the rocky transition.

Afterward, Al Stewart, DOL’s deputy assistant secretary for operations, warned career staff in an email: “Please remember what we’ve discussed this morning: we are currently in a holding pattern, and as such, should not be reaching out or having conversations with anyone regarding transition.”

A DOL senior official said that at this point in the transition, national and regional senior civil servants typically would have been tasked with assembling reports and statistics to brief the transition’s landing team, but that they hadn’t received instructions to do so.

Biden said Wednesday that further delays in GSA signing off would hamper his administration’s ability to fight the coronavirus. He added that the law “doesn’t require that there be an absolute winner. It says ‘apparent’ winner.” 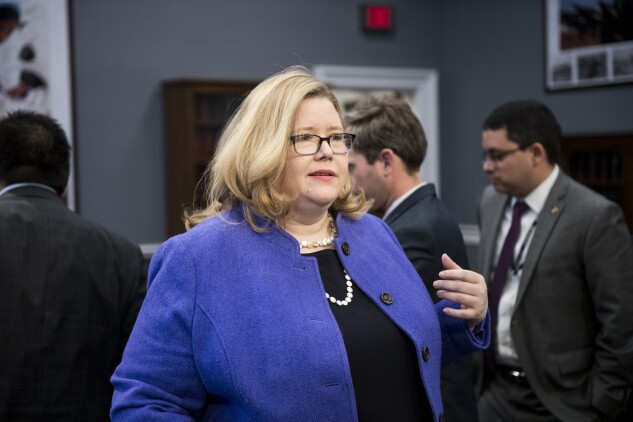 Trump officials have remained steadfast even as states have begun to formally certify election results.

A senior DOL political official, who vehemently disputed the idea that Trump should concede, said the department probably won’t begin conversations with the transition unless results are certified in five or six key states, including Georgia, where a manual recount concluded Thursday reaffirmed Biden’s victory there.

The next few weeks will reveal who is truly loyal to Trump, the political official said, pledging to continue following the administration’s direction until the president orders his deputies to “lay down arms.” If the roles were reversed, the official insisted, Democrats would do the same thing.

As the drama plays out, Biden’s team has been meeting with former agency officials, nonprofits, and advocacy groups to advance its preparations.

Several members of Biden’s team have deep experience at DOL and are regarded as contenders for jobs in the new administration. But even the savviest agency veterans could be confounded by the challenge of maintaining continuity in program delivery across a sprawling bureaucracy without direct access and training from existing staff, current and former officials warned.

For example, Biden’s team faces pressure from Democrats and worker advocates to roll out an emergency temporary rule to require employers to take precautions to protect workers from contracting Covid-19 on-the-job.

The anticipated implementation of such a policy will be more challenging if Biden’s appointees to the Occupational Safety and Health Administration are not briefed on details of the Trump administration’s existing workplace enforcement efforts.

The same goes for so-called dislocated worker grants, which help communities hit hard by job losses or natural disasters. Without a formal transition, Biden’s appointees will likely be unfamiliar with current details of the program, creating the potential for a backlog in processing applications for funding.

The transition standoff contrasts with the closest equivalent, in 2000, when the Florida recount delayed the arrival of George W. Bush’s transition team until mid-December, said Edward Montgomery, who led the outgoing Clinton administration’s DOL transition as deputy labor secretary.