Government officials in at least a half-dozen states want to make it easier to end the policing careers of abusive officers by making it hard for them to start fresh in new jurisdictions.

“The only way the state can revoke a peace officer certificate today is if that officer is convicted of a felony,” he said in unveiling a proposal to beef up statewide oversight of law enforcement. “There is no mechanism in Ohio to revoke a certificate for conduct that might be bad, might be horrible, but is not necessarily criminal.”

DeWine’s state is where 12-year-old Tamir Rice was killed while playing with a toy gun in a park. The Cleveland officer who shot him had a prior history of misconduct in Independence, Ohio, that wasn’t shared with its larger neighbor 10 miles away. After being fired by Cleveland, the officer was hired by the Bellaire, Ohio, police, but he rescinded his job acceptance during the ensuing media firestorm over his hiring. 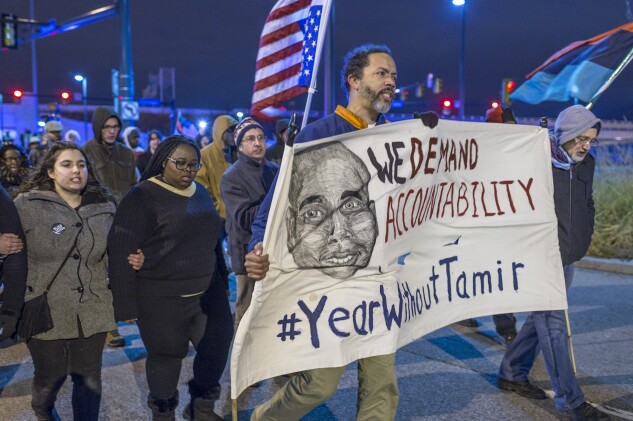 Demonstrators march in Cleveland on 29, 2015 after a grand jury declined to indict Cleveland Police officer Timothy Loehmann for the fatal shooting of Tamir Rice.
Photo by Angelo Merendino/Getty Images

Three of those states—California, Massachusetts, and New Jersey—along with Rhode Island lack any statewide procedure for decertifying officers. Though Illinois, Ohio, and Michigan do have a process, officials there are pressing for changes so that police departments would be required to report misconduct and so that officers could be suspended or stripped of licenses for violating the rules, just like doctors or lawyers.

“It’s such a common-sense remedy that we do for other occupations, that licensing removal is a standard part of the package. So why not for policing?” said Roger Goldman, a law professor at St. Louis University Law School who has researched police licensing for 40 years.


Massachusetts could get a law enforcement decertification law on the books by August.

Legislators there are considering two bills. One, (House Bill 4794), introduced by the governor, would institute a committee of police and civilians, half of whom would be people of color, to handle police misconduct cases and decertify when warranted.

“The murder of George Floyd in Minneapolis at the hands of police made clear that now is the time to get this done,” Gov. Charlie Baker (R) said in a June 17 news conference.

A bill introduced in the Massachusetts Senate (S. 2800) would go further than the governor’s by creating a certification program for police but hand the responsibility of certification and decertification to a panel made up of community members, and require that all police receive education on the history of slavery, lynching, and racism.

The Senate bill, backed by Senate President Karen Spilka (D) and Senate Minority Leader Bruce Tarr (R), is likely to quickly pass the Senate but its boldest policies are just as likely to be softened by the more conservative House and governor in the final, compromise bill. Legislative leaders said they intend to get legislation to the governor’s desk before their scheduled July 31 adjournment.

“There’s no bill we can write to replace the generations of culture-building work needed to root out systemic racism,” but the bill is a “vital first step,” said state Sen. Sonia Chang-Diaz, who led the drafting of the bill.

“With this legislation, we can put in place structures that force institutions to respond to incidents of injustice with vigor rather than silence and complicity. We can create a shift in law enforcement towards prevention and de-escalation and we can start to reprioritize public safety funding away from criminalization and into community investment,” Chang-Diaz said.

“I find it incomprehensible that some states don’t have a vigorous system for certifying and decertifying,” Michael Scott, Arizona State University criminology professor and former police chief in Lauderhill, Fla., said in an interview.

To be effective, a licensing regime must “have a degree of independence, a degree of pro-activity, and a degree of standards that will in fact be enforced,” Scott said.

DeWine, Illinois Gov. J.B. Pritzker (D), and Michigan Attorney General Dana Nessel (D) have urged legislatures in their states to address what researcher Goldman calls “wandering officers"—those shown the door by one law enfortcement agency who get new badges elsewhere, either because the new jurisdiction overlooked past performance or failed to discover the prior misconduct.

In all three of those states, licensing regimes generally require a criminal conviction in order to have licensees revoked.

On the other side of the spectrum are Florida and Georgia, which together conducted half of the decertifications in the U.S. in 2015, the most recent year covered by an analysis by Seattle University Professor Matthew Hickman.

Even with rigorous licensing procedures, Scott said that when he was a police chief, it took time and effort to weed out problematic recruits when they previously worked in other states.

As states consider changing their police licensing regimes, one of the factors to watch will be how the new requirements would mesh with -- or conflict with -- collective bargaining agreements between police unions and local departments.

“The collective bargaining agreements make it virtually impossible to discipline bad actors and also give officers accused of misconduct abilities that no other workers receive,” Jon Riches, director of national litigation and general counsel for the Goldwater Institute said in an interview. “And they receive representation from the union at the taxpayer expense. The taxpayer is footing the bill to keep bad actors on the force.”

Among the recommendations: addressing “wandering officer” syndrome by starting a national database of former police officers who were fired for gross misconduct.

“We must do more to make sure that officers who lack that professionalism and who show racial bias, who are biased, are not wearing a badge,” DeWine said. “It’s time for us to get these things done.”

—With assistance from Adrianne Appel in Boston.

To contact the editor responsible for this story: at krizzo@bgov.com