A waitress prepares to carry a tray of drinks to a restaurant customer.
Chris Ratcliffe/Bloomberg via Getty Images

Tipped workers, the vast majority of whom are women, are fighting to sustain the momentum behind phasing out a tipped minimum wage of $2.13—a level that hasn’t budged since 1991 despite increases in the regular minimum wage.

Some tipped workers are demanding change, pointing out that women and people of color comprise most of the industries that rely on tips, while those same workers have been hurt most by the pandemic. Congressional progressives, including Sen. (D-Wash.), have vowed to address the stagnant tipped minimum wage.

Close to 70% of tipped workers are women, according to National Women’s Law Center data, and in pre-pandemic times, the poverty rate for women working in tipped roles “was nearly 2.5 times the rate for workers overall.” Worker advocates say a tipped wage structure exacerbates existing gender and racial pay gaps, which show women making about 82 cents for every dollar earned by their male colleagues, with women of color making even less. Black women have also faced the slowest job recoveries since January 2020, according to recent Labor Department data.

“It’s sort of the same people who are getting impacted badly by the pandemic, because it’s these people who are in these service roles,” said Patricia Anderson, an economics professor at Dartmouth College.

The pandemic also has slammed restaurants. Data from the National Restaurant Association shows that more than 110,000 eateries or bars have shut down temporarily or permanently. That’s led the restaurant and franchise lobbies to argue against phasing out the tipped minimum wage.

“It changes the nature of the job for tipped workers, who are accustomed to taking home a lot of money in tips,” said Michael Saltsman, the managing director of the Employment Policies Institute, a fiscally conservative group that studies entry-level employment. “The movement to preserve the tip income and to preserve the tipped wage has been led by women.”

Brianna Griffith is a 32-year-old restaurant worker from Fayetteville, W.Va., where the tipped minimum wage is $2.62. Griffith lost her job last March and was unemployed for several months, forcing her to move in with her grandmother. She called the tipped minimum wage “ridiculous,” and attended rallies hosted by One Fair Wage, a group working to end it.

She said a phased-out tipped minimum wage would change her life.

“I could actually maybe move back out of my grandmother’s,” she said.

Waiters and waitresses make an average hourly wage of $12.75, according to data from the U.S. Bureau of Labor Statistics.

Simone Barron, a former server in Seattle who supports maintaining a tipped minimum wage in a state that doesn’t have one, said she took a hit financially when the owner of the restaurant where she worked modified the business structure to adapt to the labor cost increases.

“I wasn’t angry at all, they were trying to keep us above water,” said Barron, a single mother of an 18-year-old son. “The effect of Covid, the effect of the minimum wage, I’ve lost count of the percentage” of closed restaurants.

She said tips, and the service industry’s ample opportunities, attracted her as a teenager.

“The service industry provided me some fantastic options to get out of a very poor situation,” she said. “I was making far above the minimum wage, far above what my friends were making in their retail jobs.”

“They’re supposed to be the party of the workers, and I’m not seeing that right now,” she said. “They simply must not understand the industry.”

David Cooper, a senior economic analyst at the Economic Policy Institute, a worker-focused policy group, said the momentum for an increase will continue.

“I think we’re going to continue to keep hearing about this, even if it’s not at the federal level,” he said.

Thomas Kochan, the co-director of MIT’s Sloan School of Management’s Institute for Work and Employment Research, said that given how many workers live on a tipped minimum wage, “that’s a big number to be working in a very difficult job and receiving poverty level wages.”

“We have to start to address this if we’re going to reduce inequality,” he said. 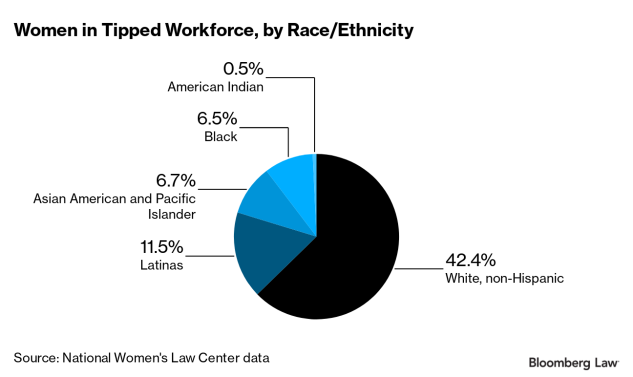 The Covid-19 pandemic adds tension to this already-hot debate.

“As small businesses reopen more fully, these same people are the first in line to be rehired—but only if their jobs still exist,” Michael Layman, the vice president of federal government relations for the International Franchise Association said in an email. “Making it harder for small businesses to hire workers is going to mean that fewer workers are hired, not more.”

Workers’ rights advocates say now is exactly the right time to do so. Adam Shah, the national policy director of Jobs with Justice, said elected officials should keep in mind the Biden campaign promise to “build back better.”

“Building back the same would be having the tipped minimum wage for these essential workers, many of whom have experienced long bouts of unemployment” during the pandemic, he said.

MIT’s Kochan also said there may be an argument to be made that business owners have an opportunity to restructure when phasing out a tipped minimum wage, thereby ensuring a more stable workforce long term.

“To use this opportunity to restructure in ways that work for them as businesses, and work better to attract the employees that they want,” he said. “I think there’s a genuine recognition that we haven’t taken adequate care of the people at the bottom of our wage structures.”