A Teamsters member helps out during a food distribution event in Los Angeles Wednesday. The International Brotherhood of Teamsters saw a dip in membership in 2019.
Photographer: Kevin Winter/Getty Images

The International Brotherhood of Teamsters in 2019 reported its largest single-year drop in membership in at least 20 years as the Service Employees International Union added nearly 45,000 members, according to recently released annual union financial reports filed with the Department of Labor.

The self-reported union data provides a nuanced look at the health of labor organizations across the country. Most recent postings suggest a mixed assessment with some unions recovering from membership losses over the past decade and others, such as the United Food and Commercial Workers, continuing a downward slide.

Union officials cautioned that membership fluctuates. The Teamsters said that despite its drop in numbers last year, internal numbers in February pointed to the highest levels of membership under President 21-year tenure.

“In any given month, we can fluctuate 4% depending on things like seasonal workers, conventions, trade shows, motion picture shows,” Teamsters spokesman Bret Caldwell said, adding that the union doesn’t use DOL reports as a barometer of success. 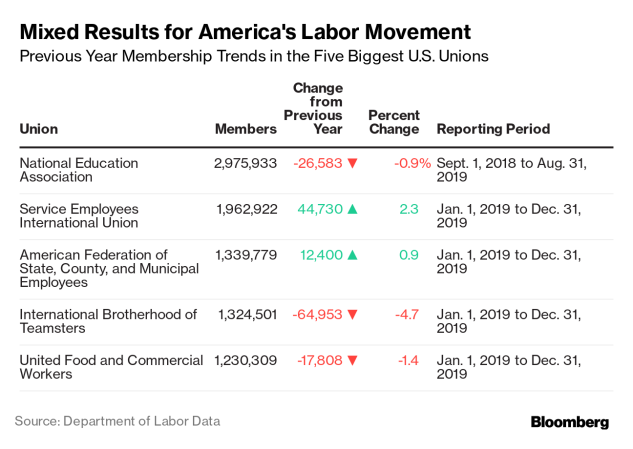 The new data releases follow a separate population-based estimate put out by the Bureau of Labor Statistics in January that estimated unions across the board collectively lost about 100,000 members in 2019.

The SEIU, Teamsters, and UFCW have been the three largest private-sector unions for some time, according to Bloomberg Law analyst Robert Combs. But their membership trajectories tell different stories.

“They all started this century with about the same number of members, but their fortunes have diverged since then,” Combs said. “Most unions, including the UFCW, lost members in the recession and have kept losing since. But the SEIU’s ranks have actually grown, and the Teamsters, despite their 2019 decline, have pretty much broken even over time.”

Many labor organizations issue their annual reports in late March or early April, although some organizations—including the AFL-CIO, SAG-AFTRA, and the International Brotherhood of Electrical Workers—report numbers in the summer or fall.

The country’s largest union—the National Education Association—reported in November that it lost 26,583 members or about 0.9% of its membership for the period running Sept. 1, 2018 to Aug. 31, 2019.

Here’s a sampling of which unions added members and which had losses. 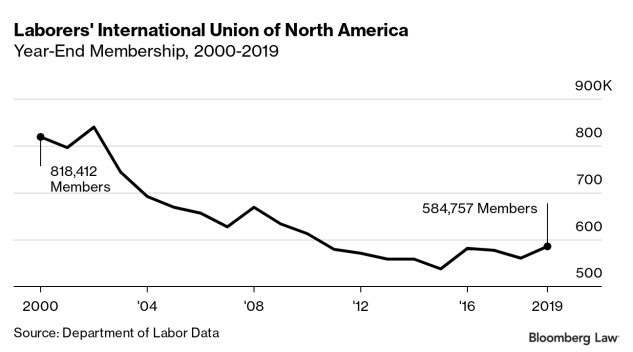 LIUNA, one of the country’s largest construction unions, added more than 20,000 new members after two continuous years of losses. The union has dealt with a series of membership losses in the past two decades, including a seven-year slide brought about by the Great Recession. More than 70,000 public employees and 47,000 mail handlers also are affiliated with LIUNA, according to the union. 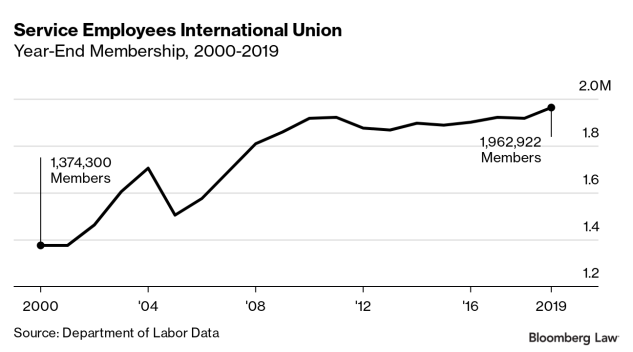 The SEIU posted a strong year of union membership gains after losing a handful of members in 2018. The union represents workers across several sectors with concentrations in the service industry and health care. It defied membership patterns from other unions by adding workers during the Great Recession. The SEIU’s membership total last year is the union’s highest since at least 2000.

“SEIU members are proud that more people are successfully fighting to form their union, particularly in the child care, higher education, airports and hospital sectors,” union spokeswoman Sara Lonardo said in a statement. “In addition, more public employees are sticking together in SEIU because they know a union is the best way to ensure a more secure future for themselves and their family.” 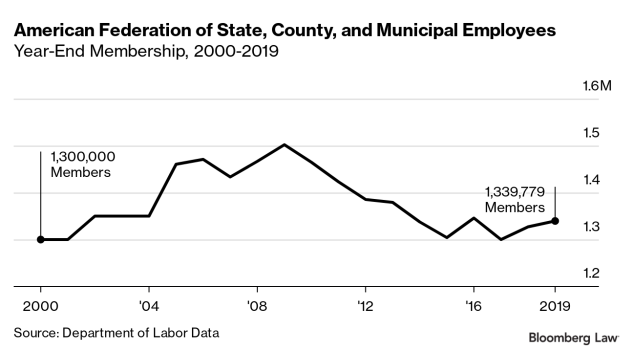 AFSCME is one of the largest public-sector unions in the U.S. with workers in a diverse range of industries from education to law enforcement. Union membership this century peaked at about 1.5 million members in 2009 but fell during a period of budget cuts tied to the financial crisis. Last year was the second straight year of adding members. 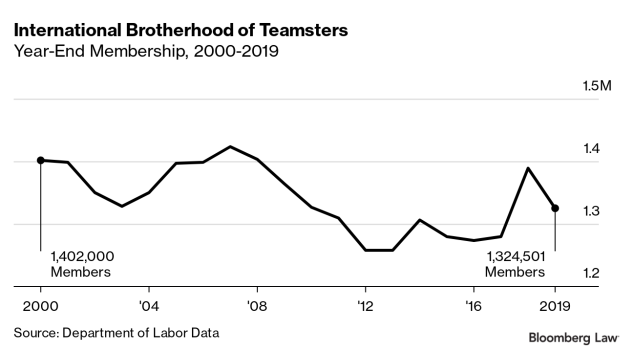 Spokesman Caldwell said the union isn’t able to pinpoint what sectors contributed to the downturn. Despite the loss, the union’s total membership remains above where it was most of the past decade thanks to an additional 100,000 members in 2018. 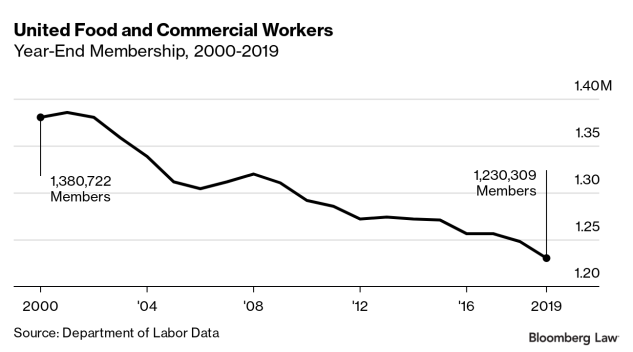 Last year continued a downward trend in membership for the UFCW, dropping the union to a level unseen since at least 2000, the earliest year for which records are available. The union posted four years of membership gains and 15 years of losses since 2000. 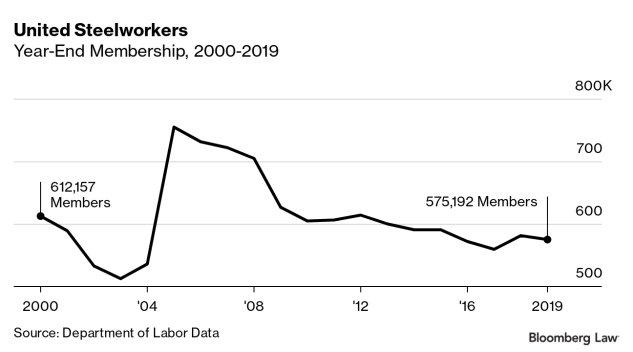 Despite large fluctuations in the mid-2000s, the Steelworkers have held membership rates relatively steady in the past two decades. The union has been an outspoken advocate for international trade reform, saying that unfair competition has cost its members’ jobs. 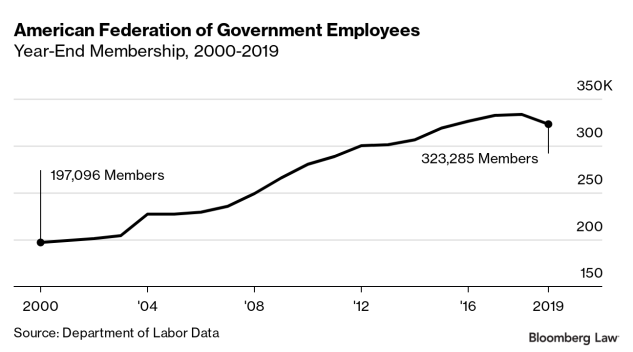 The AFGE posted its first set of membership losses in nearly 20 years after its rosters shrunk by more than 9,000 workers. The union primarily represents federal government employees and has been engaged in a number of disputes with the Trump administration over what it says are efforts to shrink the federal workforce.

Not all unions scheduled to turn over annual reports in late March have filed them. The United Auto Workers and Air Line Pilots Association are two of the largest unions with absent filings.

The Department of Labor issued guidance in late March that effectively extended the deadline for annual reports from March 30 to June 30 if unions have a coronavirus-related reason for not filing on time.

The guidance by the DOL’s Office of Labor-Management Standards, which has oversight of union affairs, didn’t specify what’s an acceptable delay due to Covid-19, the disease caused by the coronavirus.

Effects of the coronavirus on union membership won’t be captured until the next batch of annual reports arrives in the summer and fall.

“It’s hard to say what the impact of this new virus-driven economic downturn will have, but the SEIU and Teamsters have proven to be recession-resistant in the past,” Combs said. “We’ll see if that pattern holds true in 2020.”