Teachers and demonstrators hold signs during a #RedforEd protest outside the Oklahoma State Capitol in Oklahoma City in April 2018.
Photographer: Scott Heins/Bloomberg via Getty Images

Teacher strikes across the U.S. have yielded a marked increase in bargained wages since a headline-grabbing 2018 walkout in West Virginia reinvigorated #RedforEd protests in states and major cities across the country, a Bloomberg Law analysis found.

Teachers unions have leveraged the large-scale walkouts, where teachers gather wearing red to decry the state of public education in the U.S., to win greater pay raises for members by bargaining in solidarity with the mass protests, according to a Bloomberg Law analysis of wage settlements from 848 contracts signed from 2015 through 2019. The movement has even triggered bigger boosts in teachers’ wages in districts where work stoppages have not taken place.

From 2018 through 2019, teachers’ salaries in the first year of collective-bargaining agreements rose by an average of 3.2% nationwide, nearly a full percentage point higher than the 2.27% average increase teachers received from 2015 through 2017, according to the analysis.

Teachers won much greater wage increases on average in states that were home to the largest protests in 2018-19, where contracts had an average first-year salary increase of 4.41%, compared with other states, where contracts averaged a first-year raise of about 2.43%, according to the analysis.

By contrast, before the West Virginia walkouts, states with #RedforEd action saw smaller wage increases in teacher contracts that averaged 2.72% in 2015-17.

While #RedforEd walkouts have been less successful in winning concessions on related demands, such as increases in classroom funding and reductions in class size, the movement has helped to reshape the national debate over public education and the economic value teachers provide. The wage gains secured for teachers since the movement went mainstream in 2018-19 are notable in that they were negotiated at a time when unions are generally far less powerful than in past generations.

Social media presence has been key to influencing public opinion and, hence, contract negotiations. This was apparent in the smaller gains made in states that did not experience a significant #RedforEd action, where the average wage increase was 1.97% during 2015-17 before rising to 2.43% in 2018-19.

“The credible threat of a strike is almost as good as a strike,” said Rebecca Givan, an associate professor of labor studies and employment relations at the Rutgers School of Management and Labor Relations.

An individual or local union now has a credible strike threat even if they are not, themselves, organizing for a strike, which means a school district at the other side of the country can look at what happened in West Virginia, Chicago, or Los Angeles, and decide they don’t want to grapple with a strike, she said.

“It’s not an accident that these strikes are contagious,” Givan added. 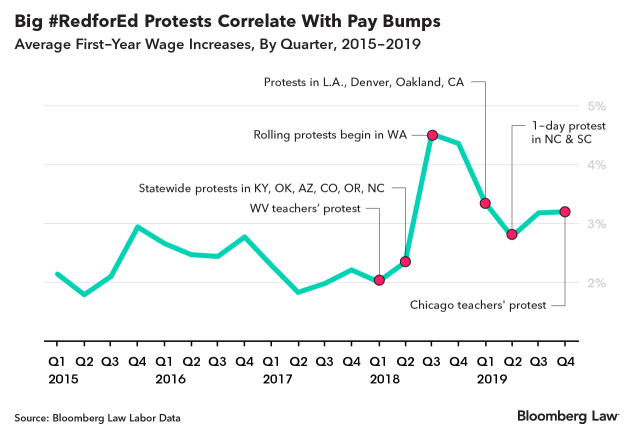 #RedforEd, by the Numbers

Educators in California, Colorado, Illinois, New Jersey, Oregon, and Washington have engaged in strikes over collective bargaining since walkouts in West Virginia over nearly two weeks in early 2018 popularized the #RedforEd protests.

The rising pressure to increase teachers’ pay is largely the result of education funding being left behind amid economic gains in recent years. Teacher pay has “lagged dramatically” since the 2008 recession as lawmakers in states across the country have faced political pressure to hold the line on taxes and spending, Givan said. Stories of teachers working second jobs to make ends meet, or paying for classroom supplies out of their own pockets because of slim budgets, are common in blue and red states alike.

Many of the rallies helped teachers’ unions capitalize on the economic recovery. North Carolina protests in 2018-19 included participation from roughly 215,000 teachers and resulted in educators receiving a 6.5% raise in the 2018-19 budget. The state is currently mired in a budget battle over the issue of teacher pay. The governor vetoed a 2019-2021 budget bill, which would have included an additional 3.9% wage increase for teachers and a 2% bump for other staff, because he’s holding out for a larger increase in educator pay.

Likewise, a 75,000-teacher walkout in Arizona from April 27, 2018, to May 3, 2018, led Gov. Doug Ducey (R) to raise teacher salaries by 20% through a state education budget bill. Bloomberg Law’s analysis included wage settlements for individual school districts but did not include statewide legislative actions, such as those in North Carolina and Arizona.

Washington state school districts experienced the biggest bump over the last two years, with teachers unions securing raises that more than doubled (216%) the average of the previous three years. Other states that experienced large wage gains after the West Virginia protests were Oregon (up 25% in 2018-19 compared with 2015-17) and Illinois (up 21%).

Bloomberg Law’s analysis also showed that extra pay unions have won for teachers amid the #RedforEd movement was less likely to come in the form of a one-time bonus.

“The nationwide boost in wages since the strikes has not been accompanied by a surge in the use of bonuses or other lump-sum payments, meaning the data indicates protests have created lasting, not just temporary, raises,” said Bloomberg Law analyst Robert Combs. “The number of contracts that included lump-sum payments decreased from 7.6% in the years before the strikes to 4.2% since 2018.” 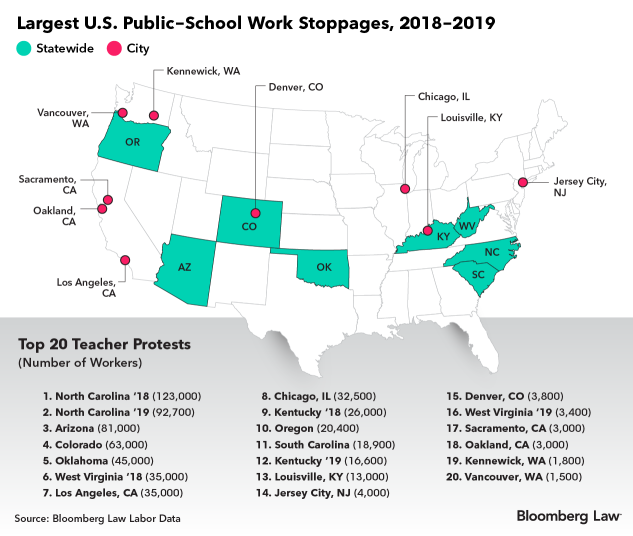 But recent collective action by teachers hasn’t always translated into big pay bumps. A large rally at the Indiana statehouse in late 2019 produced a muted response from lawmakers, who said more funds won’t be available in 2020 because it isn’t a budget year.

Educators in the Sacramento, Calif., unified school district staged a 2,000-person, one-day strike in April 2019 hoping to pressure the district to abide by a 2017 collective-bargaining agreement. The dispute is ongoing. The California State Auditor said the school district could be headed toward insolvency.

While red-clad teachers have rallied for years, a big factor playing into recent successes is the unique service they provide. “Teachers are a different breed—they’re very popular with the public, they’re very hard to replace,” said , a shareholder in Littler Mendelson’s New Haven, Conn., office who specializes in labor law.

About three dozen states have laws that prevent teachers from striking. But teachers are increasingly ignoring those laws, and elected officials in many districts are not seeking to enforce them, Stanevich said.

Generally, when there is a state law that prohibits a strike, an employer can seek an injunction to send employees back to work, along with fines for those who fail to comply, Stanevich said.

“What we’re seeing across the country in places where these strikes are prohibited is that they’re not seeking injunctions or penalties, which really emboldens the strike action,” he added.

Teachers have had greater success in winning concessions from state legislatures on salary increases than issues of structural change, such as class size. For example, the 2018 nine-day teacher protest in Oklahoma’s capital yielded a salary bump of at least $5,000 for base wages, but teachers failed to get the rest of a $906 million funding increase they sought to overhaul state education.

For many teachers, the recent #RedforEd protests were the culmination of years, if not decades, of organizing. Larry Delaney, president of the Washington Education Association, is proud of that long-term strategy.

His state’s widespread rolling strikes have yielded the largest first-year salary bumps in the agreements Bloomberg Law reviewed. Teachers in the state landed an average wage increase of 10.87% in their contract’s first year since 2018, while the average increase was 3.44% in the three prior years, according to Bloomberg Law data.

“It’s been boiling for a long time in Washington state, with rolling walkouts since 1999,” he said. “2018 was the culmination of 15 years, and really 15 years of hard work and frustration.”

Teachers created enough political pressure to get a $2 billion revenue package through the state legislature. They then had to bring that force into the bargaining room, to seek higher salaries from district officials interested in spending money elsewhere.

Teachers in Kentucky are hoping to use that playbook in the current budget session, especially because their organizing and support helped put Gov. (D) in office. Teachers have spent years staging “sick-outs” that sent thousands of red-clad protesters to the state capital to decry bills paring back pension benefits and tweaking the structure of the state’s education system.

Beshear, who filed suit to fight a law that trimmed teachers’ pension benefits during his time as state attorney general, has promised to give teachers a $2,000 pay raise.

Since taking office in December he has reinterpreted state law to give teachers permission to stage “sick-outs” at the statehouse without fear of reprisal from the state’s Labor Cabinet. Educators are optimistic, even though winning extra pay means getting buy-in from a skeptical Republican-controlled legislature.

“Educators were grand marshals for [Beshear’s] inauguration parade, and that’s the first time a governor hadn’t led the parade,” said Eddie Campbell, Kentucky Education Association president. “We just have a ripple effect which keeps going down the pike.”