Efforts to require automatic workplace retirement savings in Oregon, California, and Illinois were so successful that now the pressure is on Congress to include mandatory coverage and a tax credit in a broad retirement savings proposal for the U.S.

Nearly one in four working-age Americans aren’t saving for retirement, and those who are say they aren’t saving enough, according to a PwC analysis earlier this year. Congress took a stab at closing that retirement gap in 2019 with legislation designed to make it easier for businesses to establish voluntary 401(k)-style plans; research has shown that workers are overwhelmingly more likely to build a nest egg if they’re given access to a workplace-based savings plan.

Lawmakers in both chambers are considering legislation that would complement the 2019 SECURE Act, automatically enrolling new employees in voluntary workplace plans and rewarding participation even more. Companies and other retirement-focused groups are throwing their support behind mandatory coverage and an expanded refundable matching contribution tax credit that would, in effect, create a government-funded match.

Together, the proposals could be a game-changer, enrolling millions of Americans in workplace retirement plans without them even knowing it.

ARA has thrown its support behind a federal automatic-individual retirement account program that would require large and mid-sized employers who don’t already offer a retirement plan to enroll their workers in IRAs through an automatic payroll deduction arrangement. The Automatic IRA Act, introduced by Sen. (D-R.I.) in the last legislative session mimics successful state-run auto-IRA programs in nine states and two cities, with one important exception: The federal government wouldn’t sponsor private-sector plans.

Oregon, for example, which was the first state to adopt its OregonSaves auto-IRA program, sponsors the IRAs and contracts management to a financial services company. Every account is tied to the individual—not to their employer—ensuring portability and ease, according to Oregon State Treasurer Tobias Read. That leaves employers responsible for nothing but sharing their employment roster with the federal government.

“There’s a relentless focus on our part to make it as easy as possible,” Read said. “Our point here is to introduce something that is otherwise complicated and intimidating and make it simple for employers and their workers.”

Finance Committee Chairman (D-Ore.) and six other Senate Democrats introduced legislation in late July that would restructure a little-known tax credit called the Savers Credit into a government match on qualified retirement contributions. Individuals earning up to $32,500 and couples earning under $65,000 would be eligible for a refundable credit of up $1,000 a year, depending on how much they contributed to a qualified plan. 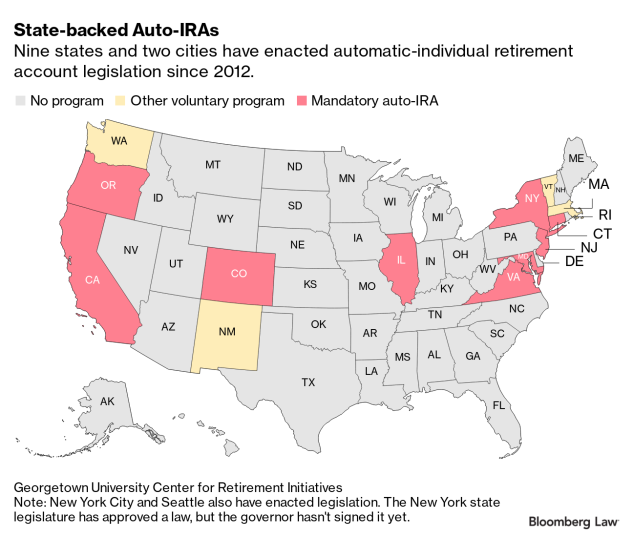 If the Wyden-led bill, known as the Encouraging Americans to Save Act, were combined with the Auto IRA Act, Employee Benefits Research Institute models show that Congress could create 51 million new retirement savers and add more than $6.2 trillion in overall retirement savings in the next 10 years.

“We need to encourage state auto-IRAs and bring their success to the national level,” said David Certner, legislative counsel and policy director at AARP. “Auto-enrollment and expanded coverage are what we need if we really want to address the retirement gap.”

National coverage was the intent of the auto-IRA policy in the first place, according to Mark Iwry, a nonresident senior fellow of economic studies at the Brookings Institution. Iwry, who served as deputy assistant secretary for retirement and health policy under former President ‘s Treasury Department, was an early founder of the so-called “negative-election” retirement model, whereby participants’ income could be deferred automatically into a savings vehicle unless they opted out. He helped draft the first auto-IRA policy proposal alongside David John, a former senior research fellow at the Heritage Foundation and policy adviser at AARP.

Auto-IRA legislation was upstaged by the Affordable Care Act, but it didn’t die, Iwry said. Advocates turned their attention to the state level; states could serve as a proving ground for a federal mandate to take hold.

Auto-IRAs have faced legal pushback due to the preemption clause in the Employee Retirement Income Security Act, which sets minimum standards for voluntary workplace health and retirement plans.

The Ninth Circuit U.S. Court of Appeals in May affirmed California’s CalSavers program because the state-run program “does not require employers to operate their own ERISA plans,” the ruling read. It served as a big win for other states such as Colorado, Virginia, and, most recently, New York, because it clearly distinguishes state-borne auto-IRAs and traditional workplace plans such as 401(k)s.

A federal mandate would complicate that loophole, said Aliya Robinson, senior vice president for retirement and compensation policy at the ERISA Industry Committee. ERIC settled a lawsuit against OregonSaves in 2018 streamlining the exemption for large member employers.

“Our concern has always been about the preemption clause,” Robinson said. “It would be our concern for a federal auto-IRA as well.”