This is where Benji K. reports to work five days a week, as he’s done for 28 years. He’s nearly 50 years old now, with a graying mullet and a firm handshake. He wears a Kiss T-shirt—he’s a diehard fan, after seeing them perform live when he was young. He’s created a Kiss museum in his basement, where he collects band memorabilia, and dolls in particular—"too many to count,” he says.

Listen to this story here.

Here at NW Works Inc., Benji, identified by his first name to help preserve his anonymity, assembles screw kits for SouthernCarlson, a tool and supply distributor. He uses a customized and color-coded pegboard to methodically count out the required number of screws. Benji then puts the screws in individual plastic bags. He’s paid based on the number of screw kits he completes each day.

“This is my favorite right here,” Benji said, referencing the kits. “I did 50 yesterday.”

Benji is one of nearly 44,000 workers in the U.S. who legally earn less than the minimum wage solely because he has a disability. For many, their hourly pay is far lower than the federal minimum wage of $7.25. At Benji’s workplace in Virginia, workers earn an average of $5.46. 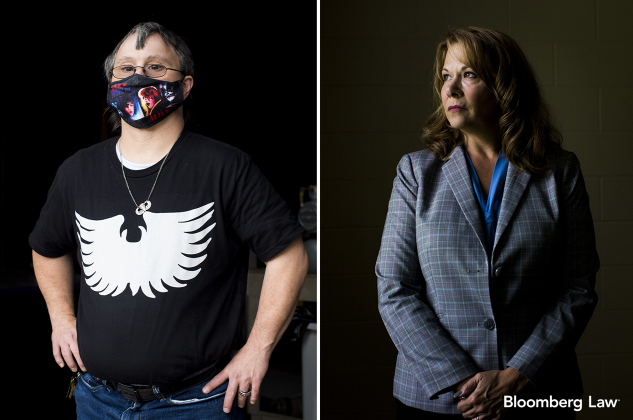 Benji K. has worked at NW Works in Virginia for the past 28 years and now assembles screw kits at the facility. Debera Taylor, NW Works CEO, is Benji’s boss.
Photographer: Pete Kiehart/Bloomberg

Employers can pay people with disabilities less than the minimum wage if they hold a “14(c) labor certificate.” The policy has come under scrutiny by disability advocates, businesses, states, and even Congress.

Some argue these workers shouldn’t be paid less than minimum wage under any circumstances because it’s discriminatory and amounts to “unjustified segregation.” Others say the program is the best chance for some people with disabilities to earn wages and feel productive. The law raises questions about whether the program offers work opportunities for people who otherwise might not have them, or if it exploits people with disabilities for low-cost labor.

“Their jobs are important to their self-esteem,” said Peter Berns, CEO of The Arc of the U.S., an advocacy group for people with intellectual and developmental disabilities. “We do really care what happens to these people, that they have employment opportunities, or that they have other good opportunities for how they spend their day.”

But Berns adds, “It is going the way of the dinosaur, so to speak. There are better ways to incentivize employers to hire folks with disabilities.”

A proposal that encourages states to end the program was included in the House Democrats’ $3.5 trillion dollar spending and tax reconciliation package. It would provide grants to states to support alternative business models or help workers find jobs elsewhere, in exchange for states ending the payment of subminimum wages over a five-year period.

The legislation is in line with a recommendation from the U.S. Commission on Civil Rights. Some Republicans oppose proposals to terminate the 14(c) program, and the reconciliation package’s ultimate fate in Congress is uncertain.

The Fair Labor Standards Act of 1938 created the certificate program under the law’s Section 14(c), a carve-out to legally pay people with disabilities a subminimum wage that’s remained on the books for eight decades.

Only certain disabled workers can be paid a subminimum wage under the FLSA, defined as individuals “whose earning or productive capacity is impaired by a physical or mental disability,” such as developmental disabilities, blindness, cerebral palsy, alcoholism, and drug addiction. Workers with disabilities are more widely protected by the 1990 Americans with Disabilities Act, which prohibits employers from discriminating against people with disabilities, including in pay.

Yet unemployment among people with disabilities has remained consistently high. The unemployment rate for persons with a disability was 12.6% in 2020, compared to 7.9% for those without a disability, according to U.S. Bureau of Labor Statistics data.

More than 43,900 workers are employed under the 14(c) program, according to Bloomberg Law data, and as of July 1, employers held 702 active certificates.

The U.S. Department of Labor’s Wage and Hour Division oversees the 14(c) program, both rubber-stamping the certificates and ensuring employers comply with its requirements. The agency found violations in 83% of the 3,325 14(c) investigations it conducted from 2005 to 2020, WHD Acting Administrator Jessica Looman said in an email.

President has called for Congress to eliminate the subminimum wage for disabled workers, a WHD spokesman said when asked about the agency’s stance on the 14(c) program.

Litigation challenging the program has been rare. However, the Civil Rights Commission report last year criticized the DOL and the Justice Department for “persistent failures in regulation and oversight” that allow businesses to profit from the workers’ labor while limiting their “full potential.”

Employers must pay a “commensurate wage,” which is determined through time studies to evaluate a worker’s productivity. The exact dollar amount is then analyzed in proportion to the wage and productivity levels of people without disabilities, according to a DOL fact sheet.

Berns, CEO of The Arc, also said that there is tremendous unemployment and underemployment for people with disabilities. Berns’ organization has state and local chapters nationwide. Some chapters of The Arc hold 14(c) certificates, though Berns says the organization is working to eliminate them.

The Arc also has other employment options available for people with disabilities beyond its 14(c) programs, as well as day programs and residential services, giving Berns some flexibility. They’re “definitely moving away from the 14(c) program,” he said. “You’re seeing the pace of that exit really escalate.”

Debera Taylor isn’t waiting around to find out what might come out of the debate over how to proceed with Section 14(c). Taylor, who is Benji’s boss, has served as chief executive officer of NW Works in Virginia since 2019.

NW Works holds a 14(c) labor certificate and also offers other employment opportunities for workers with disabilities—many of which pay the minimum wage or above. It’s located around the corner from a large Rubbermaid manufacturing facility, and the company is one of NW Works’ longest-standing business partners.

With the writing on the wall as states phase out 14(c) programs, Taylor’s goal is to transition away from that model and she is grappling with how to do so.

“What does that financial impact look like on the organization? Do we have to subsidize any of that contract?” said Taylor. For businesses, it’s not an easy task, but she said it will be possible for her company to remain viable if 14(c) ends.

She said the value NW Works offers, as well as their relatively low overall labor costs to companies, helps attract prospective businesses. Contracting with NW Works for workers who earn minimum wage or above is “still a lower cost solution” for companies looking to work with the organization, she said.

“It is a balance between, ‘how can we balance providing the production to the partner, the vendor partner, and hitting their goals, and still remaining a viable partner for them with the labor and what they pay for us?’” said Taylor.

She would, however, like to see the earnings cap raised for people with disabilities. Currently there is an earning ceiling of $1,310 per month for non-blind workers with disabilities, and workers who earn more than that are in danger of losing federal benefits like Social Security pay.

“If 14(c) goes away and we work our way out of 14(c) and we are paying our clients minimum wage or better, we need to make sure that we’re not putting their other benefits at risk,” Taylor said.

Benji uses a board to count out the correct number of screws for a kit.
Photographer: Pete Kiehart/Bloomberg

Taylor said workers paid under the 14(c) program fulfill jobs for manufacturers, but they also have flexibility because NW Works offers a range of activities for the people who enter the facility each day.

In Benji’s case, that could mean computer time spent looking up pictures of Kiss.

“Maybe he’s just not feeling productive today, he doesn’t want to work, and the job coaches in the back see that,” she said. In that case, workers can go into the facility’s community day program, or volunteer in the community in some capacity.

Kevin Fritz, an attorney with Seyfarth Shaw LLP in Chicago, has counseled employers interested in learning more about the 14(c) program, and said that “in all cases,” he’s advised against it.

“I’ve never, ever recommended that they apply,” he said. “I’ve never seen this as an area where I’ve found it to be appropriate.”

Fritz said it was important to know what the U.S. Equal Employment Opportunity Commission thought about the program, the agency which enforces federal workplace anti-discrimination law, including the ADA. The agency declined to provide a response on its official stance, though it has previously won judgments against employers that paid “severely substandard wages” to workers with intellectual disabilities.

“The world has changed so much, even in the past 10 years, that individuals with disabilities are able to participate in ways that they never have been able to before,” Fritz said.

Will Workers Be Left Behind?

No one really knows what could happen to the workers, though, if Section 14(c) is phased out, and whether workers with disabilities would lose employment opportunities.

Alaska, Maine, Maryland, New Hampshire, and Vermont have fully done away with a subminimum wage for workers with disabilities. California, Colorado, Hawaii, Oregon, and Washington have passed laws that will do the same in the coming years, according to Bloomberg Law research. On Oct. 4, Illinois banned state agencies from entering into new contracts that pay a subminimum wage and mandated they re-negotiate existing contracts to pay at least the minimum wage.

There aren’t, however, extensive studies on what’s happened in those states for workers who were previously employed by 14(c) labor certificate holders.

“There are people who can be moved to competitive employment and there are people who would have great difficulty doing that,” said Peter Blanck, head of the Burton Blatt Institute at Syracuse University. Blanck has studied disability law, as well as the 14(c) program.

“We’re at a novel time where people are looking for ways to reform the 14(c) program, and it’s not as simple as just raising the minimum wage for everyone,” Blanck said. “You might have the same outcome whereby many people with disabilities who don’t need to be there just stay there.”

Hugo Dwyer, the executive director of the advocacy group Voice of Reason, agreed that if 14(c) goes away, workers will be left behind.

As for Benji, when asked what he would do if his job of assembling kits was no longer available to him, he had a straight-forward answer: “Whatever they want me to do.”

—With assistance from Christine Pulfrey and Jasmine Han.