Thousands of unionized graduate student workers at Harvard University went on strike in December after a last-ditch collective bargaining session failed to produce an agreement. The student workers are under pressure to secure an agreement before possibly losing federal labor protections.
Photographer: Victor J. Blue/Bloomberg via Getty Images

The NLRB collected public input on its proposed rule to exclude students who work at private colleges in connection with their studies from the National Labor Relations Act, the federal law that provides private-sector employees with organizing rights and legal protections. The comment period closed Jan. 15; the board is accepting responses to those comments until Feb. 28.

Student assistants have gained, lost, and regained the right to unionize over the course of three NLRB decisions since 2000, culminating in the board’s 2016 Columbia University ruling. The board turned to rulemaking after unions pulled pending cases, denying the Republican majority a vehicle to change policy once again. The NLRB said it’s developing a regulation on student unionization to bring stability to an area of the law that has frequently flip-flopped.

Setting student assistants’ employee status under the NLRA through formal rulemaking rather than individual case adjudication would create a more durable legal standard. It also requires the NLRB to weigh a broader array of evidence, including empirical research and data that opponents of the board’s proposal say undermines its rationales.

Federal law calls on agencies like the NLRB to offer reasoned explanations for changing their rules and address why evidence supporting current rules should be disregarded. Failure to do so can doom a regulation for being arbitrary, capricious, or an abuse of power in violation of the Administrative Procedure Act.

The Trump administration has lost 66 of 70 legal challenges to agency actions as of Jan. 10, according to the Institute for Policy Integrity at the New York University School of Law. Many of those challenges were APA lawsuits.

Board Sees Threat to Academia

The NLRB said in its proposed rule in September that student assistants shouldn’t have NLRA rights because they primarily have an educational relationship with their universities. Designating them as employees would undercut their rapport with faculty, the board said.

The board primarily cites its 2004 ruling in Brown University, in which a Republican majority held that student assistants aren’t employees under the NLRA.

But several opponents of the NLRB’s proposal argued that the board has willfully ignored evidence from the long history of collective bargaining at public colleges, where state law governs labor rights.

Twelve states permit students working on campus to form unions. More than two dozen public colleges currently have student assistant unions. The first was formed in 1969 at the University of Wisconsin-Madison, although that state took away student worker collective bargaining rights in 2011. 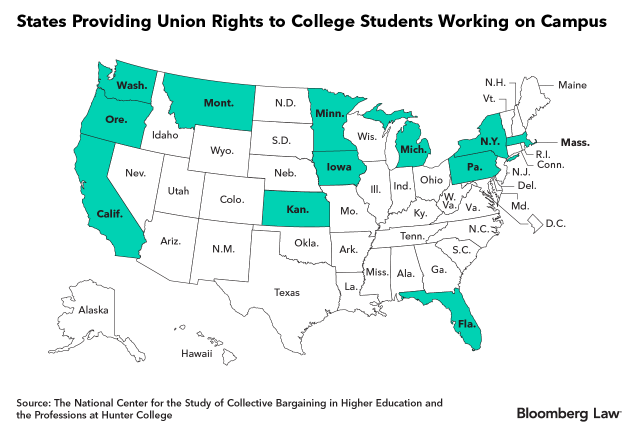 ‘Both Feasible and Successful’

“The Board’s concerns cannot be reconciled with the real-world evidence that collective bargaining at public universities has proven both feasible and successful,” the National Education Association, which represents more than 10,000 student workers, said in its comments.

A 2013 study of students at unionized and nonunionized campuses found that union recognition strengthened their working relationships with faculty and boosted the quality of their professional development, the National Employment Law Project, a pro-union worker advocacy group, said in its comments.

Attorneys general from 12 states and the District of Columbia cited a 2003 study that said fears about collective bargaining damaging the student-mentor relationship appear “foundationless.” Researchers on that study examined existing labor deals at universities and interviewed doctoral students.

Opponents of the NLRB’s proposal also pointed to collective bargaining agreements that unions have negotiated with colleges to rebut the board’s claim that unionization threatens academic freedom. Labor contracts show student worker unions haven’t demanded control over academic issues, but rather have focused on traditional workplace concerns, they said.

The National Center for the Study of Collective Bargaining in Higher Education and the Professions at Hunter College, which didn’t take a position on the NLRB’s proposal, examined 42 contracts currently in place at public and private colleges. The center found provisions addressing wages, dispute resolution, non-discrimination, and management rights in all or nearly all labor deals.

“The negotiated provisions are the clearest expression of the relationship between the institutions and the represented employees as well as the compromises inherent in collective bargaining in order to reach an agreement,” the center said. 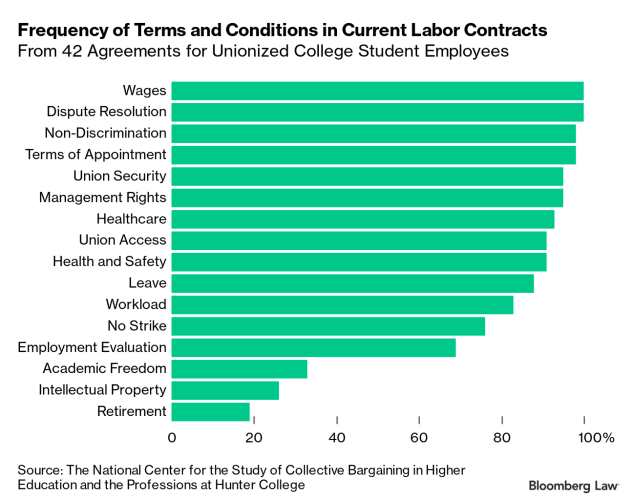 Even if student assistant unions tried to address academic issues at the bargaining table, the NLRA only allows them to negotiate over wages, hours, and other terms and conditions of employment, opponents of the NLRB’s proposal said.

But the subjects of labor negotiations are inseparable from the core educational issues governed by universities, according to a coalition of higher education groups, including the American Council on Education, Association of American Universities, and Council of Independent Colleges.

Those efforts include seeking provisions on the freedom to create syllabi and determine grades, job protections for non-native English speakers, and an affirmative action plan to select candidates for admission, the coalition said.

The false assumption that underlies the NLRB proposal is that the evidence concerning collective bargaining at public colleges isn’t relevant because the work of student assistants at private universities is substantively different, said the Association for the Study of Higher Education, an organization of higher education scholars that opposes the board’s plan.

Public and private colleges are both nonprofit entities subject to the same accreditation standards and compete in the same market for students and faculty, the association said. Universities of both types have seen the same type of restructuring of academic employment, with declines in tenure-track faculty and sharp increases in graduate assistants, adjunct professors, and non-tenure track faculty, it said.

Moreover, federal agencies that treat student assistants as employees—including the Internal Revenue Service and the Bureau of Labor Statistics—don’t differentiate between those at public and private universities, the association said.

But one important dividing line is that the source of private universities’ academic freedom is contractual, not constitutional, said the National Right to Work Legal Defense Foundation, a conservative advocacy group that supports the NLRB proposal. Imposing collective bargaining on private colleges would “upset this balance,” it said.