Exotic dancers across the country have filed hundreds of lawsuits over whether they should be considered employees, rather than contractors.
Photographer: Getty Images

Exotic dancers generally don’t get paychecks. They pick up cash thrown on the stage and pocket tips from private dances.

Out of those earnings, they then pay fees to the club owner for stage time; cuts to disc jockeys, doormen, and managers. On a busy night, at prime time, they can take home upwards of $1,500. On slow nights, the fees can leave them in the red.

And they’re not guaranteed anything. They have no rights to minimum wage or overtime. They can’t sue for sexual harassment or discrimination, or form a union. That’s because the strip club business is typically built on classifying its workers as contractors rather than employees.

Hundreds of dancers have sought to change this model, outlined in a surging number of lawsuits in recent years. The cases—filed at a rate of one every four days so far this year—argue such common practices leave workers vulnerable to exploitation and wage theft. While few cases have made it to trial, dancers have won most of those that went that far, and at least three appeals courts covering states populated by millions of Americans have ruled that clubs violate wage and hour laws by treating dancers as contractors.

Despite those rulings and an onslaught of new litigation, club owners—and even some dancers—resist change. The industry built itself around the contractor model, long before gig companies, such as and inflamed debate over the practice.

“We have dancers with some striking stories to tell, about how they were abused and exploited by the clubs,” said Shannon Liss-Riordan, an attorney who has represented more than a dozen classes of dancers over the years. She said club owners “say it’s good for the workers to not have employee status. They spread misinformation that they are somehow better off without labor protections, but it just helps their bottom line.” 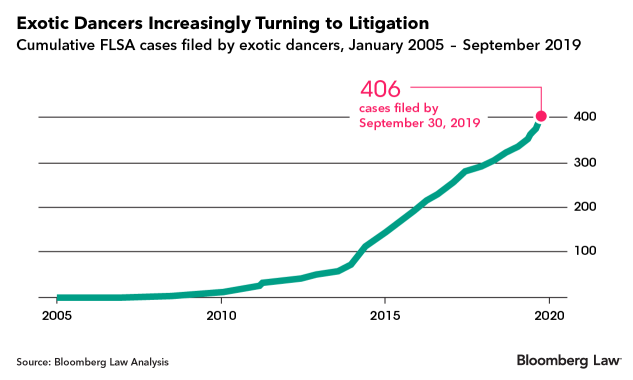 A Bloomberg Law review of federal district court data found 406 wage-and-hour lawsuits filed by exotic dancers from 2005 to the end of September 2019. An analysis of the lawsuits show that:

Antonia Crane, who has danced in strip clubs for 26 years, is part of group, Soldiers of Pole, pushing to unionize in California’s exotic dancers. She said strippers are often taken advantage of by managers who skim their pay or make them sign contracts that eliminate rights.

“It’s hard to get inside that DNA and shift it,” Crane said."We want to get the message out: You have more power than you think. Without dancers, there is no strip club.”

There are parallels between the strip-club business model and ride-share companies, and it will continue to be relevant as the number of contractors in the U.S. rises, according to a recent paper in the the William & Mary Journal of Women and the Law. It argues clubs and other companies use “individual entrepreneurship” to shift their business expenses to workers.

“Exotic dancers are emblematic of the larger problem of the misclassification of workers,” said David Weil, former administrator of the U.S. Department of Labor’s Wage and Hour Division during the Obama administration. “It is built into the business model of anyone in that business to treat dancers in that way.”

Bloomberg Law’s analysis shows many clubs build in layers of protective measures to keep claims out of court. This includes cases in which a plaintiff dropped a case after attempting to serve the business multiple times; several in which clubs did not respond to requests to arbitrate; and others that stalled when clubs filed for bankruptcy in the middle of litigation.

The result is a limited amount of precedent establishing whether dancers can be contractors. Much of the precedent that does exist has favored dancers.

The U.S. Court of Appeals for the Third Circuit in September became the latest appeals court to address the issue, upholding a $4.5 million jury verdict in favor of workers who were labeled contractors. Rulings by the Fourth Circuit in 2016 and the Fifth Circuit in 1993 also established that dancers should be employees. The Ninth Circuit recently revived a case from a lower federal court.

The outcome of the cases tend to be pro-worker, but the cases also require individual assessments, said Seyfarth Shaw partner Gerald Maatman, an attorney in Chicago who represents companies. He said many defenses would allow the businesses to operate with a contractor model.

Unlike other industries, the strip club business has a wide variation in sophistication when it comes to the independent contractor or employee arrangement and also ranges widely from small businesses to large corporations, he said.

Low opt-in rates by the dancers for the collective action lawsuits lead to repeat lawsuits, which could be a result of a high number of immigrants who work in the industry, Maatman said. He agreed that companies approach the settlements as a cost of doing business, rather than changing their worker classification or job descriptions.

“This particular industry’s adherence to an independent contractor model has spiked lawsuits over and over, but by and large, there hasn’t been a lesson learned,” Maatman said.

Justin Swartz, a partner in New York with Outten & Golden who has represented classes of dancers for 10 years, called the industry “uniform and quite stubborn.”

“When they settle a case, they pay cents on the dollar,” he said. “It’s so lucrative to violate the law, they continue to do that, even if they pay another settlement.” 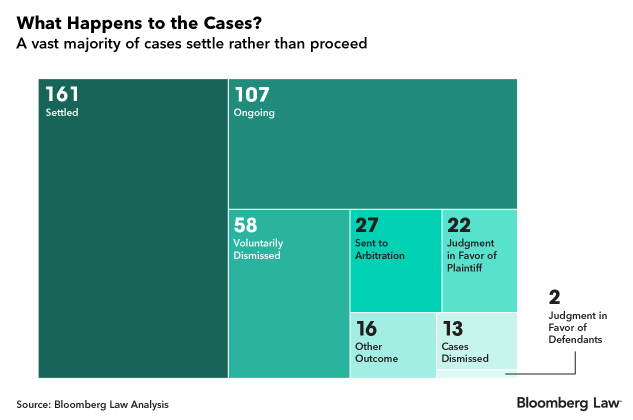 Utilizing independent contractors for clubs is “a solid business model,” but many clubs run into trouble by imposing too many rules and limits on the workers, said Greg Flaig, a consultant with the Excellence Group who advises clubs on how to comply with employment laws. Flaig said managers can’t call dancers contractors and then tell them how much to charge for dances or when to show up for work. “Then they become employees,” Flaig said. “And then these owners deserve what they get.”

The only things clubs can control if their dancers are independent contractors is when they lease space to a dancer and how much they charge for the dancer to practice their craft, Flaig said.

“We never talk about anything besides we have space or we don’t have space,” the Ohio-based consultant said. “We never get specific. We never say you have to come in. We never use the word ‘work.’”

California recently enacted legislation that outlines rigid guidelines for employers that label their workforce as contractors. Some clubs have changed their models as a result and more may follow.

Deja Vu Services, the largest U.S. strip club chain with roughly 200 clubs in more than 40 states, has faced muliple classification lawsuits over the years. As part of a settlement, it changed the business model for its 35 clubs in California to classify dancers as employees.

Yet, the company does not plan to convert the status in other states where it operates, said Ryan Carlson, director of operations at Deja Vu Services

“If we tried to convert, none of our competitors will and the dancers will just go to those locations,” he said.

Kelly Jacobs, who dances at Deja Vu in Hollywood, said she preferred the contractor arrangement. She estimates her overall pay is down 30 to 60 percent since her club changed its model, and sheneeded to take a job at another club to make up the difference..

“I know that’s good money, but not when you get naked for strangers,” said Jacobs, who has been dancing for about nine years and is part of the Independent Entertainer Coalition.

The clubs in California lost about 30 percent of their entertainers, and two locations closed this year as a result of the classification change, Carlson said. He said he can’t schedule as many dancers as he could when they were contractors, and he can no longer allow them to work more than 40 hours without paying overtime.

“There is just some sad economic realities with employee status,” Carlson said. “Our philosophy is you, as a dancer, can make as much money as possible and be successful.” 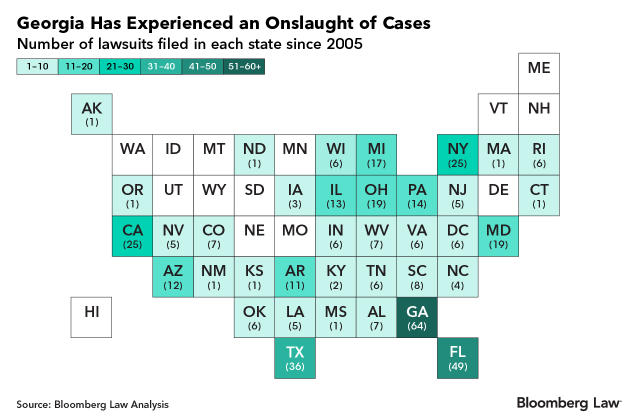 Built Into the Business Model

Crane is skeptical that courts will change how clubs label their workers. She’s never actively pressed a lawsuit, but she said she once signed an opt-in form in litigation against a club she worked at a couple of times. She said she had $8 in her bank account when she received a check for $3,500 in the mail as part of the settlement.

She saw it as a temporary boon, not a long-term solution.

In 1997, Crane was part of a union at the Lusty Lady in San Francisco. The Exotic Dancers Union, Local 790, joined the Service Employees International Union in 1995. It was possible to create a union at that time because clubs labeled workers as employees, as opposed to the current industry standard.

“We live in a different world now,” Crane said. “We live in a cultural climate that is stigmatized against the sex industry. People who are lobbying would like you to believe we’re in innovative times, but there is nothing innovative about stealing from employees.”