The number of states that have enacted $15 hourly wage floors has doubled so far this year. And advocates pushing to raise the minimum wage have scored smaller victories elsewhere.

Connecticut will become the seventh state to enact the pay standard that supporters call a “living wage.” Legislation to increase the state’s minimum to $15 by 2023 is awaiting action by Gov. Ned Lamont (D), who has promised to sign it. The state’s current minimum wage is $10.10.

The Constitution State will join California, Illinois, Maryland, Massachusetts, New Jersey, and New York, as well as D.C., as the first wave of states to pass laws requiring a $15 minimum wage be in place by 2025 or earlier.

Momentum for pursuing a higher base pay rate remains strong as state legislatures wrap up their 2019 sessions and look ahead to 2020. The lead-up to the presidential election might spur more national discussion, while states look likely to host legislative action on minimum wage for at least another 18 months.

In Florida, for example, a citizen petition seeks to place a $15 minimum wage plan on the 2020 ballot. In Virginia, state senators earlier this year narrowly rejected a $15 wage proposal that could resurface and would find support from the state’s Democratic governor, .

The issue “isn’t going away unless federal policy changes,” said David Cooper, a senior analyst for the Economic Policy Institute, which advocates for minimum wage increases. “There’s a lot of pent-up demand for stronger wages.”

While the Democratic-controlled U.S. House has federal minimum wage legislation ready for consideration, Cooper predicted it has little chance of winning majority support in the Senate or from the White House, which remain under GOP control at least through the 2020 elections. Labor Secretary Alexander Acosta said May 1 that he does not support raising the federal minimum wage.

Years of stagnant wage growth, the social effects of the Fight for $15 coalition’s activism, and a shift in many economists’ thinking about the effects of minimum wage increases have combined to help spur more states and local jurisdictions to adjust their wage laws, Cooper said.

Illinois, Maryland, New Jersey on Board

The year began with $15 minimum wage laws on the books in three states—California, Massachusetts, and New York—plus the District of Columbia.

That list quickly expanded as Illinois, Maryland, and New Jersey enacted similar legislation in February and March. New Jersey’s wage floor is set to hit $15 per hour by 2024 for most employers, while Illinois and Maryland will see their minimum wage rise to that level in 2025.

Even the earlier adopters are still working through multiyear phase-ins of the $15 requirement. D.C. currently has the highest minimum wage among states and U.S. territories, at $13.25 per hour. A small handful of cities already require most employers within their jurisdiction to pay a minimum of $15 per hour, including San Francisco and Berkeley, Calif. 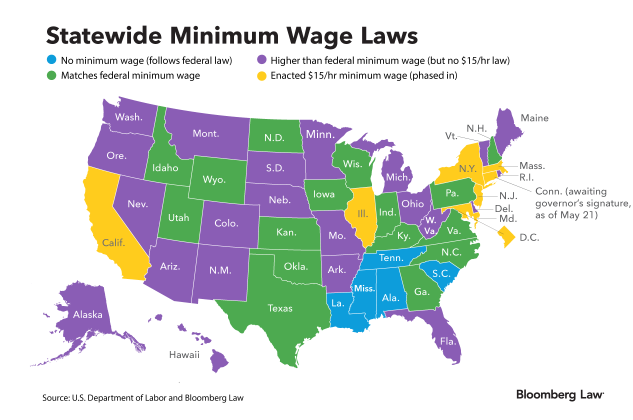 The seven states and one federal district with $15 minimum wage laws account for a little more than 30 percent of the U.S. workforce, according to the National Employment Law Project, which also advocates for minimum wage increases.

“When fast-food workers walked off the job nearly seven years ago demanding $15 and a Union, nobody thought we had a chance,” said Joseph Franklin, a McDonald’s worker in Hartford, Conn., via written statement distributed by the Fight for $15 campaign on May 17. “Now, Connecticut is on the verge of becoming the seventh state to pass a $15 minimum wage, and the fourth this year. Our movement is gaining momentum.”

But that view is not uniform. Small business advocates such as the National Federation of Independent Business say the mandated labor-cost increases will stunt economic growth and cause job losses.

“Often the people that get crowded out of the workforce when you see wage increases” are younger and less-skilled workers, said Christopher Carlozzi, NFIB’s state director for Massachusetts. He said he’s already hearing reports of Boston-area restaurants closing and cutting workers’ hours since the state passed its wage increase last year.

“You’re already seeing almost immediately, even at $12 an hour, some small businesses saying we can’t afford this,” he said, noting the state enacted new paid leave requirements for employers at the same time. The state’s minimum wage rose to $12 an hour in January on its way to $15 by 2023.

Restaurants and retailers tend to be hit hard by wage increases, as well as landscaping services, amusement businesses such as skating rinks, and other small businesses, Carlozzi said.

While the $15 minimum wage proposals have grabbed the most attention, a number of states have made smaller moves requiring employers to pay more.

New Mexico enacted a wage law in April that will gradually raise the wage floor to $12 by 2023, up from the current minimum of $7.50.

In Arkansas and Missouri, voters approved proposals on their November 2018 ballots to increase their statewide minimum wages—to $11 by 2021 in Arkansas and to $12 by 2023 in Missouri.

In Colorado, the state Legislature repealed a law this spring that blocked cities and counties from mandating minimum wages for local employers. Gov. (D) is expected to sign the legislative measure.

Proposed wage hikes also are pending in the waning days of Vermont’s and New Hampshire’s legislative sessions, although the Republican governors in those states are expected to veto the bills if they reach their desks. A bill to raise Nevada’s minimum wage gradually to $12 is pending as well.

In Wisconsin and Virginia, Democratic governors have voiced support for minimum wage increases, but the proposals so far have been blocked by Republican-controlled legislatures. The Virginia Senate voted down a plan to raise the statewide minimum to $15 on a party-line vote of 21-19.

A campaign pushing for Hawaii to raise its minimum wage is setting an even higher goal—possibly $17 an hour—as inflation continues to chip away at what can be considered a living wage, Cooper said.

“There’s going to continue to be action at the state level,” he said. And in states where the legislature doesn’t support a minimum wage increase, voters could pursue it through a ballot initiative as happened in several states in 2016 and 2018, he added.

Florida could join that list. A petition drive headed by Orlando attorney John Morgan is underway, proposing a constitutional amendment on the 2020 ballot that would gradually increase the Sunshine State’s wage floor to $15 over six years. Morgan led a successful ballot initiative to legalize medical marijuana in Florida in 2016.

—With reporting by Andrew Ballard in Raleigh, N.C., Tripp Baltz in Denver, Brenna Goth in Phoenix, and Aaron Nicodemus in Boston.