A "Now Hiring" sign outside a business in Lithonia, Ga., on April 26.
Photographer: Elijah Nouvelage/Bloomberg via Getty Images

Federal jobless benefits for gig workers and the extra $300 a week in unemployment aid will end earlier than scheduled in Arkansas, Montana, and South Carolina—possible signs of what’s to come as governors respond to employers’ complaints that they can’t hire enough workers.

Arkansas Gov. Asa Hutchinson (R) announced Friday his state would stop participating in the enhanced federal jobless benefits by the end of June, following similar moves this week by the Republican governors of Montana and South Carolina.

The governors opted to end the benefits three months earlier than their expiration under the latest federal pandemic relief legislation. Meanwhile, Arizona and Florida are preparing to resume work-search requirements for unemployment aid recipients later this month.

Business groups say these moves will help push hourly workers back into the workforce as restaurants and hotels struggle to attract applicants. More states could follow suit, answering a call from the U.S. Chamber of Commerce to end the extra $300 weekly unemployment benefit in response to weaker-than-expected April job growth numbers released Friday.

“We need a comprehensive approach to dealing with our workforce issues and the very real threat unfilled positions poses to our economic recovery from the pandemic,” Neil Bradley, the chamber’s chief policy officer, said Friday in a statement. “Based on the Chamber’s analysis, the $300 benefit results in approximately one in four recipients taking home more in unemployment than they earned working.”

But progressive economists and worker advocates say ending enhanced benefits now will cut off a lifeline for people who remain unemployed because of health concerns related to Covid-19 and a shortage of available child care—particularly hurting women and people of color, who are unemployed at rates that exceed the average.

“It’s hard to make sense of the Chamber’s call for slashing unemployment benefits,” said Indivar Dutta-Gupta, co-executive director at the Georgetown Center on Poverty and Inequality. The elevated unemployment rate, labor force growth, and higher-than-average job growth in low-paying service industries all “strongly suggest the Chamber’s diagnosis is unfounded and its suggested treatment is ill-advised,” he added.

South Carolina Gov. (R) on Thursday announced his decision to halt participation in the federally funded benefits, effective June 30, saying the federal programs launched last year were intended only to be “short-term financial assistance” at the height of the pandemic.

Montana Gov. (R) unveiled a similar plan on Tuesday, while also rolling out a $1,200 “return to work bonus” for unemployed people who take a job.

“The evidence suggests that challenge is likely related to caregiving and public health concerns,” he said. “If unemployment benefits were a challenge for hiring, we simply wouldn’t see the patterns we’re seeing.” 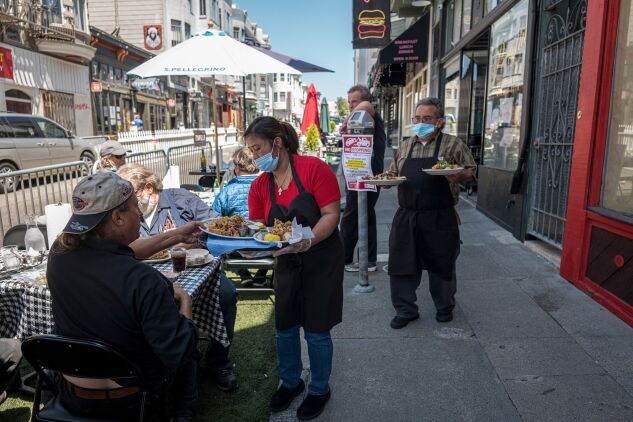 Across South Carolina, restaurants and hotels are “really hurting” as they struggle to hire enough people to fully reopen, with customer demand and tourism returning, said Douglas O’Flaherty, vice president of operations for the South Carolina Restaurant & Lodging Association.

One Hardees franchisee, for example, can’t reopen their dining rooms after months of offering drive-through service only, because they can’t hire enough workers to staff the front counter, he said. Restaurants in Columbia, S.C., alone had nearly 1,000 entry-level jobs listed on a job search website as of Friday morning, O’Flaherty said. They offered pay ranging from $8 an hour to $20 an hour with a $400 signing bonus.

Unemployment benefits don’t bear the full blame for difficulty in hiring, O’Flaherty said, but he estimated they’re part of the problem. People understandably might be uneasy about the health risks of working in close quarters during the pandemic, he said, while also noting some previously laid-off or furloughed restaurant workers likely found jobs in other industries that might be less vulnerable to a recession or pandemic.

Restaurants already were having difficulty hiring enough staff prior to the pandemic, he added, but “not to this extent.” He would have rated the problem a 4 out of 10 pre-pandemic, but now would give it a 12. “It’s off the charts,” he said.

The move to scale back unemployment benefits during or shortly after a recession is an unfortunate repeat of history, said Alexa Tapia, unemployment insurance campaign coordinator for the progressive National Employment Law Project.

Beyond Montana, South Carolina, and Arkansas, other states have indicated they’ll cut benefits or will soon end the flexibility provided to laid-off workers during the pandemic.

In Tennessee, legislation that’s awaiting Gov. Bill Lee’s (R) signature would reduce the duration of state-level benefits, beginning in 2023, from the current maximum of 26 weeks (a standard most states follow) to a sliding standard that can go as low as 12 weeks depending on the state’s unemployment rate. A similar proposal is being considered in Ohio, as states weigh options for shoring up their unemployment insurance trust funds following the pandemic.

The governors of Arizona and Florida have indicated their state unemployment agencies will resume enforcing work-search requirements for people receiving jobless benefits—requirements that are standard nationwide but were temporarily suspended last year in response to the pandemic.

After the financial crisis of 2007-09, Republican-led states such as Florida and North Carolina cut the duration of benefits as a way to save money and rebuild their unemployment insurance trust funds.

But research suggests that unemployment benefits are a net positive for the economy, putting money into people’s pockets and helping prevent further job losses, evictions, and an increase in poverty, Tapia said.

“For states to abruptly end their participation in the fully federally funded unemployment programs is cruel and will disproportionately harm women and black and indigenous people of color,” she said.