A sign is seen during a protest for the #MeToo movement.
Stephanie Keith/Getty Images

Seven states have taken action to restrict the use of nondisclosure agreements in cases involving sexual harassment claims in the year since allegations against Harvey Weinstein were made public.

They’re part of a dozen total states over the last year that have enacted #MeToo-related laws affecting public and private employers.

Employers in many states will have to reconsider their use of nondisclosure agreements and even mandatory arbitration clauses for claims involving sexual harassment. New training procedures is a common theme among the new state laws.

The new expectations in the state initiatives show employers they simply can’t ignore sexual harassment allegations anymore, lest they find themselves on the wrong side of the law, said Michelle Phillips, a management-side attorney in Jackson Lewis’ White Plains, N.Y., office. 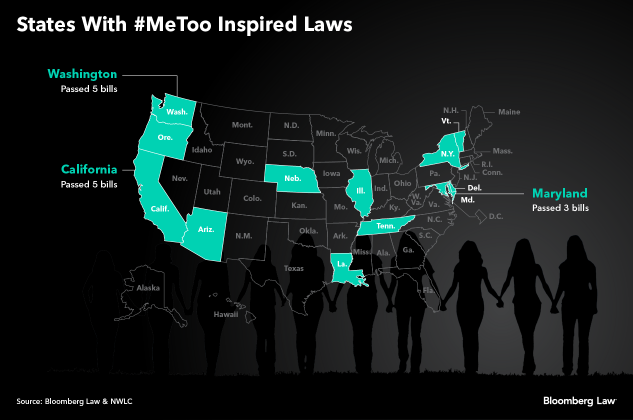 There isn’t yet a model bill circulating among the legislatures, told Bloomberg Law in September. “But Washington and New York were first out of the box passing a package of bills. A lot of states are looking to them” as possible examples to follow, she said. Martin is the vice president for education and workplace justice at the National Women’s Law Center in Washington.

And because secrecy and power imbalance has been blamed for the continued prevalence of sexual misconduct in the workplace, a significant number of state legislatures set their sights on contract clauses long used to silence alleged victims.

The use and enforcement of nondisclosure clauses in agreements to settle claims of sexual harassment are on the way out in seven states: Arizona, California, Maryland, New York, Tennessee, Vermont, and Washington.

Nondisclosure clauses generally limit the ability of a signatory to talk about the events that lead to a settlement. Worker advocates have argued that by limiting information sharing, the nondisclosure clauses have kept employees in the dark about the potential for harassment from certain co-workers or supervisors.

“If you look at the Weinstein case, for example, NDAs were a key tool used to keep these assault allegations quiet for years,” Andrea Johnson, senior counsel for state policy at NWLC, said.

Papa John’s founder John Schnatter admitted in court that he has two nondisclosure agreements in effect with two women. He was also sued in 1991 for groping a female worker.

In California, a new law reads as allowing parties to keep the dollar amount of the settlement private, but no longer allowing the underlying facts leading to the sexual harassment settlement to remain secret unless the accuser allows it, according to . Wasserman is with Littler Mendelson in Los Angeles, where she represents employers. 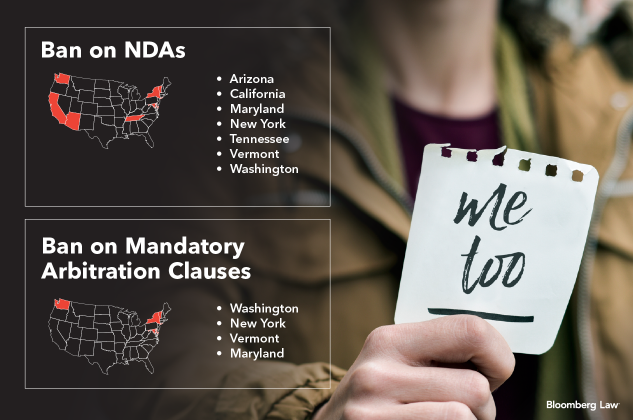 Four states that restricted NDAs—Maryland, New York, Vermont, and Washington—also took aim at the use of mandatory arbitration clauses in employment contracts for claims of workplace sexual harassment.

Limiting employers ability to force employees to arbitrate workplace-related claims gives workers the right to pursue actions in court, rather than in a private arbitration proceeding that doesn’t allow for judicial review.

California, however, isn’t one of the four states to limit the use of mandatory arbitration. Governor (D) vetoed such a bill Sept. 30, stating it would conflict with federal law.

Brown’s refusal to sign the measure isn’t completely out of left field.

The U.S. Supreme Court’s decision in May of this year in Epic Systems Corp. v. Lewis could chill the effectiveness of laws in the four states that did proceed to ban forced, private arbitration.

Most of those laws were passed earlier in the spring of 2018, before the justices handed down Epic Systems. That opinion said mandatory arbitration clauses are legal and enforceable.

As a result, the validity of the state laws attempting to carve out sexual harassment claims is an open question, Johnson, Wasserman, and Phillips each told Bloomberg Law. The state laws will likely be shaken out in court, if or when a challenge is brought either against the enforcement of a clause or as a facial challenge to the legality of the ban.

Yet even in states that passed laws in the last year, the use of nondisclosure and mandatory arbitration clauses are still valid in all circumstances other than workplace sexual misconduct.

Outside of NDAs and arbitration, most of the twelve state laws require new training and data maintenance around the issue of sexual harassment.

Seven states—California, Delaware, Louisiana, Maryland, New York, Oregon, and Vermont—have passed legislation requiring regular training. The specifics, like the minimum number of employees needed to trigger the requirement and the frequency of training, vary from state to state.

Vermont’s Department of Labor already has updated its sexual harassment advisory poster. The updated poster was posted online for employer use Sept. 15, a spokesperson for the department, told Bloomberg Law in an Oct. 1 email.

In California, employers with five or more employees will have to provide sexual harassment training.

Now that New York requires training to educate employees about the law and how to use internal and external reporting mechanisms, Phillips says it’s easy for workers to lodge complaints externally with state and federal commissions. She’s encouraging businesses to go above and beyond mere lip service to the law. “If workers walk away from a training feeling dissatisfied, they’ll go the external route, rather than creating a dialogue with their boss and HR department,” she said.

The new training and policy requirements for businesses present “both challenges and opportunities” for employers, Phillips said. While employers must take on additional burdens and expend resources to comply with the law, it’s also a chance to recommit to workplace safety and building trust with their workforce.

Wasserman and Johnson worry that the focus on sexual harassment could create a hierarchy of unacceptable behaviors, placing too much emphasis on harassment and leaving other protected groups high and dry.

For example, Johnson points out that a black woman may experience racism along with sexual harassment, and disabled women may have disability bias playing a role in the sexual harassment they endure.

“It could create a caste system for discrimination claims, if we’re not careful,” Wasserman said. She elaborated by saying that without guidance, the practical result of rushed #MeToo legislation is a sense that sexual harassment is particularly worse, and deserves more public resources, than other sorts of discrimination that is just as harmful, like racial and religious bias.

To contact the reporter on this story: in Washington at pwells@bloomberglaw.com