State workforce agencies across the country are turning to the federal government for financial and administrative support as they try to absorb the coronavirus-induced upheaval to their unemployment insurance systems.

Just as jobless claim filings soared by 70,000 to 281,000 last week, there were reports of several states’ unemployment insurance websites crashing. Other states have dangerously low trust funds that soon could be overwhelmed by benefits-seekers. Unemployment benefits filings are projected to surge to more than 2 million this week, with Ohio already reporting nearly 140,000 new claims.

The U.S. Department of Labor now has an urgent communication role to play helping states expeditiously pay benefits to what could be millions of people seeking relief after their jobs temporarily or permanently disappeared from the spread of the new coronavirus. The agency’s responsibilities expanded when the president signed into law March 18 an emergency relief package that includes up to $1 billion that DOL will transfer to state UI offices.

Dale Ziegler, who was deputy administrator of the DOL’s Office of Unemployment Insurance from 2000 to 2012, has clear advice for the DOL.

“As quickly as possible, get the directives out there with the interpretations that the states need so they can program their automated systems,” said Ziegler, who was at the core of the agency’s response to the prior UI claims boom during the Great Recession. “Bottom line is as quickly and as accurately as you can, you get that out there. The states need that information in order to make their decisions on how to move forward. Communication, communication, communication.”

It appears the agency has been heeding his recommendations.

“I’ve been amazed how responsive U.S. DOL has been able to be at this time, whether it be regional staff in Boston and Philadelphia or the national staff, getting us answers as we need them,” said Robert Asaro-Angelo, New Jersey labor commissioner. “This is a constantly evolving situation and federal bureaucracies and laws and regulations can quickly evolve over time. They’ve been giving us as much leeway as possible to give us what’s best for our state. And we’ll be working with them further.” 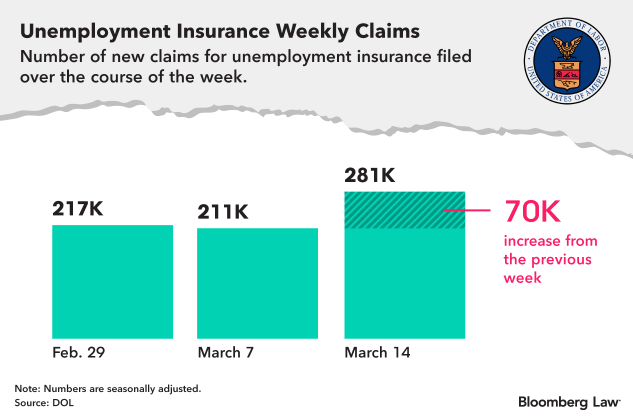 ETA Gets to Work

The DOL’s Employment and Training Administration, which houses the Office of Unemployment Insurance, issued guidance March 12 on how state agencies can extend unemployment benefits to employees who miss work because of quarantine; to those who choose not to work to care for a family member; as well as to those whose employers cease or limit operations in response to the pandemic. Much more guidance is likely on the way to address the upcoming influx of cash to support state UI offices.

“We are working closely with the states and the U.S. Department of Labor to monitor the situation and will support actions needed as we see what each new day brings,” said Michelle Marshel, director of external affairs at the National Association of State Workforce Agencies. NASWA acts as an intermediary between state governments and DOL in handling the surge in UI claims.

Washington state already has found DOL to be a valuable partner. The Washington Employment Security Department has called on DOL for support to help coronavirus-impacted employees, said Nick Demerice, a spokesman for the agency.

He noted that the department could further help his agency by publishing weekly jobless claims data on a more timely basis, rather than at a nearly one-week lag. Washington’s been in talks with DOL about potentially lifting a requirement that states don’t publish their numbers until after the ETA releases its data, or moving up the report’s release to earlier in the week.

DOL representatives didn’t respond to a request for comment.

Interactions between the ETA and the workforce association will be critical for states, said Jane Oates, who was assistant secretary at the agency for most of President Barack Obama’s first term.

Chief among those challenges when Oates was in office was helping states update their UI technology to handle the boom in new online claimants. A decade later, those difficulties will remain in certain states, especially those with budget shortfalls and staffing shortages.

Not-too-distant memories of skyrocketing unemployment benefits claims filed during the 2008-2010 recession should help inform the DOL response to coronavirus-related claims at the state level, some former DOL officials said.

“There was a recognition that something severe could happen again, so at that point the UI office at the federal level and the state levels were working really hard to be prepared if you had another downturn,” said Eric Seleznow, a deputy assistant secretary at the ETA during the Obama administration. That included efforts to establish or enhance states’ short-time compensation programs, which about half the states have.

Also known as work sharing, short-time compensation allows employers to use state funding to avoid layoffs during a business downturn by reducing the work hours of a group of employees, who then receive prorated unemployment benefits.

Gerri Fiala, an independent consultant on workforce development who was a longtime senior career official at the ETA, also had flashbacks to the 2008 recession.

“You think back to what happened in the Recovery Act where we talked about modernization and the different policies and eligibility qualifications, and changes in benefits—all of that has to be defined at the state level within the guidance provided” by DOL, said Fiala, who worked at the agency under four presidents. That may require much more individualized follow-up communication with the states, catered to their state-specific UI policies, Fiala said.

But there’s also a recognition that the current climate is unprecedented.

“I think one of the biggest differences with this crisis is it’s going to come on even faster than it did in 2008. We’re going to see huge spikes in first-time applications,” said Brent Orrell, who was acting head of the ETA at the tail end of the George W. Bush administration. “I think that ETA has been doing what it can with existing authority in terms of signaling to the states that all the waiver authority that we’ve got is available to you.”