States are enacting pay equity laws, but similar success has yet to be seen at the federal level.
Photographer: Molly Riley/AFP/Getty Images

Legislation to address pay equity and discrimination continues to see more success in states than at the federal level, creating a patchwork system that’s difficult for employers to navigate.

This year alone, laws addressing wage discrimination will take effect in 11 states. Alabama’s first law on the books banning pay discrimination based on race and sex and prohibiting employers from refusing to interview or hire someone who declines to share salary history goes live Aug. 1. Maine, Nebraska, New York, and Maryland will implement similar laws before the end of 2019, joining states like California, Connecticut, Hawaii, Illinois, Wyoming, and Washington that established pay protections earlier this year.

The new state measures often feature a ban on salary history questions in job applications, aimed at ending the perpetuation of lower salaries for women and minorities. Some also include stiff employer penalties for violations, expand the classes of protected workers by including categories such as gender identity or marital status, or shield employees who share compensation information with coworkers.

The state actions come as the chances of an enhanced pay equity law at the federal level remain slim—despite the attention the issue received from the U.S. women’s soccer team’s march to the World Cup championship in July.

The federal Equal Pay Act has barred sex discrimination in pay since 1963, but the law has loopholes for employers to avoid liability, worker advocates say. The GOP-controlled Senate, however, is unlikely to pass legislation aimed at amending the law. With states taking the lead on the issue, some employers gripe about the challenges of complying with different requirements across the nation.

This patchwork system of equal pay laws can be difficult for employers with locations in several cities and states, said , a partner in the labor and employment practice of Haynes and Boone.

“Generally what I advise clients is to take the most liberal approach, to look at the most restrictive laws in jurisdictions where they have employees and make sure they are in compliance with the most employee friendly states,” Habinsky said.

At the federal level, the Paycheck Fairness Act (H.R. 7) was offered in the House in January. It would amend the Fair Labor Standards Act, which incorporates the Equal Pay Act, to prohibit employers from paying different amounts to individuals in similarly situated job titles, unless warranted by “bona fide job-related factors.” The bill, first introduced in the 1990s, also would change existing law by letting women alleging pay bias to sue for compensatory or punitive damages, and limiting the use of salary histories to set workers’ pay.

Before the House voted on the Paycheck Fairness Act, the U.S. Chamber of Commerce drafted a letter to House members urging a no vote. The chamber said the bill would “effectively eliminate the ability of an employer to make compensation decisions.”

“As a result, employees will not be compensated based on the attributes they bring to the job and their actual contributions to their employer,” it said.

The chamber said it opposes pay discrimination and supports equal employment opportunity and strong enforcement of the Equal Pay Act and Title VII of the Civil Rights Act of 1964, rather than developing a legislative alternative.

The bill cleared the House in March and has since stalled in the Senate. Rep. (D-Conn.), a lead sponsor of the bill, puts the blame on Senate Majority Leader (R-Ky.). “It is at his door,” she said. “He remains the main obstacle keeping women from getting equal pay for equal work, and that is shameful.”

A representative for McConnell didn’t respond to a request for comment.

Democrats continue to introduce other pay equity legislation in the House and Senate. Earlier this month, Sens. (Calif.) and (Wash.) introduced the Athletics Fair Pay Act (S. 2083), which would require equal pay and compensation for all Olympic and amateur athletes. A House version was introduced July 17. This followed Sen. (W.Va.) proposal that would prevent any federal funds from being used toward the 2026 World Cup until the U.S. Soccer Federation agrees to pay men’s and women’s national teams equally.

The issue is also getting attention on the presidential campaign trail. Sen. (D-Calif.) was the first Democratic presidential candidate to introduce an equal pay proposal. It would require companies with 100 or more employees to obtain an “Equal Pay Certification” and prove they’re not paying women less than men for work of equal value or else face a fine. 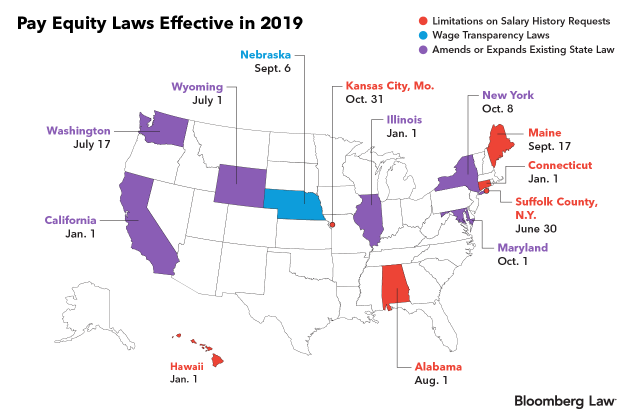 Many State Laws, Some With Teeth

Among states, all but one have pay equity laws, and their specific provisions vary.

“Every state has something on the books regarding pay equity, except Mississippi,” Andrea Johnson, senior counsel for state policy for the National Women’s Law Center, said. “But they’re all different strengths.”

State and local measures help close the wage gap and even the playing field at work, but the goal is still to get a stronger federal standard, Johnson said. The wage gap typically translates into more than $10,000 per year in lost earnings for women, according to the NWLC.

Bans on salary history questions have been enacted by at least 18 states. “Salary history laws have caught on because they’re so popular with the public. Gender aside, most people can relate to taking a job where they felt underpaid and worrying that it will hurt them in the future,” Dori Goldstein, a Bloomberg Law legal analyst, said.

Alabama’s new pay equity law allows an employee to bring a private lawsuit for reimbursement of lost wages if pay inequality is discovered. It also prohibits employers from retaliating against applicants and workers who don’t disclose their wage history.

In Virginia, as of July 1, job applications can no longer ask for salary history, school name, age indicators, or other information with the potential to lead to unconscious bias.
New York Gov. (D) signed into law a bill July 10 that requires employers to give workers equal pay for similar work and bars them from paying less based on an expanded list of protected statuses, including national origin, gender identity and expression, military status, disability, and marital or family status. The law is effective Oct. 8.

Employers Look to Get Ahead of Laws

Some employers are trying to get ahead of state wage measures, Goldstein said. “One side effect of these laws is that employers are doing away with salary history questions even when there isn’t a state or local law requiring them to. Adjusting an interview question is a lot easier than staying on top in an increasingly complex patchwork of laws,” she said. “Now, employers are asking, ‘What are your salary expectations?’”

She added: “While there has been some pushback on the employer side, it hasn’t been nearly as much as we’ve seen with other worker protections laws, like minimum wage increases and scheduling laws. This is probably because it’s relatively cheap and easy for employers to comply.”

(Updated to include map of pay equity laws.)