The handful of state workplace anti-discrimination agencies that have received consistent cash infusions are better able to tackle workloads and branch out into new areas, while others—including the federal US Equal Employment Opportunity Commission—have been hamstrung by stagnant funding.

Bigger budgets allow state agency leaders to think about how they can explore novel areas of the law, incorporate technology into daily operations, and stay on top of complaint backlogs—lofty goals that other agencies working with smaller budgets, limited staff, and the constant inflow of discrimination complaints likely struggle to achieve.

People living in states with underfunded nondiscrimination agencies may face longer wait times for claims to be resolved and could be less likely to get an in-depth investigation, attorneys say.

“The faster the process works, the better for all sides,” said Daniel Klein, a partner with Seyfarth Shaw LLP in Boston who represents employers in workplace matters.

Anti-bias agencies in left-leaning states like Massachusetts are more often the beneficiaries of consistent funding. Following a WBUR and Boston Globe investigation that revealed complaint delays of sometimes over a decade, the Massachusetts state legislature increased the budget for the Massachusetts Commission Against Discrimination by 78% in fiscal year 2023.

Other states, however, haven’t been as generous. Texas, for example—the second most populated state, with over 29 million people—most recently allocated just $1.3 million to its state anti-bias agency, as compared to Massachusetts’ $7.6 million.

“When you consider the volume of claims that are filed in Texas compared to other states, you would expect there to be more support for the agencies,” said Tiffany Cox Stacy, a San Antonio-based attorney at Ogletree, Deakins, Nash, Smoak & Stewart, P.C.

The EEOC’s budget has increased by over $40 million since 2019, and the agency has said it’s used those funds to increase staffing in the field. The agency’s budget for next year is still not finalized, though President Joe Biden requested $464.7 million for the agency. 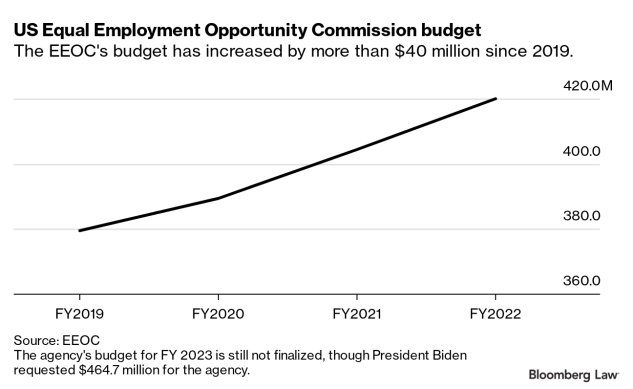 State agencies with larger budgets can do more than just keep up with the bare minimum—they can model what can be achieved at the state level, by testing the existing boundaries of the law, proactively reaching out to more workers, and turning to technology to aid anti-bias efforts. And in many states with more robust budgets, new state worker protections are routinely added to the books, expanding the kinds of bias complaints they may field.

California is the most populated state in the country, and the budget for its workplace anti-discrimination agency has increased consistently for the last several years, most recently increasing 26.3% from fiscal year 2021 to 2022. But in 2013, the California Senate Office of Oversight and Outcomes labeled the agency “critically underfunded.”

Since then, there have been “demonstrable effects” of the larger budget appropriated by the state legislature, according to Kevin Kish, the agency’s director. Some of that can be seen in the litigation the agency has taken on.

Formerly known as the California Department of Fair Employment and Housing and recently renamed the California Civil Rights Department, the agency is known for its litigation against high-profile companies, a feat foreign to many other state agencies. Riot Games Inc., a well-known video game developer, agreed to pay $100 million to settle a class action brought by the Civil Rights Department, and the agency is actively testing novel legal claims, like the lawsuit alleging caste bias at

The Illinois Department of Human Rights, another agency whose funding comes from a state legislature controlled by Democrats, has also seen its budget increase consistently, with a 31.6% increase from fiscal 2022 to 2023. James Bennett, the agency’s director, said the funding boost will allow them to hire more investigators and expand the outreach program.

“This will be the first year we’ll be able to bring in investigators at the level that we’re supposed to have,” he said. Continuing to expand the agency’s information technology is another priority of his. He equated a recently replaced case management system—which hadn’t been updated in more than two decades—to something out of the popular television show “Stranger Things,” which is set in the 1980s.

If more funding for the Illinois state agency means more expeditiously processed charges, “that has a huge upside for employers,” according to David Weldon, of counsel with Barnes & Thornburg LLP in Chicago. But more funding could also mean more enforcement and investigations, which is “not good news.”

Worker protections in states with Democrats setting the legislative agenda are also multiplying, meaning complaints may be filed with the state or local agencies rather than the federal EEOC.

In New York, for example, a plaintiff may bring a claim in a state or city agency because state laws there grant more protections, it’s easier to maneuver without a lawyer, and those agencies can offer immediate adjudication, while the EEOC is more of an administrative step before going to court.

That plaintiffs’ strategy results in a busier caseload in the state and city, according to Jason Habinsky, chair of Haynes and Boone LLP’s labor and employment practice group. At both the state and federal level, it’s clear when agencies are cash-strapped, he added. “The investigation looks different based on how busy the agency is and what their staffing is like.”

The New York Division of Human Rights budget increased by more than $2 million from fiscal 2022 to 2023, and the investment will allow the agency to hire new staff, an agency spokesperson said in an email.

“This fall, the Division will pilot a process that will expedite cases in the investigative stage so they can be resolved more efficiently,” the spokesperson said. “We are committed to ensuring that every New Yorker who files a discrimination complaint with the Division receives a result that is swift, just and holds those who violate the law accountable for their actions.” 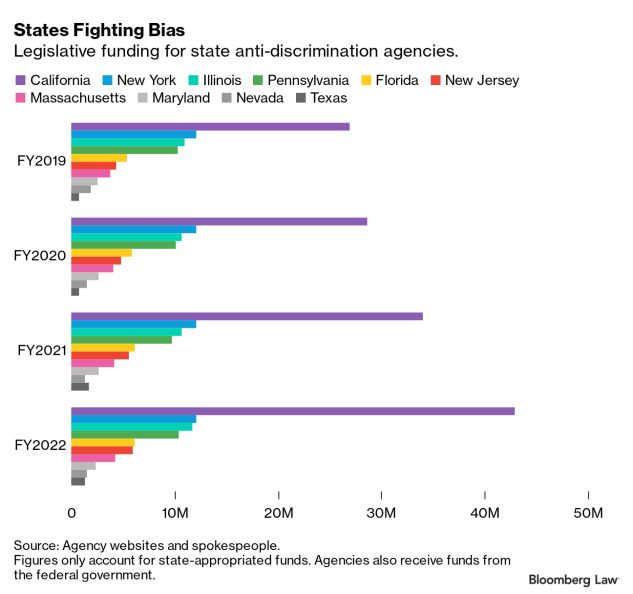 ‘Work With What We Have’

For state agencies with less funding, goals are more pragmatic.

“I realize that with more money, you have more opportunities to grow a program—we’re not complaining, we just work with what we have,” said Nevada Equal Rights Commission administrator Kara Jenkins. She said other streams of funding—like federal dollars granted through last year’s American Rescue Plan Act—allowed Jenkins to recently upgrade the agency’s case management system to streamline complaint processing.

Nevada’s budget is diminutive compared to other states, but its population is also smaller, clocking in at just over 3 million people statewide.

The Texas Workforce Commission’s Civil Rights Division, on the other hand, has a low budget for a state its size, standing at less than half of the budgets in states like New Jersey or Florida.

With few exceptions, Texas state laws protecting employees from workplace discrimination largely mirror federal protections. That means the vast majority of discrimination claims are filed in the federal forum, according to Cox Stacy of Ogletree Deakins.

“Other states have significantly more favorable laws than what is provided at the federal level, and that might be why you see more aggressive action by the state agencies in those states,” she said. More EEOC charges are filed in Texas than any other state, with the state accounting for over 10% of the agency’s total caseload in FY 2020.

Resolving a case in Texas doesn’t happen quickly, Cox Stacy said, noting it takes between six months to a year to even begin talk of mediation.

In Nevada, if more money was sent to the state’s anti-bias agency, Jenkins said she’d focus on more outreach.

“More of a presence is always a good thing in my opinion, so that people know that you’re there,” she said. “More money would expand our reach.”