Immigrants make up an outsized share of entrepreneurs in the U.S. But some groups warn the country is losing out on foreign talent because of outdated immigration policies.

As lawmakers have spent the past decade discussing, but not enacting, a new special visa classification for startup founders, more than two dozen other countries have created such visas for entrepreneurs.

Now, business groups ringing alarm bells over the U.S. falling behind are targeting a $250 billion China competition bill that would make investments in semiconductor manufacturing and supply chain resilience as a pathway to enact the visas and retain startup founders.

The absence of a comparable U.S. option has hemmed in business founders like Nishat Rustagi, who launched a digital manufacturing and 3D printing firm called Make Inc. after graduating from University of California San Diego in 2017.

Rustagi, a native of India, developed the company while using a program called Optional Practical Training, which lets science, technology, engineering, and math graduates on student visas work in the U.S. for up to three years after graduation. But faced with uncertainty over obtaining a new visa, he decided to relocate to New Delhi last year, where he continues to work with American firms remotely.

That poses big challenges, even in the Zoom era, he said. A lot of business-to-business commerce “still happens in person. You have to show up.” 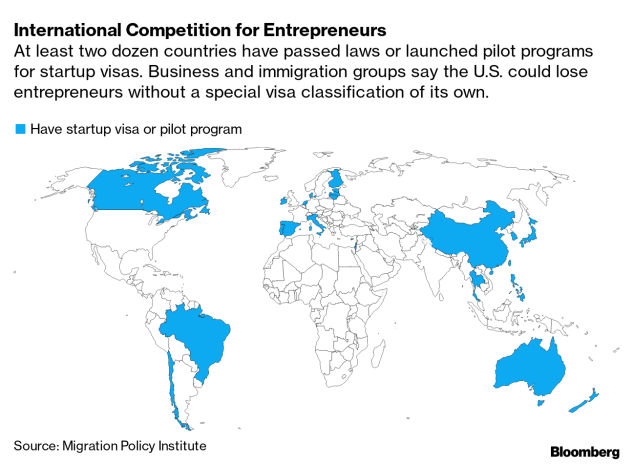 “I have to work completely opposite hours in India to match California hours,” Rustagi added. “I work from 7 pm to 6 am in the morning India time. This is hard to scale and sustain.”

Immigrants account for a quarter of new startups and patents in the U.S. each year. The country remains the top choice for immigrant entrepreneurs, said John Lettieri, president and CEO of the Economic Innovation Group.

“The only thing standing in the way is bad public policy,” he said.

Projections of job creation fueled by new legal options for immigrant founders range widely depending on the kind of visa requirements adopted.

The China competition bill passed by the House last month () included new visa classifications for startup founders and key employees as well as exemptions to annual green card caps for graduates of American colleges with doctors in science and engineering fields. Those provisions weren’t part of the research and competitiveness package that cleared the Senate () last year, but advocates for the startup visa are making a full court press to make sure it’s included in conference legislation negotiated by both chambers.

“This could be a key pillar in making our country competitive, along with solving chip shortages,” said Jeff Farrah, general counsel at the National Venture Capital Association. “Those things all go together from our perspective.”

Rustagi said his firm could be part of boosting American competitiveness. 3D printing is “part of the next wave that could bring manufacturing back to the U.S.,” he said.

Since lawmakers began debating startup visas more than a decade ago, countries including the United Kingdom, Australia, Canada, and Chile have launched their own programs for entrepreneurs.

“America has been relying on the success we’ve had over past decades,” said Tahmina Watson, an immigration attorney at Watson Law. “These other countries are rolling out the red carpet.”

Jorge Loweree, policy director at the American Immigration Council, noted that many international students—including would be entrepreneurs—are educated in the U.S. but are then offered no path to permanent status.

“We’re bringing in people from abroad to learn at our universities and we’re forcing them ultimately to leave,” he said. “The system doesn’t operate in a way that suits our interests.”

The options for immigrants looking to start businesses in the U.S. remain limited even after the Obama administration issued the 2017 rule allowing them to stay in the country for up to five years through the parole option.

Immigration advocates say that rule was a step in the right direction, but comes with its own drawbacks such as murky timelines for approval and less overall certainty overall for applicants. The Trump administration sought to cancel the program but was blocked by a federal court.

“Another administration, a court could also strike it down,” said Jeremy Neufeld, a senior immigration fellow at the Institute for Progress. “A visa gives immigrants a lot more protections both for themselves and their business in the long-term.”

Other available visa options don’t match the circumstances of startup founders. A limited number of H-1B specialty occupation visas are available every year, but that program would require a founder give up voting shares in their company. O-1 visas target individuals of extraordinary ability but require them to demonstrate sustained success—a tough task for a founder launching a brand new company.

After raising money from investors, international entrepreneurs “basically have another part-time job” securing a visa, said Evan Farrell, chief technology and co-founder of Path.me, a startup that bills itself as a financial adviser for Generation Z, that helps students find money to pay for college.

“If you’re young and unknown and without a degree but you’ve raised significant capital on the order of millions, there really isn’t a visa for you,” Farrell said.

Farrell launched Path in 2018 while he worked out of Toronto and his co-founder was based in New York City. He eventually secured an L-1 visa for intracompany transfers, but only after spending three years building the company in two different countries while attempting to secure a visa.

“We would have hired way more people in the U.S. if I was able to get in,” he said.

(Updates with comments from American Immigration Council 17th and 18th paragraphs. An earlier version corrected the title of Jeff Farrah in the 13th paragraph. )

To contact the editors responsible for this story: at aharris@bloomberglaw.com; at csaenz@bloombergindustry.com