A Starbucks Coffee shop is seen in the background as people gather during a rally and march in Seattle, on April 23, 2022.
Photo by JASON REDMOND/AFP via Getty Images

will get its first chance to challenge a union victory in a federal appeals court if the National Labor Relations Board rules the coffee chain illegally refused to bargain with unionized workers at its signature Seattle Roastery.

The board is poised to rule on General Counsel Jennifer Abruzzo’s request for summary judgment against Starbucks, putting the case on a fast-track for federal court by skipping over the administrative law judge phase, which typically involves a hearing and a decision.

Starbucks can only contest the union victory in federal court if it loses the failure-to-bargain case at the board level. Federal labor law forbids direct court review of board decisions in representation cases.

Although the Seattle Roastery is just one of more than 250 stores where workers have chosen to join Starbucks Workers United, the location’s elevated status in the company lends special significance to the legal battle over its unionization.

Starbucks CEO Howard Schultz called the Seattle Roastery the “fulfillment of a decades-long dream—an homage to our relentless pursuit of coffee innovation” when it opened in 2014, just blocks from Starbucks’ first location.

“There’s no question that this is laden with symbolism,” said the union’s attorney, Ben Berger of Barnard Iglitzin & Lavitt LLP. 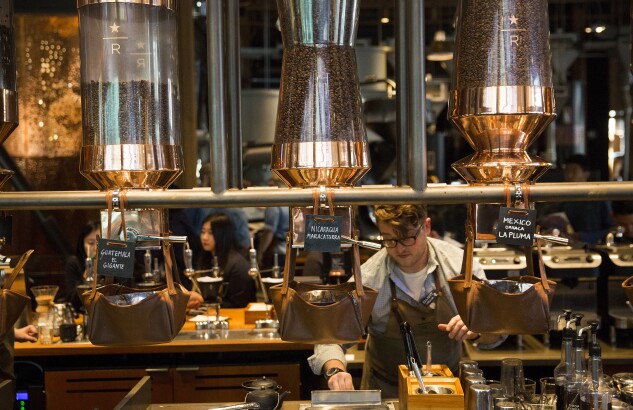 A barista works at the Starbucks Reserve Roastery and Tasting Room in Seattle in 2017.
Photographer: Mike Kane/Bloomberg via Getty Images

The fight over unionizing the Seattle Roastery also carries particular importance because it involves a bargaining unit of about 100 workers, which is much larger than the typical unit size at Starbucks, Berger said.

Starbucks didn’t respond to requests for comment on the case.

Beyond the implications for unionizing at Starbucks, the case also gives the NLRB an opportunity to strengthen its deterrent against employers shirking their duty to bargain with unions.

The board’s remedies are insufficient to prevent employers from drawing out bargaining to kill worker enthusiasm and potentially avoid reaching a contract, according to the NLRB general counsel’s office, union lawyers, worker advocates, and labor law scholars.

It takes an average of 465 days for a newly recognized union to ratify a first contract, a Bloomberg Law analysis found. That negotiation length has grown in recent years.

But the board’s moves to potentially boost its remedial power—which would require striking down a Nixon-era precedent rejecting monetary damages in addition to a bargaining order for employer recalcitrance in union negotiations—could delay a decision on the general counsel’s bid for summary judgment in the Starbucks case.

Video: Union Busting: What Employers Can and Cannot Legally Do

The Seattle Roastery dispute is a “perfect illustration” of why the NLRB should change case law to prevent employers from tactically shirking their bargaining obligations, said Berger, the Starbucks Workers United lawyer. There’s been huge attrition, including among union activists, in the store’s workforce since the union election win in April, he said.

The NLRB’s current practice of ordering employers to negotiate when they illegally refused to bargain previously rewards them for violating the National Labor Relations Act, the general counsel’s office argued.

To compensate workers for their employers’ refusal-to-bargain violations, the NLRB would have to overrule its 1970 decision in Ex-Cell-O that denied the board that authority.

The Starbucks case is one of three asking the NLRB to strike down Ex-Cell-O and impose an enhanced remedy that appear ripe for a ruling. The general counsel’s office in June sought that change to board law in a dispute involving a New York veterinary hospital, but that case subsequently settled.

If the NLRB creates a new, extraordinary remedy for refusing to bargain, it will take its time to carefully craft a ruling that will be durable to legal challenge, said Anne Lofaso, a labor law professor at West Virginia University and a former NLRB attorney.

That will likely delay the ruling in the Starbucks case, even if the board overturns Ex-Cell-O in one of the other pending disputes, she said.

Starbucks doesn’t deny that it’s refused to bargain with the union—calling the dispute a “‘test-of-certification’ case"—but the company still opposes summary judgment. The coffee chain argued that the NLRB regional director in Seattle used the wrong Covid-19 statistics in his order directing a mail-in election rather than an in-person vote.

In addition, there are two new legal issues requiring the board’s consideration that weren’t part of the underlying representation proceeding, Starbucks said.

The company said its allegations of collusion between the unions and NLRB personnel, including in the Seattle region, show that the agency failed to protect the integrity and neutrality of its election procedures. Summary judgment on that issue is inappropriate, it said.

“To begin, frankly, this is not a decision the Board should make,” Starbucks said in a filing. “The decision is for an Administrative Law Judge.”

But Starbucks provided no basis for why Wilcox or Prouty must step aside, the NLRB general counsel’s office said in a brief. The merits of the company’s request should be left to Wilcox and Prouty to decide, the office said.

“A party may not strategically wait until its answer to a resulting unfair-labor-practice complaint to disclose the existence of a possible basis for objections to the election,” according to the brief. “The Board should not permit Respondent to further its goal of delaying bargaining by now reopening the record based on allegations Respondent could have raised weeks or months ago.”

The NLRB has already rejected Starbucks’ argument that the Seattle regional director improperly ordered a mail-ballot election, denying the company’s two requests for review, the general counsel’s office said. The company hasn’t offered any new evidence or any special circumstances warranting the board to consider the issue further, the office said.