US labor unions engaged in the most work stoppages last year since 2005, with education services workers accounting for three out of every five employees involved, according to Bloomberg Law data.

Retail was the most active industry for work stoppages, with 125 strikes out of the 314 overall. Starbucks Inc. alone faced at least 107 strikes. But even without the walkouts at the coffee retailer, as unions focused on organizing its local stores, last year was still a record setting year for worker actions, according to Bloomberg Law analyst Robert Combs.

Manufacturing and health care were two other sectors that had dozens of work stoppages last year. But of the at least 222,306 workers involved in stoppages, more than 137,000 were educators, researchers, and other academic professionals.

In addition to 314 strikes, there were three employer-initiated lockouts in 2022.

The dual economic factors of a tightening labor market and rising inflation helped elevate union activity last year, according to Ken Jacobs, chair of the UC Berkeley Center for Labor Research and Education.

“Many workers understood the opportunity of this moment in terms of winning greater pay and benefits,” Jacobs said. “And I think they faced a tremendous need. All of those together really pushed a lot of the strike activity.” 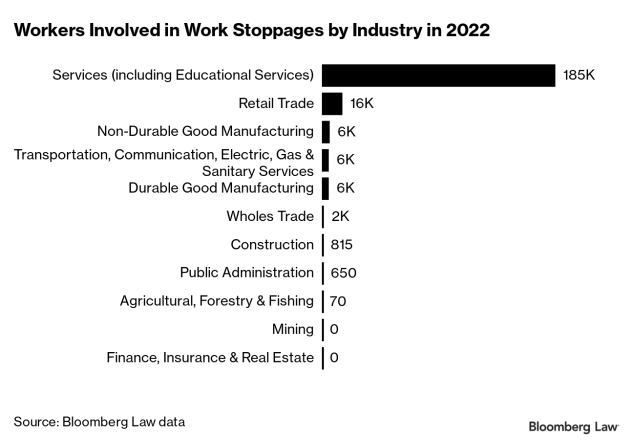 One of the most defining work stoppages of 2022 was also its largest: a six week strike at the University of California that involved approximately 48,000 graduate student workers. The strike was the largest at any college or university since at least 1990, according to the database.

Graduate workers represented by the United Auto Workers went on strike after they were unable to reach consensus with the university system over pay increases and workplace protections for sexual harassment and discrimination.

“Before the strike, many people had questioned whether a strike could really achieve anything that we were demanding,” said UAW 2865 president and University of California Los Angeles doctoral candidate Rafael Jaime. Local 2865 represents 19,000 teaching assistants, graduate student instructors, tutors, and readers across the UC system.

“I think immediately after we went on strike and people saw how many workers were out there—it raised expectations,” Jaime said. “People knew that we had the power to win really transformative demands. And that’s what allowed us to continue striking for the next five weeks.”

The strike ended on Dec. 23 after the graduate workers ratified new contracts. The agreement included wage increases of up to 66% over the life of the agreement and additional workplace protections against bullying and harassment, according to the union. 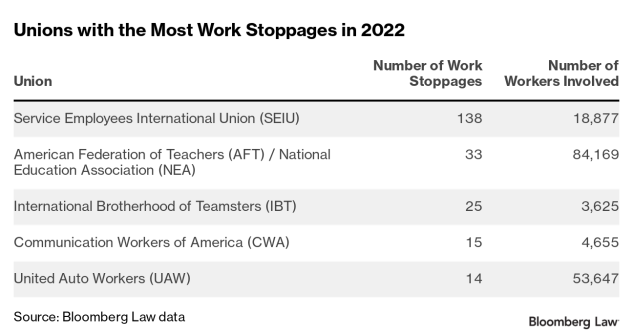 Numbers alone don’t tell the whole story of work stoppages last year, especially in education, according to the head of one of the nation’s largest teacher unions.

Workers affiliated with the two largest teachers’ unions—the AFT and the National Education Association—had the largest share of union members engaged in a work stoppage last year. More than 84,000 workers across the two unions participated. The 33 stoppages from the two unions were second only to the Service Employees International Union, which engaged in 138.

Strikes involving Minneapolis public school teachers and graduate student workers in Chicago were among the AFT’s major actions in 2022.