Economists and attorneys are keeping a close watch on how the Biden administration’s regulation raising the federal contractor minimum wage to $15 an hour later this month could have spillover effects on the labor market as a whole.

The labor shortages affecting sectors across the economy during the pandemic have vastly complicated hiring and put a premium on retaining talent. Major retailers and big box companies that already pay more than $15 per hour are contributing to staffing problems in certain sectors and forcing competitors to “discuss the appropriate wage rate given the hiring pressures,” said Kathleen McLeod Caminiti, co-chair of the wage and hour and pay equity practice groups at Fisher & Phillips LLP.

“This is not an issue to be ignored by employers even if you’re not a government contractor,” McLeod Caminiti added. “The spillover effect could have a dramatic effect on their business in the very near term.”

But other observers noted that those same pressures also will make it hard to gauge broader effects, if any, of the regulation.

While the left-leaning Economic Policy Institute estimates the rule will raise wages for up to 390,000 federal contractors, roughly half of whom are women or people of color, some labor market observers said spillover effects could be limited because the bulk of workers on federal contracts are not paid minimum wages.

“The federal contractor workforce is generally not a minimum wage workforce,” said Michael Saltsman, managing director at the Employment Policies Institute. Half of all federal contractors are in manufacturing or professional and technical services, which has an average wage of $30-37 per hour, according to his group’s calculations.

The rule’s “bite” is expected to be felt by contractors in the accommodation and food-service industries, “but that’s a pretty small percentage, even of federal contractors,” Saltsman said, noting that those businesses make up about 2% of all companies that do business with the federal government.

The rule, which stemmed from one of President ‘s executive orders, locks in the higher wage floor on new or updated contracts starting Jan. 30. Jessica Looman, acting administrator of the U.S. Department of Labor’s Wage and Hour Division, issued a memo Jan. 13 to guide enforcement.

The wage boost applies to a greater number of contractors than an earlier Obama-era measure, which also expands the possibility of impact beyond federal contracts, said Ellie Riegel, an associate in Crowell & Moring’s litigation and government contracts groups. 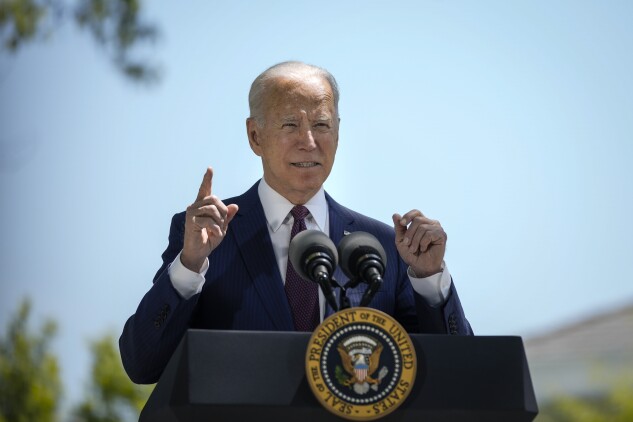 President Biden speaks outside the White House on April 27, the day he signed an order for the U.S. Labor Department to release a rule to raise the minimum wage to $15 for workers on government contracts.
Photographer: Drew Angerer/Getty Images

Ben Zipperer, an economist at the Economic Policy Institute, said there is likely to be some spillover affecting companies that were or are likely to become contractors due to the normal turnover in federal contracts from year to year.

Clemens Noelke, a research scientist at Brandeis University’s Heller School for Social Policy and Management, pointed to his prior research that showed minimum wage increases at companies like and spurred competitors to follow suit. He said he expects the Biden rule to trigger “similar spillover effects.”

“We did see fairly immediate responses to the announcement of these voluntary company-specific minimum wages, and quite a bit larger than one might have expected,” he said.

“We would also expect basically that in areas where there are more federal contractors, we’d see these effects as well. They should be relatively visible,” Noelke added. This “suggests that there’s other angles to increase wages in the low-wage, minimum sector in the absence of a high federal minimum wage or local minimum wages.”

Similarly, Zipperer noted that researcher Conrad Miller found that affirmative action requirements for government contractors increased the share of Black workers at those companies and that the growth continued after firms were no longer servicing federal contracts. That shows mandates in the federal contractor workforce “can have a lasting and spillover effect, beyond just the current federal contractors,” Zipperer said.

It may also be an administrative difficulty for larger contractors to distinguish between which employees working on federal contracts are covered by the requirement, and which aren’t, said Marc Freedman, vice president of employment policy for the U.S. Chamber of Commerce. That may lead some companies to simply pay all employees at least $15 per hour.

Kris Meade, co-chair of Crowell & Moring’s labor and employment group, predicted the rule won’t have “a large impact” on the overall labor market “because it really is touching such a small group of employees.”

Market-related hiring pressures have been significant for months, making it harder to trace any real spillover linked to the contractor order.

Freedman, of the U.S. Chamber, added: “The pressure for employers to pay higher wages is there regardless of any impact of this regulation.”

Saltsman, of the Employment Policies Institute, said spillover is theoretically possible in contractor-heavy local markets with a lower hourly wage. But he said he’d be “skeptical that there are too many scenarios where you have a federal contractor who is such a large player in a local economy that they have that kind of impact.”

“In an economy where you’ve got some 74 million workers paid hourly rates, it’s hard to see how something like that would sort of translate to much more than what I think the Biden administration intends it to be, which is a symbolic victory,” Saltsman said.

A $15 minimum wage isn’t “going to be so much triggered by this regulation as it is just the drumbeat that we hear across the country,” Meade added.