If history is any indicator, the pendulum soon will swing back in favor of graduate student employee unions finding favor at the National Labor Relations Board.

Two decades of union petitions filed with the board show that when it’s under Democratic control, student worker organizing at private colleges spikes. That organizing activity is expected to tick up again as the Republican majority on the NLRB is likely to switch to Democratic control at the end of August.

The last time a Democratic board had the opportunity to rule on graduate student employee organizing petitions, nearly 20,000 students joined labor unions, according to the National Center for the Study of Collective Bargaining in Higher Education and the Professions at CUNY Hunter College.

And Bloomberg Law data shows that almost all graduate student employee union petitions filed with the board in the last two decades immediately followed Democratic-majority rulings in favor of unionization.

“I expect unions to start filing petitions again once the Democrats have the majority at the board,” said Bloomberg Law labor and employment analyst Robert Combs. “Based on the trends over the last two decades, it looks like grad student organizing is always bubbling under the surface.”

President ‘s two nominees to the five-member board, which can grant proposed bargaining units the right to proceed with an election, would flip the majority to Democrats after Republican member William Emanuel’s term ends Aug. 27, assuming both are confirmed. The full Senate is expected to hold final votes Wednesday on Biden’s nominees, Gwynne Wilcox and David Prouty. Republican labor boards traditionally have been less receptive to student organizing efforts than Democratic ones.

Graduate student employees at public universities in states with amenable laws have long been able to form collective bargaining agreements with their employers, but the NLRB has granted and taken away that right for students at private schools several times since it was first allowed in 2000, said William Herbert, executive director of Hunter College’s National Center.

Those in a bargaining unit gain potential strike power, said Nicholas DiGiovanni of Morgan, Brown & Joy. DiGiovanni has represented school administrations, including those of Tufts and Harvard universities, in collective bargaining negotiations. 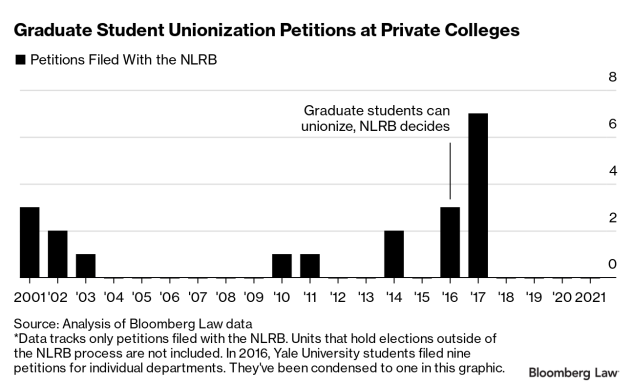 The Democratic-controlled NLRB ruled in 2016 that graduate research and teaching assistants at Columbia University were entitled to collective bargaining under the National Labor Relations Act. That decision emboldened students at 10 other schools to file petitions to join unions in 2016 and 2017. The unions later withdrew outstanding petitions when control of the board flipped back to Republicans, denying the new majority a chance to set precedent by rebuffing a petition.

Of the 28 graduate student employee petitions filed between 2000 and 2021, 18 came after the Columbia decision in August 2016, Bloomberg Law data shows. Nine of those were so-called “micro-units” at Yale University.

“This moment may be comparable to the 2016 Columbia decision,” said Adrienne Eaton, dean of the School of Management and Labor Relations at Rutgers University. “Only the data will tell us, but there’s no reason to think it won’t. The unions are interested, and grad students are, too.”

A Democratic-controlled NLRB first allowed graduate student employees at New York University to unionize in 2000, leading to a wave of organizing at private schools. That continued until the board reversed course four years later, when it decided that graduate teaching assistants at Brown University were students, not statutory employees, and therefore couldn’t collectively bargain.

“We’re probably entering a period where the decision in Columbia is not going to change for a while,” DiGiovanni said, adding that he expects a friendly board to once again become an avenue for new petitions to organize.

“Graduate workers successfully resisted the Trump NLRB’s baseless attempts to strip them of their union rights, and their appetite for organizing and activism is as great today as it’s ever been,” Randi Weingarten, president of the American Federation of Teachers, said in an email. AFT unionized several units of graduate student employees. “The changing makeup of the board will help, but we should not forget that grads never stopped organizing and still managed to achieve recognition and first contracts during the Trump years, including at Georgetown and Brown.”

The number of unionized graduate student employees at both public and private schools increased by nearly 20,000 between 2013 and 2019, to about 83,000, according to Hunter College’s National Center. Most of that growth happened immediately after the Columbia decision, with four-fifths of the new union members joining between 2016 and 2019 alone—a significant acceleration from the previous period.

“The comparatively large size of graduate student employee bargaining units is one reason, among many, that campus organizing campaigns receive support from unions,” Herbert wrote in an email. “Another factor is that successful organizing is easier among younger, ideologically motivated, and non-tenured academic employees.”

There’s potential for more progress in coming years, both at public and private schools, said Rafael Jaime, president of United Auto Workers Local 2865, which represents more than 19,000 graduate teaching assistants and instructors throughout the University of California system. He said another 17,000 graduate research assistants across the entire University of California are poised to form another UAW chapter.

Public-sector graduate student employee unions are much more advanced than their private-sector equivalents, Herbert said, after the first contract was ratified in 1970 at the University of Wisconsin-Madison. While state laws differ, in general their efforts have been more stable.