A master’s degree could be the winning ticket in the scramble for skilled worker visas next year as the federal government seeks changes to the H-1B lottery.

U.S. Citizenship and Immigration Services has signaled that it wants to skew the lottery for the skilled guestworker visas to favor workers with advanced degrees from U.S. colleges and universities. The agency has finished a proposed regulation on the issue that would also create a preregistration process for employers seeking workers on H-1B visas.

USCIS Director L. Francis Cissna recently told Bloomberg Law in an exclusive interview that he’s aiming to have the regulation finalized by the time the next H-1B lottery rolls around in April. The proposal currently is being reviewed by the White House Office of Management and Budget, the last step before being officially published and opened up for public input.

The agency conducts a lottery for H-1B skilled guestworker visas because demand has dwarfed the supply of 85,000 per year. Allowing employers to preregister for the lottery would mean an employer wouldn’t have to go through the hassle of putting together petitions and supporting documents until after it’s certain it’s been selected. 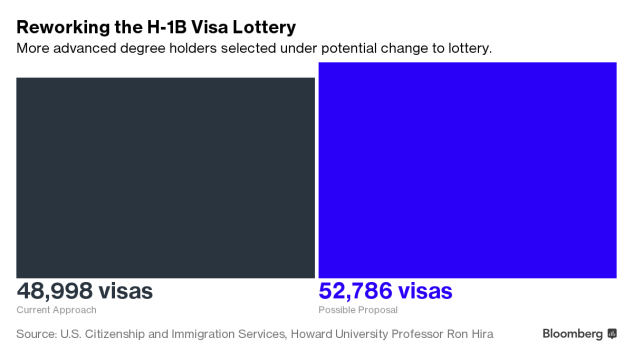 The most recent description of the proposal contains a plan to “increase the probability of the total number of petitions selected under the cap filed for H-1B beneficiaries who possess a master’s or higher degree from a U.S. institution of higher education each fiscal year.” It also hints that wage levels could be in the mix, per a directive from President Buy American and Hire American executive order.

But it may not be all that easy to create preferences for both U.S. advanced degree holders and those making the most money, of Clark Hill in Detroit told Bloomberg Law.

H-1B workers with advanced degrees from U.S. colleges and universities are likely to be hired straight out of school and so would earn lower, entry-level wages, Nowlan said. Anyone hired at wages associated with greater experience is more likely to have obtained a degree outside the U.S., he said.

In limited circumstances, there could be workers with an advanced U.S. degree who also merit higher levels of pay, but they aren’t numerous enough to meet the annual cap on H-1B visas, Nowlan said.

“USCIS is intent on allowing the public to seek immigration benefits electronically to ensure a more efficient and effective adjudicatory process, and a major part of that effort is to allow employers to electronically register for the high-skilled workers they need,” USCIS spokesman Michael Bars said in an email to Bloomberg Law. “USCIS expects that shifting to electronic registration would reduce overall costs for petitioners and create a more efficient and cost-effective H-1B petition process for USCIS.”

“Importantly, the public will have an opportunity to comment on any proposed rule and we expect this transparent approach to be widely embraced by employers who need high-skilled workers,” Bars said.

It’s questionable as to whether the law allows the USCIS to make such a change by regulation, of Fragomen, Del Rey, Bernsen & Loewy in Los Angeles told Bloomberg Law. Creating a list of weighted criteria that determines an order of preference is a “dramatic change” that would require congressional approval, he said.

But Congress did indicate a preference for advanced degrees, Howard University professor Ron Hira told Bloomberg Law. Lawmakers set aside an additional 20,000 H-1B visas, over and above the regular cap of 65,000, for workers with advanced degrees from U.S. institutions, he said.

“Congress didn’t anticipate that the program would be immediately oversubscribed,” Hira said. That’s why there’s no language in the Immigration and Nationality Act about a lottery, he said.

A lawsuit challenging the lottery was tossed by a federal judge in Oregon in March 2017. The lottery was a reasonable way for the USCIS to meet its obligation to adjudicate H-1Bs “in the order in which petitions are filed” when hundreds of thousands are received on the same day, he said. The employer that brought the case appealed the decision but later decided to drop it.

“If they change the regulation to give preference” to workers with advanced degrees and/or higher pay, “then they likely have the power to do it,” Nowlan said.

The difference is a total of 48,998 advanced degree holders getting H-1Bs under the first scenario, and 52,786 under the second, he said.

It’s hard to say what the practical effect would be of tilting the lottery toward favoring advanced degree holders without knowing the specifics of the proposal, Blocker said.

But “there seems to be the built-in assumption” that someone with a master’s degree performing work at that level “is intrinsically more valuable” than someone with a bachelor’s degree, he said. “I don’t know if that’s the case in every situation.”