A demonstrator holds a sign outside a Manhattan courthouse in January 2020, during the trial of disgraced former Hollywood movie mogul Harvey Weinstein, a high-profile prosecution that helped propel the #MeToo movement.
Photographer: Timothy A. Clary/AFP via Getty Images

The U.S. Senate delivered a major legislative victory for the #MeToo movement, clearing a House-passed bill to guarantee that victims of workplace sexual harassment or assault are free to pursue lawsuits in court.

The Senate passed on a voice vote Thursday, sending to President a bill that will transform how businesses resolve allegations of workplace sexual harassment and assault, and how such issues are addressed in employment contracts.

The measure, which the House passed Feb. 7, would prohibit enforcement of contract provisions that mandate third-party arbitration of workplace sexual harassment or assault claims. Arbitration is an out-of-court process that is legally binding and takes place behind closed doors.

The #MeToo movement exposed how mandatory arbitration agreements, often signed as part of employment contracts, can favor employers over workers and keep allegations out of the public eye, shielding repeat violators of the law. Senate Majority Leader called the action “one of the most significant changes to employment law in years” on the Senate floor on Thursday.

The public pressure to give victims the freedom to pursue civil lawsuits despite prior arbitration agreements has been building in recent years, and helped produce a partisan shift that made Senate passage possible.

Workers’ rights groups and high-profile advocates, such as former Fox News broadcast journalist Gretchen Carlson, convinced members of Congress on both sides of the aisle to support their cause, leading to the rare passage of legislation to change federal employment law. 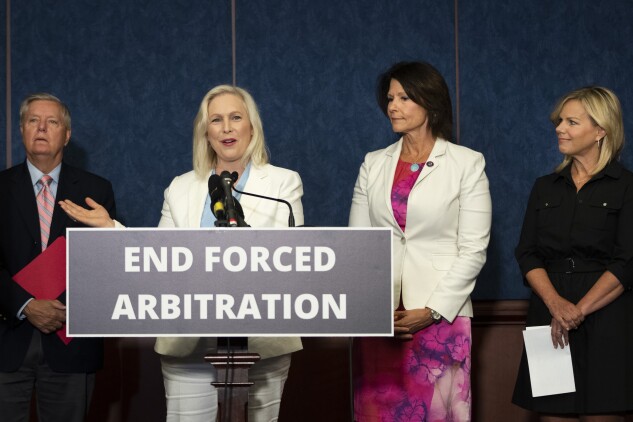 “The bill would apply to any new claims, regardless of when the bad behavior occurred and barring any state or local law that might limit when a claim is brought,” according to a spokesperson for Bustos.

The bill would amend the Federal Arbitration Act to ban agreements requiring arbitration that were signed prior to an incident of workplace sexual harassment or assault. But there’s a key distinction that helped win GOP backing—arbitration will still be allowed if the worker chooses that course after an incident.

(Updates with comments from Schumer and Bustos's office in the fifth and ninth paragraphs.)

To contact the editors responsible for this story: at jlauinger@bloomberglaw.com; at hrothman@bgov.com