Seafood processors and fishers struggling with falling prices and disappearing markets during the coronavirus pandemic are pushing for federal bailouts following a government directive to send aid to New England’s lobster industry.

“We’re all scared. We’ve got tons of money wrapped up in these businesses,” said Nick Muto, the Cape Cod Commercial Fishermen’s Alliance chairman and an independent small-boat captain dealing in groundfish and lobster. “We’re definitely hoping for some help here from the federal government,” Muto added. “But I’m leery to bet on it.”

Restaurant closures, mandated by local officials nationwide to slow the rate of infection, decimated seafood vendors’ sales. Now, some states beginning to relax restrictions are seeing a resurgence of Covid-19 cases—just as the industry tries to recoup its losses.

Down on Fisherman’s Wharf, the Sea Lions Bark at Empty Piers

“Seafood has taken a serious hit from the Covid-19 lockdown,” said Sen. (R-La.), who represents a top state for seafood production. “Those who make their living fishing need the same type of relief that’s been afforded to other food producers.”

Cassidy joins several lawmakers, including Massachusetts Democrats Sen. and Rep. in calling for government aid for the industry. 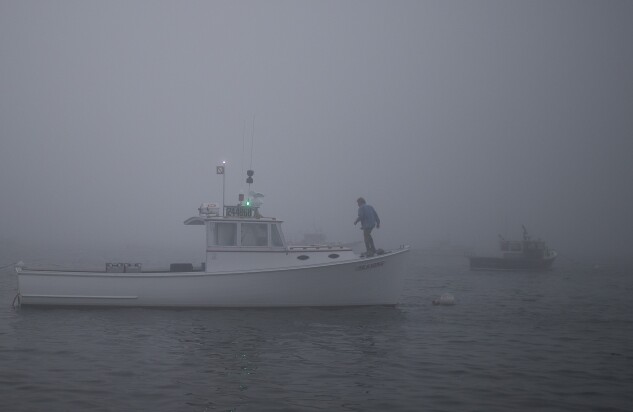 A lobsterman prepares his boat for a day’s catch in the Gulf of Maine off Stonington, on July 6, 2019.
Joe Raedle/Getty Images

President ordered the Agriculture Department on June 24 to assist the U.S. lobster industry with funds from the $28 billion trade war bailout authorized by his administration.

“Our U.S. fisheries work to continue to support 1.7 million jobs and to generate $200 billion in annual sales,” Commerce Secretary said in a May 7 statement.

The CARES Act coronavirus stimulus law () allotted $300 million for assistance to fisheries, disbursed state by state. Alaska and Washington state reaped the largest awards of $50 million each, followed by $28 million for Massachusetts and more than $23 million for Florida.

The aid barely scratched the surface of what’s needed, the industry says. “That amount of money really doesn’t begin to address the impact,” said Seth Rolbein, director of the Cape Cod Fisheries Trust. “We are hopeful that there will be more.” 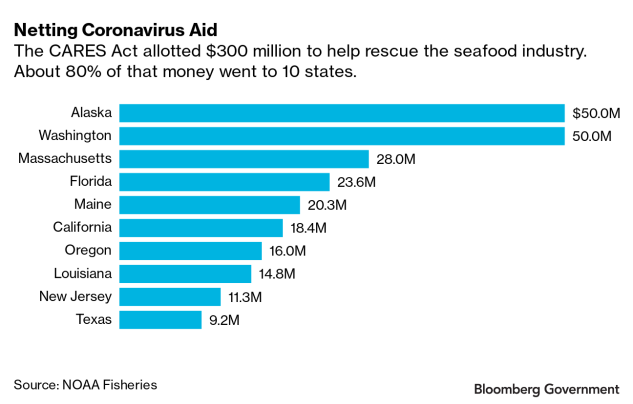 Rolbein said the pandemic caused a breakdown of the seafood export chain, which typically ships lobsters to China and dogfish to Europe. Some producers, such as scallopers, are selling directly to local consumers, but “it can’t replace the volume of a real market,” he said.

Increased federal purchases of seafood commodities, which Rolbein said “historically the USDA has not done much with,” was one solution he proposed, pointing to the department’s May announcement that it would buy $20 million in Atlantic haddock, pollock, and redfish with CARES Act funds.

Department officials didn’t immediately respond to a request for comment.

“While the USDA purchases help, Congress must also provide direct relief to the industry in any future COVID-19 relief package,” said Rep. (D-Mass.), who represents the state’s coastal district.

David Veal, executive director of the Mississippi-based American Shrimp Processors Association, said he anticipates losses, including shrinkage in fishing fleets, in the coming months. Temporary restrictions on foreign trade are needed as a means of survival, he said.

“If we just reduce imports 25% for one year, it would be a tremendous financial asset to this industry,” Veal said. “It’s a cash-free way to help.”

Trump threatened retaliatory tariffs on China as part of his June 24 order, and also called for a review of how a trade deal between Canada and the European Union is affecting the U.S. lobster industry.

Northeastern lobstermen bracing for their peak season’s start this month are still “definitely concerned,” said Marianne LaCroix, executive director of the Maine Lobster Marketing Collaborative. “We don’t know the full impact to our industry yet,” she added.

Still, leaders have yet to receive “information on any potential funding” following the president’s recent announcement, LaCroix said. “Any relief is welcome.”