President Joe Biden’s acknowledgment that Democrats’ massive tax and spending package will have to be pared back leaves an array of provisions that were expected to move with the legislation in limbo.

Some left-out pieces could be tackled by the administration—albeit in a lesser capacity—while others could find their way into bipartisan measures still on the agenda in Congress this year. Others, like paid family leave or farm aid will likely need to wait until next year.

Meanwhile, a path forward remains for Democrats in Congress on the Build Back Better Act that could include clean energy, child care, and health provisions, the White House signaled Thursday. Other pieces like an enhanced child tax credit are up in the air.

“I do see a smaller BBB package happening, but it’s looking less like Christmas,” said Yasmin Nelson, former tax policy adviser for then-Sen. Kamala Harris (D-Calif.), meaning that it’s unlikely every Democratic priority in the earlier version () would be included. Nelson is now senior principal at the law and lobbying firm Bracewell.

“If they’ve moved towards where it needs to go, and it’s a few things done well, I think that bodes very well for BBB,” said Ben Ritz, a policy director for the Progressive Policy Institute, referring to a scaled-back package that focuses on funding fewer programs for a longer amount of time. 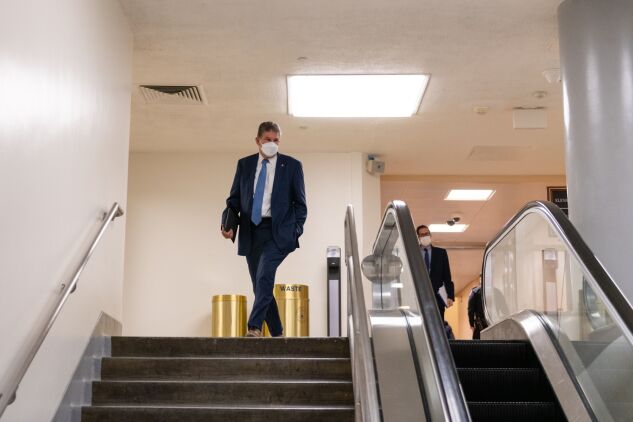 Sen. Joe Manchin (D-W.Va.) is crucial to the passage of a tax and spending package.
Photographer: Eric Lee/Bloomberg

Child Tax Credit: A major decision lingers over whether to fund a longer-term monthly child tax credit payment—with work requirements, a lower cap on who qualifies, and a longer time frame for enactment—or other priorities like universal preschool or subsidized child care. Biden said Wednesday that he wasn’t sure the child tax credit could be part of the new package, but key Senate Democrats including Finance Committee Chairman (D-Ore.) said Thursday they’ll fight to keep the child tax credit in.

Health Insurance: Two proposals designed to shrink the uninsured population—extending enhanced Obamacare subsidies and boosting Medicaid in some states—are top candidates to remain in the scaled-back package. House Speaker (D-Calif.) said Thursday that “millions of people will have access to health care because of what is in the bill.”

Clean Energy: The $555 billion in climate funds in the original proposal largely has the support of pivotal Sen. (D-W.Va.) and is likely to anchor a subsequent version of the Democrats’ package. The measure currently includes clean energy tax credits for hydrogen; advanced energy manufacturing; and wind, solar, and nuclear power. It also includes fees on methane emissions from oil and gas wells, pipelines, and equipment.

White House Climate Adviser Gina McCarthy said Thursday she expects an electric car tax credit to make the cut, although she didn’t specify whether an extra $4,500 for purchase of an electric car from a unionized, U.S. company would be included. Manchin has pushed back on that piece.

Child Care/Preschool: The House-passed version of the Build Back Better Act included two years of free preschool for all 3- and 4-year olds as well as a cap on child care costs at 7% of income for families earning less than 250% of the poverty level. The House version allotted about $118 billion for both provisions for three years and authorized them for six years. That’s probably not going to pass muster in the Senate, where Manchin has protested sunsets on spending programs to curb the overall price tag. It’s likely those provisions will need to be reworked.

SALT Cap: A group of Democrats in the House and Senate have made raising the SALT cap, which allows taxpayers to deduct some of their state and local tax payments from their federal tax return, a must-do item in this legislation. On Thursday, House lawmakers from high-tax states reiterated their demand that they would withhold their votes from the rest of the package unless the current $10,000 annual deduction cap is raised. Because of the narrow Democratic majority in the House, they have enough leverage to sink the whole endeavor unless their demand is met.

Several smaller pieces of the House-passed Build Back Better Act—generally bipartisan and less costly than the package’s big-ticket items—could find their way into a fiscal year 2022 appropriations package or an emergency spending bill, but the funding levels might not be as high or the language may not be as strong. Other parts could move as stand-alone bills if there’s enough backing from Republicans.

Pandemic Preparedness: The House-passed Build Back Better Act contained $3 billion for pandemic preparedness efforts, an idea that has bipartisan support. Sen. (D-Wash.), chair of the Senate Health, Education, Labor and Pensions Committee, recently said she and the panel’s ranking member, Sen. (R-N.C.), will introduce legislation to improve the supply chain for medical products and the process for developing certain kinds of viral tests, as well as fight misinformation.

Medicaid in U.S. Territories: U.S. territories get less-favorable Medicaid funding compared to states and have relied on supplemental funding from the federal government for more than a decade to cover shortfalls. The Build Back Better Act included a permanent fix to that problem.

Rep. (R-Wash.) and (D-N.J.), the Republican and Democratic leaders of the House Energy and Commerce Committee, reached a deal on a five-year extension for Medicaid funding for Puerto Rico earlier this year, but it was abandoned when the Democrats’ spending package took shape. A Republican committee aide said they would welcome a return to that agreement.

Green Cards: Recapturing unused green cards, at least those from the past few years, has support from Democrats and Republicans alike and is in Democrats’ still-pending fiscal 2022 appropriations package. Separate legislation () with sponsors on both sides of the aisle would raise or phase out per-country caps that have left millions of immigrant workers and families in limbo. Both chambers passed versions of the bill but didn’t complete work on it during the last session of Congress.

Labor Enforcement: The House version of the Build Back Better Act included more than $2 billion in extra funding for labor agencies to shore up hiring efforts at the Labor Department and the National Labor Relations Board to bolster enforcement of wage, child labor, and union laws. An appropriations deal could bolster those agency budgets, but employment lawyers said the funding levels likely wouldn’t be as large.

Black Lung Disease: A fiscal 2022 spending bill could be used to renew an excise tax rate to help coal miners with black lung disease. An extension of the tax rate, backed by Manchin, which expired Dec. 31, was included in the Build Back Better Act.

Protection Against Terrorists: The recent Texas synagogue hostage situation renewed lawmakers’ focus on the Department of Homeland Security’s Nonprofit Security Grant Program, which offers security help to nonprofit organizations that are at high risk of terrorist attack. The program would have gotten a $100 million boost under Build Back Better. Any spending bill could boost the program, although the measures Democrats released last year would keep funding flat at $180 million in fiscal 2022.

Other parts of the original Build Back Better Act can still get some attention from the administration without an act of Congress, but those efforts would be incremental.

Drug Pricing: Language allowing the government to negotiate better drug prices could fall out of the package due to disagreements among Democrats about its scope. Absent that, the administration could ramp up its pilot programs testing Medicare payment models to cut prescription drug spending and and other costs for providing health care, said Chris Jennings, a health policy consultant who advised the Obama administration.

Undocumented Immigrants: The House-passed Build Back Better included temporary deportation protection and work permits for millions of undocumented immigrants under a type of humanitarian parole status from the Department of Homeland Security. Without congressional action, DHS could still use its discretion to expand parole grants, though any major buildout would likely draw legal challenges.

The Biden administration is also working to strengthen protections for undocumented immigrants brought to the U.S. as children amid legal peril for the existing Deferred Action for Childhood Arrivals program. The administration also could renew and expand temporary protected status for millions of immigrants in the U.S. who are from certain unstable Central American countries. A coalition of Democratic senators is already pushing for such a move.

VIDEO: Our comprehensive guide to how many votes are needed for almost any scenario in Congress.

Other parts of the Democrats’ original plan are likely going to need to wait until next year or later.

Paid Leave: The House-passed package would have offered four weeks of paid leave for family or medical reasons, but that component, at more than $200 billion over 10 years, is too expensive to make the cut. Democrats are also divided about how to structure it.

Farm Aid: House lawmakers added $28 billion in farm aid to the Build Back Better Act, in addition to about $9 billion for forest restoration. The next opportunity for those provisions might be a farm bill reauthorization. The current farm bill expires at the end of fiscal 2023.