Days after President Trump into law, retailers from to Urban Outfitters Inc. are halting pay for much of their workforce while preserving some benefits.

The wave of furloughs brings the total number of employees who are out a paycheck at major U.S. chains to around 600,000, according to data compiled by Bloomberg.

The stimulus offers tax breaks to companies that keep paying workers who can no longer do their jobs because of the economic shutdown caused by the coronavirus pandemic. While these firms opted not to do that, many are continuing to provide health coverage and under the law may be able to deduct that cost. The package also boosted unemployment benefits by $600 a week, which should be available to these workers. 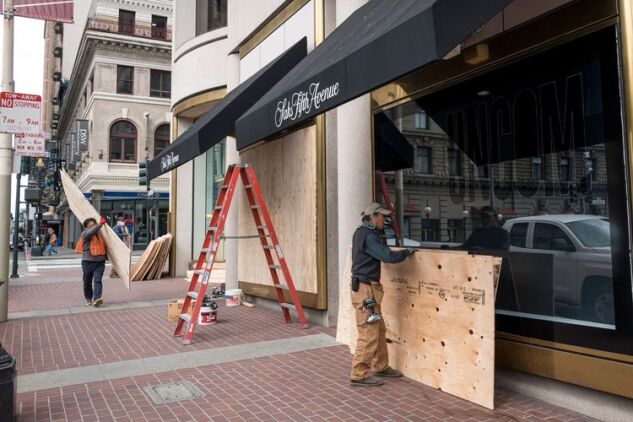 “As wages are one of the biggest costs, furloughing staff who are no longer needed operationally is a simple move that immediately helps the cash position,” said , an analyst at GlobalData Retail. “We will inevitably see more of this as the crisis drags on.”

Millions more are in danger of being furloughed or fired as chains reel from nationwide closures that started about two weeks ago and havenearly 50,000 locations.

Many of these workers are at the bottom of the income ladder. Nearly 16 million people work in the retail industry, at stores ranging from gas stations to fashion boutiques, according to the U.S. Bureau of Labor Statistics. About 5 million of those employees are store associates, who on average make around $24,000 per year, or $11.70 an hour.

On Tuesday morning, Urban Outfitters Inc., David’s Bridal and Guess? Inc. announced they would be furloughing most of their store workers as well.

The list of companies announcing furloughs in the recent days is extensive and includes:

Analysts are concerned that stores may remain closed much longer than initially expected, leaving store associates without work for an extended period. Gap went as far as to offer information to employees on other retailers, such as Walmart Inc., that remain open and are .

Most brands hoped to get back to business within two weeks, but that won’t be possible with the ongoing outbreak. Trump said Monday that he’s extending social distancing guidelines for Americans through the end of April.

Retailers’ were hammered in March as the scope of the U.S. economic shutdown became clear. Macy’s has fallen about 70% this month, with Kohl’s declining about the same amount and Nordstrom Inc. and Gap Inc. both falling about 60%.

“The bottom line is the coast isn’t clear and likely to be choppy and get much worse before getting better,” , an analyst at Jefferies, wrote in a note to clients.

To contact the reporter on this story:
in New York at kbhasin4@bloomberg.net

To contact the editors responsible for this story:
at acronin14@bloomberg.net