The movement toward shielding low-wage workers from job-mobility restrictions could be gaining more bipartisan appeal, as a handful of GOP-majority state legislatures consider mirroring their Democratic counterparts’ recent efforts.

Iowa is close to becoming the first state with a Republican-led legislature to ban employee noncompetes specifically for low-wage workers. A similar GOP-sponsored proposal is pending in West Virginia, based on model legislation unveiled last July by the non-partisan Uniform Law Commission.

“There’s been a lot of attention paid to making sure that lower-wage employees are not subject to noncompetes. There seems to be broad political consensus on that,” said Michael Elkon, an Atlanta-based labor and employment attorney with Fisher & Phillips LLP.

Noncompetes, which bar employees from going to work for a competing business, are one of several types of restrictive employment contracts that businesses sometimes require employees to sign during the hiring process.

Their stated intent is to protect company trade secrets or investment in specialized training. But worker advocates, news reports, and politicians have raised concerns that lower-wage and hourly workers with no access to trade secrets are unfairly blocked from switching to better paying jobs and advancing their careers.

Research suggests 18% of the U.S. workforce is bound by a noncompete, and 38% of workers have signed one previously.

How often employers attempt to enforce noncompetes against low-wage workers is difficult to measure, said Russell Beck, attorney at Beck Reed Riden LLP in Boston, whose practice focuses largely on employment covenants. Enforcement sometimes happens through civil litigation, but can also take the form of a verbal reminder or a cease-and-desist letter to the employee, he said.

“There are a lot of low-wage workers bound by noncompetes and complying with them, even when they might not in fact be enforceable,” Beck said.

In Congress, there have been signs of Republican support for restricting noncompetes, including introduction of the Workforce Mobility Act, a proposal with bipartisan Senate and House sponsors, including Sens. Chris Murphy (D-Conn.) and Todd Young (R-Ind.).

But success at enacting noncompete restrictions has been largely limited to Democrat-controlled statehouses.

At least 10 states have enacted laws that block employers from contractually restricting low-wage or hourly employees’ ability to leave and go work for a competitor. Nevada joined that list last year, as Illinois and Oregon put stricter parameters on their noncompete laws.

How the states define a “low-wage worker” varies widely, with New Hampshire setting the threshold at income less than two times the federal minimum wage, while Oregon and Washington state put the line at roughly $100,000 per year.

The Iowa bill, which passed the state Senate last year and is awaiting a House floor vote, would ban noncompetes for employees making less than $14.50 per hour. 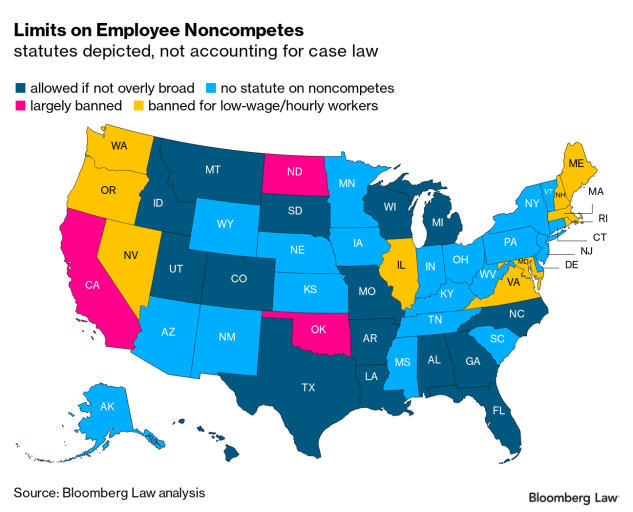 The commission has “much more focus on direct relationships they have with legislatures,” she said, whereas the issue’s primary champions in the past have been worker advocacy groups that are likely to have less influence with Republican lawmakers.

“Especially in the wake of the pandemic people want to see an economy that’s working for workers and not just those who are at the top of the economic scale,” she said.

Banning noncompetes for low-wage workers is a key feature of states’ recent legislation, but it isn’t the only change. States also have begun dictating how and when employers notify their employees or job candidates that they’ll be asked to sign a noncompete.

Both the low-wage worker protections and the notice provisions are included in the ULC’s model legislation. Bills pending in Oklahoma, Vermont, and West Virginia all take their lead from that model bill, with a few variations such as the definition of who counts as a low-wage worker.

For Oklahoma, which alongside California and North Dakota has longed deemed employee noncompetes unenforceable in virtually all instances, passing the model bill would loosen current law by allowing noncompetes— but not for low-wage workers.

Others are taking more aggressive approaches, such as Colorado, where employers can face criminal charges for knowingly imposing a noncompete covenant that violates state law. Effective March 1, the crime will be upgraded to a class-two misdemeanor with tougher potential penalties.

“It certainly takes it an additional step to criminalize the issuance of an unlawful noncompete,” said Meredith Dante, a labor and employment attorney at Ballard Spahr LLP in Philadelphia.

The District of Columbia passed legislation last year that outright bans employee noncompetes in all but a few narrow circumstances. The ban is set to take effect in April, after being delayed last year while it waited for budget funding to implement it, although the council is considering revising the law before it becomes effective.

Release of the commission’s model should help motivate more states to establish clear standards for enforceability of noncompetes, as well as similar covenants such as nonsolicitation agreements, said Beck, who helped write that sample bill.

Business groups have an incentive to want clear, uniform standards, he said, since now many states’ courts determine whether noncompetes are enforceable on a case-by-case basis relying on common law. But don’t expect a rush of states suddenly all adopting the model language, he added.

“It won’t be overnight. It will take years” to potentially get to a majority of states adopting some version of the model, Beck said. “States are really taking a careful look at their current laws.”

The model also gives state lawmakers wiggle room in how they craft their noncompete laws, such as the threshold for deciding who’s a low-wage worker. It draws the line at the average annual wage for a worker in that state, but a footnote tells lawmakers they could opt to set the threshold at one-and-a-half or two times the average, if they prefer a broader definition.

The success of existing state laws at preventing overuse or abuse of employee noncompetes is tough to measure, Beck and Farley each said.

Research into Oregon’s ban on noncompetes for low-wage workers—published by University of Maryland Professor Evan Starr and FTC Economist Michael Lipsitz—found the law might have helped produce a small boost to wage growth and job mobility. But Beck noted it’s hard to be sure whether the noncompete law was the main cause of those economic impacts.

In Dante’s practice, she said she has found clients have begun to think more strategically about which employees they require to sign noncompetes, rather than just automatically including the forms in all new hires’ paperwork.

“To a degree these laws have served their purpose in forcing employers to be more careful in who they are restricting and narrowly drafting their restrictive covenants,” she said.