Rebecca Rainey: While you’ve probably been paying attention to the minutiae of major regulations from the US Department of Labor—think the independent contractor proposal or the still-to-come overtime rule—the agency was doing other work. Here’s what you may have missed.

The initiative, launched last year by the Biden administration, has allocated roughly $230 million to provide technical assistance to workers and labor organizations across the globe. DOL officials say that because of the nature of our global economy, efforts like M-POWER can also lift up American workers by helping to fight exploitation that could undercut the domestic labor market.

IC Enforcement: We wrote earlier this year about how DOL’s Wage and Hour Division had a busy summer cracking down on worker misclassification, but that strong enforcement posture has continued throughout the year.

Since our previous coverage in September, the WHD has announced at least 13 more misclassification cases. And in total since the start of the year, the wage division has issued press releases announcing at least 32 cases involving employers misclassifying their employees as independent contractors.

That’s resulted in roughly more than $27 million in back wages, damages, and penalties from violations involving at least 6,714 misclassified workers in 2022 collectively, based on the information available in DOL’s press releases. (Some of the announcements involving other FLSA violations in addition to misclassification were excluded from these figures because they didn’t explicitly state how many workers were misclassified or the associated penalties.)

Some of the largest cases include: 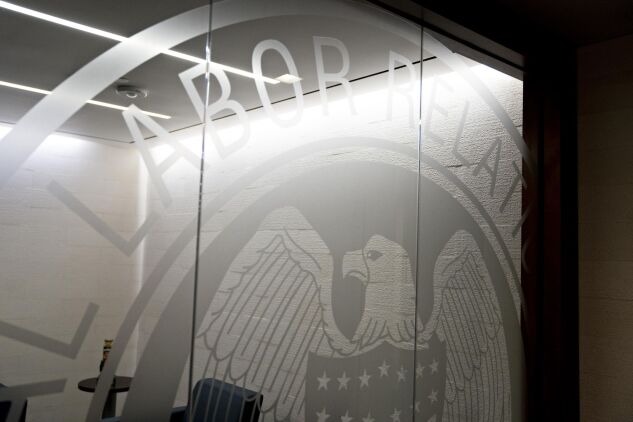 The NLRB seal is displayed on a window at the headquarters in Washington.
Andrew Harrer/Bloomberg

The NLRB has received the same $274 million budget since fiscal year 2014, and agency officials have requested $18.7 million in new expenses for required pay increases, non-labor inflation, and upcoming field office relocations. The rise of organizing across the country has also put the NLRB’s stagnant budget under strain. The agency saw a 53% increase in union representation petitions in fiscal year 2022 from the prior year, as well as a 19% jump in unfair labor practice charges.

The agency has warned that without the funding boost, furloughs are likely next year.

The increase would have to come in the omnibus spending package, which is led by both House and Senate Appropriations committees, due Friday. President Joe Biden requested a 16% boost to the agency’s budget for fiscal year 2023, while almost 150 Congressional Democrats would like to see at least a 34% jump in funding.

Senate Minority Leader Mitch McConnell (R-Ky.) said last week it’s crucial that Congress passes an omnibus bill, and that the bill should not include more domestic spending than what was requested by the president, potentially opening the door to that 16% increase.

The bill’s text release is still up in the air, however. Lawmakers announced last week they had an agreement on the framework of the bill, but that the details still needed to be ironed out.

Rep. Rosa DeLauro (D-Conn.), chair of the House Appropriations Committee, said they were “taking all of that into consideration.”

When asked about the potential for furloughs at the agency, DeLauro responded they were “working on it.”

VA Workers Organize: Meanwhile, late last week the House passed a bill to extend organizing rights to about 110,00 employees at the Veterans Health Administration, who would be allowed to unionize and collectively bargain over compensation and work conditions under the measure.

Four Republicans joined 215 Democrats in voting for the VA Employee Fairness Act, which now heads to the Senate for a vote before the end of the year. The legislation removes restrictions for physicians, dentists, registered nurses, physician assistants, and other health workers at the VHA who can’t collectively negotiate their wages, overtime, scheduling arrangements, and other aspects of the workplace.

“As a nation, we must invest in these front line workers at VA hospitals,” said Rep. Mark Takano (D-Calif.), chair of the House Veteran Affairs Committee and the bill’s sponsor, during debate on the floor. “They deserve to have a voice.”

Punching In will be taking a break for the holidays. We’ll return here and to your inboxes on Monday, Jan. 9, 2023.