Ben Penn and Ian Kullgren: The Biden administration has been reviewing the legality of issuing an executive order to expand federal agencies’ use of project labor agreements, a mechanism that could ensure infrastructure legislation creates union construction jobs, according to six sources briefed on the matter.

The order would update and strengthen an Obama-era order from 2009 that encouraged federal agencies to voluntarily consider requiring project labor agreements when awarding contracts of at least $25 million, the sources said.

A project labor agreement is a pre-hire pact that guarantees a contractor will enter into collective bargaining agreements with at least one union covering the duration of the project. The resulting bargaining deals, which cover employment conditions such as wages, benefits, and safety, also forbid work stoppages, such as a strike or a lockout.

The sources spoke on condition of anonymity to share ongoing deliberations. They cautioned that a final decision hadn’t been made and that a timeline remains unclear. A White House spokesperson declined to comment.

Any such order would help President fulfill his commitment to empower the labor movement via the tentative $579 billion infrastructure deal the president and a bipartisan group of senators announced last week.

But a move to update the Obama framework on project labor agreements could complicate Democrats’ bid to secure Republican votes for infrastructure legislation, which would give government agencies billions of dollars to fund projects on roads, bridges, transit, airports, and other public works. The GOP has a long history of hostility to government-required union pacts.

Such an order also could face a lawsuit from the construction industry.

In the past, when city, county, and state governments have required that publicly funded projects be guided by union pacts, the Associated Builders and Contractors, a nonunion industry lobbying group, has routinely filed litigation alleging constitutional violations. They’ve argued federal labor law preempts such requirements.

Obama’s order was optional for federal agencies, and in the ensuing years, it has rarely led to project labor agreements on federally financed construction projects.

The executive order now under consideration would direct federal agencies to implement project labor agreements when awarding bids to building contractors, but allow for exemptions in circumstances in which the union-coveted deals aren’t deemed practical, two of the sources said.

At an Oval Office meeting in February, building trades union leaders urged Biden to amend the Obama order to make it more difficult for agencies to avoid requiring pacts for unionized labor in construction projects. 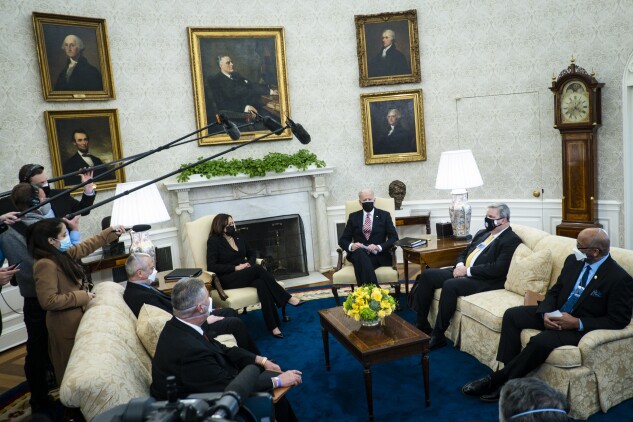 The agency’s rapid-fire enforcement response could set the stage for an industry-wide finger-pointing contest, as plan sponsors face the daunting task of evaluating their third-party service providers’ cybersecurity protocols. There’s also lingering doubt over whether cybersecurity is a fiduciary duty.

The agency wants to safeguard participant data held in 140 million defined-contribution and pension plans. The sensitive information is often maintained by third-party service providers, such as recordkeepers or custodians, whose cybersecurity practices are proprietary, competitive, and secret for the very purpose of remaining secure.

EBSA hasn’t been auditing those vendors directly; instead, it’s targeting plan sponsors to get at service providers’ cybersecurity plans.

“One possible tension is this dance that’s going to occur where no entity—much less a large, complex financial services firm—is going to divulge too much about its cybersecurity measures,” said George Michael Gerstein, an employee benefits attorney at Stradley Ronon Stevens & Young LLP in Washington, D.C. “They don’t want to inadvertently highlight weakness, so they’ll be very careful about how they divulge information. I don’t think plan sponsors should expect to receive every single detail that EBSA may want.”

The guidance doesn’t specifically say whether mitigating cybersecurity risks is a “fiduciary responsibility.”

Plan sponsors have a fiduciary duty to prudently select and monitor their vendors, but it’s unclear whether small plan sponsors with little or no cybersecurity expertise would be able to do that.

The agency said in response to an inquiry that mitigating cybersecurity risks is an existing part of a fiduciary’s obligations. The documentation EBSA is seeking shouldn’t be construed as overly technical or proprietary, it said.

“If plans cannot obtain appropriate assurances from their service providers about cybersecurity, they should look for other service providers,” the agency said in a statement. “Even plans that lack negotiating power have the ability to shop around.”

Chris Marr: In the push for nationwide paid family and medical leave, some congressional Democrats aim to win a sweeter deal for 2 million federal workers.

Under a proposal from House oversight Chair (D-N.Y.), federal workers would be eligible for up to 12 weeks of paid leave annually at full pay. Maloney’s bill, debated by the panel June 24, is more generous than the national program Biden proposed under his American Families Plan. Biden’s model calls for replacing two-thirds of workers’ wages while they’re on leave, increasing to 80% for the lowest-income workers.

Both proposals face enough Republican resistance that inclusion in a budget reconciliation measure, which can be carried by a simple majority, is likely the only way through the divided Senate.

It’s unclear whether Democratic leadership plans to add Maloney’s proposal to the slate of social spending proposals under the American Families Plan, which include the nationwide paid leave model plus child care and education investments—all likely headed for reconciliation if a bipartisan infrastructure bill can pass. Maloney’s federal worker benefit wasn’t included in the American Families Plan.

Federal workers recently gained a paid leave benefit for the birth or adoption of a child. Maloney’s proposal would expand it to include paid leave for a worker’s or family member’s serious medical problem, and for an immediate family member’s military service.

Another path forward for Maloney’s proposal could be tacking it onto the National Defense Authorization Act—the must-pass vehicle used for the federal worker parental leave enacted in 2019.

“There is a really good business case for ensuring access to paid leave for family care-giving purposes,” she added.

Republicans who testified in last week’s House hearing were unified in opposition to the idea. They said federal workers get better pay and benefits on average than private-sector workers, and complained that the Congressional Budget Office has yet to estimate the bill’s costs.

“Politicians sometimes get away with this idea that we can measure our personal compassion by how much of other people’s money we give away,” said Rep. (R-Texas).

Programming Note: Punching In will be taking the Independence Day holiday off. We’ll be back Monday, July 12.