A farm worker in Illinois climbs down from a grain bin after inspecting its capacity in late September.
Photographer: Daniel Acker/Bloomberg

Ben Penn: The Labor Department’s Wage and Hour Division touted new records when it announced prior-year enforcement stats in October the last two years—but the pandemic has flipped the script.

Preliminary data showed the recovery of minimum wages and overtime pay was down by at least $50 million during fiscal 2020, from a peak of $322 million in the prior fiscal year, according to two sources who requested anonymity because they weren’t authorized to discuss the numbers.

The WHD’s annual enforcement tally previously had risen steadily under , and the administration was eager to call attention to its gains in protecting workers’ paychecks.

The department’s October 2018 announcement of $304 million in recoveries for fiscal 2018 was an all-time high until it was eclipsed the following year. Had that momentum continued, it could’ve provided a compelling headline for the administration just ahead of the election.

This year, the WHD has been forced to conduct most of its investigations remotely since March, to avoid Covid-19 infections. The department hasn’t released its final enforcement tally for fiscal 2020, and DOL media representatives wouldn’t say if they plan to do so before Election Day.

Of course, the pandemic altered everyday life for everyone, so comparing the enforcement tallies isn’t apples-to-apples, and it wouldn’t be fair to slam WHD for not maintaining its recent level of productivity.

As the department’s inspector general warned in August, Covid-19 has hindered WHD’s ability to conduct maximum enforcement. Agency-initiated investigations all but stopped as most of the cases were handled over the phone, at least during the early months of the pandemic, the watchdog reported.

Plus, many employers were tougher to reach by phone when their workplaces were closed because of shutdown orders; and it’s been even harder for regulators to persuade businesses to settle up for back wages when cash flow’s been cut off.

Paid-leave focus: The division has spent the pandemic months focused on implementing and enforcing the emergency virus-relief law that provides temporary paid-leave benefits. Recoveries in paid-leave cases typically aid one employee at a time and cover a short period, resulting in less of an impact on the division’s annual stats. 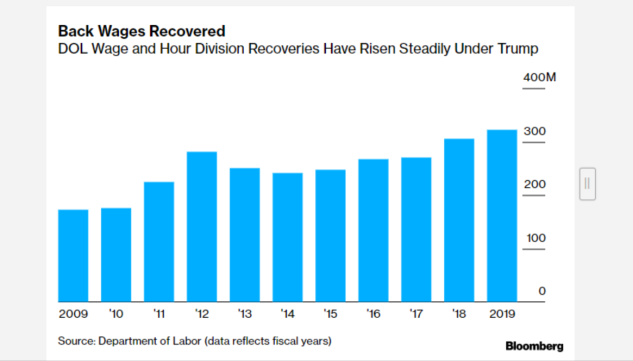 There have been some exceptions to WHD’s suspension of in-person investigations, such as in egregious cases of child labor or when agricultural workers on H-2A visas were in danger.

WHD began increasing its presence in the fields this summer, when Covid-19 was spreading rapidly on some farms across the country. Reports were made of seasonal guestworkers, who often live in cramped farm labor camps, allegedly being forced to work after exhibiting symptoms consistent with Covid-19, or being denied medical care, according to worker advocates and officials for state agencies that teamed up with WHD.

Some of the H-2A cases were referred to DOL by California’s Employment Development Department.

“It was troubling for me to hear of some of the accusations out there—that workers were being forced to work, not getting face masks, not getting proper medical attention, not being properly isolated,” said Cornelio Gomez, who heads California EDD’s foreign labor and farmworker services group. He said his office has been sending farm-related cases to WHD since the summer.

Testing push: The federal agency’s primary emphasis has been to ensure employers test workers exhibiting Covid-19 symptoms, give them medical attention, and isolate those with the virus, Gomez said. DOL spokesmen previously wouldn’t discuss enforcement of H-2A cases, and it wasn’t clear if any of the more severe cases would lead to major penalties or employers being barred from participation in the H-2A program.

The division’s H-2A enforcement responsibilities, while vital during this public-safety crisis, are still limited compared to its bread-and-butter minimum wage and overtime work, which drives the bulk of the annual wage-recovery total.

Double damages: This year’s total also doesn’t reflect the fact the agency since July has been limiting the scenarios in which it would assess liquidated damages to collect double the amount of back pay an employer owes. Double damages paid to workers aren’t included in the annual totals, but if they were, it’s likely there’d be an even larger drop-off in 2020.

Much of the public attention on DOL enforcement during the pandemic instead has centered on the Occupational Safety and Health Administration, which said Friday that it’s fined 85 businesses a total of $1.2 million for virus-related violations.

Paige Smith: Andrea Lucas is set to be sworn in Monday as a Republican EEOC commissioner, two sources familiar with the agency’s plans said, giving the workplace civil rights agency its first full panel of five commissioners during the Trump administration.

Lucas, who comes to the Equal Employment Opportunity Commission from Gibson Dunn & Crutcher, will join newly installed commissioners Keith Sonderling, a Republican who previously served in a leadership role at DOL’s Wage and Hour Division, and Jocelyn Samuels, a Democrat and civil rights attorney.

New staffers will be brought on to help the new commissioners, and some of the early hires are familiar names in the labor and employment ranks.

Gregory Proseus, a former senior counsel for the Senate Health, Education, Labor and Pensions Committee, was hired as Sonderling’s chief of staff. Proseus previously was a special assistant to EEOC GOP Chair

Sharon Alexander, who previously served as a special assistant to Democratic EEOC commissioners, will join Samuels’ staff. The agency confirmed the changes.

Lucas presumably will staff up in coming weeks.

In the short-term, insiders expect the agency’s leadership panel to consider the scope of a rulemaking focused on revamping the conciliation process, an alternative method the EEOC uses to resolve allegations of workplace discrimination.

The public has a few more weeks to comment on the proposed rule, meaning the proposal could be finalized before the end of the year.

The remainder of the agency’s big-ticket agenda items could depend on the outcome of the Nov. 3 election. If former Vice President prevails, the agency’s leadership panel could be in for more changes.

When Trump took office, Victoria Lipnic, then a Republican commissioner, became acting chair. Similarly, a Biden win could translate into an elevated role for either Samuels or the panel’s other Democratic commissioner, Charlotte Burrows.