Ian Kullgren: workers may have given the Democratic majority at the NLRB the perfect chance to reinstate a union-friendly legal standard regarding access to company email and chats.

The newly unionized designers for Activision Blizzard filed a charge with the National Labor Relations Board on Aug. 15 accusing management of spying on workers and booting them off an internal chat about wages, hours, and working conditions.

All of those subjects are protected speech under Section 7 of the National Labor Relations Act, which gives both union and nonunion workers the right to discuss matters of collective importance.

The NLRB has flip-flopped on whether employers can restrict non-work communications on digital platforms. The Trump-appointed majority in 2019 ruled workers don’t have a legal right to use work email and other IT systems to talk about non-work issues—even issues protected under Section 7—because employers have a right to regulate the use of company property.

The ruling, Caesar’s Entertainment/Rio All-Suites Hotel and Casino, overturned the 2014 decision in Purple Communications, in which the then-Democratic majority said workers have a right to use the work systems for protected Section 7 speech. There’s an important caveat in the Caesars decision stating that employers can’t discriminate against protected speech. For example, an employer couldn’t allow a Slack channel of cat pictures but not one about pay equity.

Some are saying the facts of the Activision Blizzard case make it a perfect vessel for the board to reinstate the union-friendly standard. Anne Lofaso, a former board attorney and current labor law professor at West Virginia University, called it a “great vehicle” for the Democratic majority to overturn Caesar’s.

Former Democratic NLRB Chair Mark Gaston Pearce, who was part of the majority in Purple, agreed.

“This standard really needs to be set right by the board,” Pearce said last week. “Cases like this are going to keep knocking on the board’s door.”

Activision Blizzard has denied the allegations, raising the separate issue of vulgarity in the workplace, which has been addressed in other NLRB cases. Company spokesman Kelvin Liu in an Aug. 16 statement accused the union of “preventing the company from protecting our employees from disrespectful or disparaging remarks.” He didn’t specify what was said. 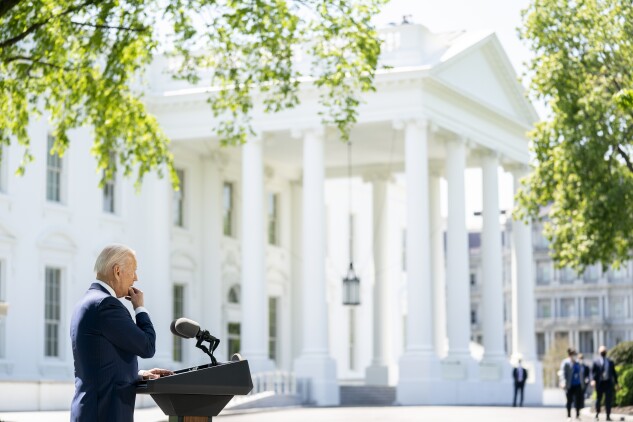 President Biden speaks on the White House’s North Lawn on April 27, the day he signed an order to raise base pay for U.S. government contractor workers.
Photographer: Stefani Reynolds/Bloomberg via Getty Images

Arkansas Valley Adventure LLC and its owner, Duke Bradford, are trying to convince the US Court of Appeals for the Tenth Circuit that the US Department of Labor rule implementing a $15 wage for contractors runs afoul of the Procurement Act and exceeds the president’s authority. Biden issued an executive order in April 2021, directing the DOL to increase the minimum wage for federal contractor’s workers by about $4 to $15.

Bradford argues in part that the president can only use procurement authority to enact policies that result in cost savings to the federal government. In January, a lower court rejected his request to immediately block the rule, finding that the case was unlikely to succeed. The company subsequently appealed to the Tenth Circuit. Oral argument in Bradford’s appeal is scheduled for Sept. 28 in Denver.

If the appeals court were to grant the injunction it would send one of the Biden administration’s signature policy achievements into legal limbo. Biden had campaigned on raising the federal minimum wage to $15 from the current $7.25. But, shortly after a measure to gradually raise the minimum wage to $15 for all workers failed in the Senate last year, Biden then called for a $15 minimum wage for federal contractors via executive order.

The DOL implemented the pay hike in a final rule last year, which affected an estimated 327,000 workers.

Eight GOP-led states also filed two separate lawsuits in Texas and Arizona seeking to invalidate the rule, although those cases are still pending.