President Joe Biden speaks in the Roosevelt Room of the White House on May 13.
Photographer: T.J. Kirkpatrick/The New York Times/Bloomberg

Ben Penn: The U.S. Labor Department faces a decision that will reveal the Biden administration’s willingness to have the federal government step up its role in paying unemployment benefits to laid-off workers, rather than let states shoulder most of the load.

The department, which oversees the federal-state jobless-aid system, must determine how it will distribute $2 billion in unemployment insurance administrative funding that Congress provided in the American Rescue Plan.

The decision has taken on an added dimension amid pressure from worker advocates and Sen. (I-Vt.) for the administration to push back after GOP governors in more than a dozen states chose to end participation in expanded jobless-aid programs before they expire in September.

While it looks increasingly unlikely the administration would launch a political war by trying to block states from opting out, DOL separately has broad discretion to keep a significant portion of the Rescue Plan funding.

The March virus-relief law requires DOL to use the $2 billion to cover either federal administrative costs for unemployment insurance, system-wide investment in unemployment infrastructure, or state grants.

The purpose of the spending must be to “detect and prevent fraud, promote equitable access, and ensure the timely payment of benefits,” the law states.

Worker advocates and even some states are calling on Labor Secretary to keep the money to strengthen the federal government’s long-term role in ensuring eligible workers can efficiently access benefits, particularly to prepare for the next economic downturn.

The mostly Republican-led states that have opted to cancel supercharged federal benefits described it as a necessary move to goose people to rejoin the workforce. But Jenna Gerry, a senior staff attorney at the National Employment Law Project, said it “shows just how much giving money to states directly doesn’t help workers.”

The left-leaning organization is part of a coalition of worker advocates and unions urging Walsh and the White House to take a more proactive role. One option is for DOL to build a modernized tech portal for unemployment claims that could be shared with states.

“We’ve seen in the past that when money is given directly to states for modernization, that does not help workers,” Gerry said, citing Florida as an example and noting it built a software system designed to make it harder for workers to get paid. Labor Secretary Marty Walsh and Vice President Kamala Harris, who head the White House task force on union organizing, take part in one of its meetings, in May.
Photographer: Anna Moneymaker/Getty Images


At a House Appropriations subcommittee hearing April 28, Walsh offered a glimpse of his thinking.

“I believe there’s something like $600 million, $700 million that’s going to go into technical support for states,” he told lawmakers.

If that figure is reflected in the agency’s final decision, roughly $1.4 billion would be left for DOL.

A department spokesman said “plans for the funds are still being finalized.”

After 14 months of elevated claims numbers, some states still must root out fraudulent claims and make timely payments to qualified Americans—with workers of color disproportionately struggling to get checks.

“I fully expect a well-balanced disbursement, but I am hopeful that most of the money goes to fixing UI nationally, and to giving more support to the states by having a better system for us to plug into,” he said. “The problems we’ve seen with identity theft and fraud are ripe for a federal solution.”

Walsh must be wary of accusations of federal overreach if DOL were to expand its presence in the unemployment system. And, of course, the most substantive ideas for reform will require Congress to update existing law.

Paige Smith: Federal contractors are grappling with how to prepare for President ’s executive order raising the minimum wage to $15 an hour for their employees.

“We have a lot of questions, but we don’t have a lot of answers,” said Robert Magovern, an attorney with Cozen O’Connor in Washington.

More immediately, businesses navigating the cutthroat process of bidding for federal contracts must estimate what agencies might expect in terms of pricing.

“That leaves businesses that are currently bidding for contracts wondering whether they should be incorporating these higher rates into bids now,” said Paul DeCamp, who ran DOL’s Wage and Hour Division in the George W. Bush administration.

Bidders normally keep their pricing as low as possible while still remaining profitable, but it’s not known whether federal contracting agencies will prefer bids that incorporate the minimum wage increase earlier on, he said.

The order builds on the Obama-era wage boost to $10.10 for employees of federal contractors. It could apply to as many as 390,000 workers, roughly half of them Black or Hispanic, the Economic Policy Institute estimated.

Biden’s move, as Magovern noted, may pressure contractors to boost pay for all workers, not just those working on federal contracts.

“The increase to $15 for federal contract workers is a great first step by the Administration, and the direct result of workers, and workers of color in particular, organizing to elect Joe Biden president and for a better workplace at low-wage federal contractors like Maximus,” Alex van Schaick, counsel with the Communications Workers of America, said in an email. (Bloomberg Law journalists are represented by a division of the CWA.)

The union has advocated on behalf of workers employed by Maximus Inc., a publicly traded contracting giant that employs call center workers for Medicare.

“Maximus has been actively working to raise the Service Contract Act (SCA) rates for our employees since we acquired the Medicare Contract Center Operations contract in late 2018,” said Madison West, a spokeswoman for Maximus. “We are thankful that President Biden has issued this Executive Order, and Maximus fully supports it.”

Once a $15 floor is locked in, the Wage and Hour Division must enforce it by investigating contractors’ payroll practices—and that raises a boots-on-the-ground question. 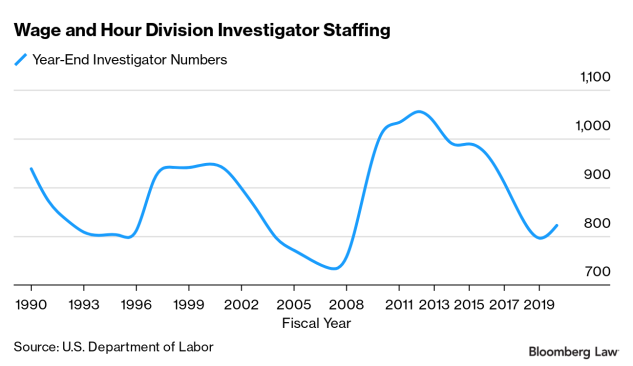 The White House proposed bolstering WHD enforcement in its request for DOL to get a 14% budget boost, but Congress is a long way from finalizing fiscal 2022 spending.

Between Biden’s order and the possibility of DOL getting more resources, Magovern said he’s warning contractors to reevaluate their practices.

“We’re telling people it will be a new world for Davis-Bacon and SCA enforcement,” he said, referring to the Davis-Bacon Act and the McNamara-O’Hara Service Contract Act, two wage-focused laws WHD enforces.

That warning is consistent with DOL’s ongoing strategy to heighten enforcement of government contractor prevailing-wage laws, as Bloomberg Law reported in February.

Even with the number of WHD investigators down relative to prior years, the agency will try to show federal contractors it means business, said Brett Bartlett, a partner with Seyfarth Shaw.

“Any business will be well-advised to spend time thinking about how they will react to an investigation,” he said.